The Killer Must Kill Again

Philandering playboy Mainardi (George Hilton) has a problem: how can he be rid of wife Nora (Teresa Valasquez) whilst holding onto her family's fortune. 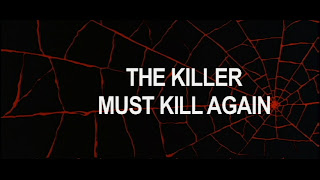 The film's title sequence evokes its original Web of the Spider name; a web in which all involved are ultimately to become fatally ensnared.

Divorce, Italian style is the answer, when Mainardi happens upon a black-clad assassin (Antoine St John) in the act of disposing of a victim and makes him an offer that cannot be refused. If the killer will take care of Nora, making it look like a kidnapping, he can collect $20,000. If not then Mainardi will go to the authorities. 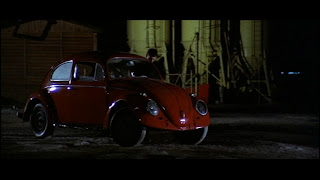 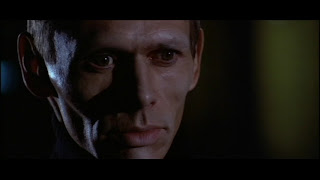 Would you trust someone you had just witnessed disposing of a body to successfully pull of a hit without complications?

The killer accepts and the deed is soon done. But as he returns to the apartment to tidy up fate intervenes. A young couple, Luca and Laura (Alessio Orano and Cristina Galbo) notice the keys in the ignition of his car and drive off.

Thinking fast, the killer hotwires a car and sets off in pursuit, eventually catching up with his quarry – still oblivious to the body in the boot – at an isolated beach-front villa. (Note the similarities here with Cozzi's Door into Darkness episode.)

In the meantime, the car's theft has led Mainardi's neighbours to call the police. Thus he turns home, alibi at the ready, to unxpectedly find a detective waiting with some awkward questions...
Luigi Cozzi presents something of an enigma: how can someone so knowledgeable and so honest in his love for cinema make such bad films as Contamination and Starcrash. On the evidence of The Killer Must Kill Again, one answer is that he was unfortunate to see the fantasy cinema increasingly dominated by big budgets and expensive effects.

For this giallo – completed in 1973 but shelved until 1973, and thereby perhaps missing out on the opportunity to have the boom-period impact it should have – is propelled first and foremost by ideas.

The central one, the challenge that Cozzi has set himself, is whether he can make a giallo – and note here the recurrence of the filone colour – that has no mystery element to it and correspondingly eschews key devices like subjective shots from an unseen killer's perspective, in favour of a transparently obvious narrative, yet still engage the spectator and keep them in suspense. 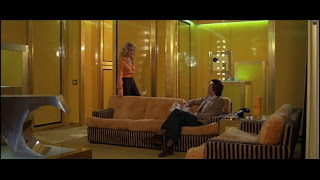 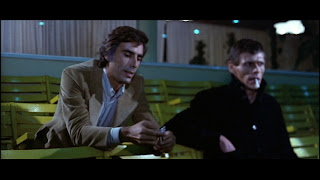 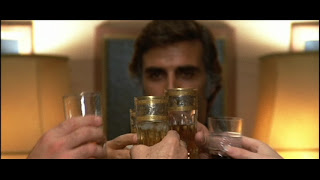 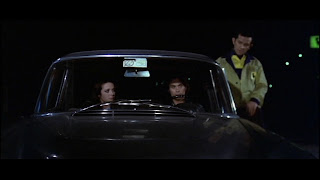 ... everywhere; and a nice nod to The Bird with the Crystal Plumage besides

The answer, felicitously, is a resounding “yes” for a film that could well be understood as the giallo equivalent of Edgar G. Ulmer's noir masterpiece Detour, with which it shares the same perverse Murphy's Law logic and serves as similar object lesson in how to make the most of the resources at one's disposal.

In general Cozzi emerges as classicist to his mentor's modernist, exhibiting a preference for techniques dating back not only to Hitchcock – and here we can note the neatness of the killer's lighter with the initials DA as intertextually referencing Dario Argento via Strangers on a Train, along with a coincidental version of the inverted signifying chain some have detected in that film's Bruno Anthony character's initials against those of Guy Haines – but also D W Griffith, using irising and, above all, cross-cutting to enhance mood and embellish tension. 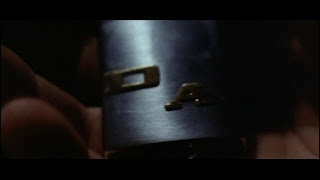 Initials DA rather than BA or GH 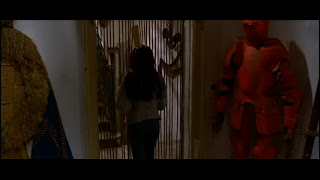 Another strange mannequin-type figure on the right

One moment that stands out in particular in this regard is the director's juxtapositon of rape and sex scenes in a way that makes it all but impossible for the (male) spectator to take pleasure in the latter. (Men are pigs, yeah...) Half-intended it may be, in that the previously unmentioned Femi Benussi is deployed strictly as get naked and die material – Strip Nude for Your Killer, indeed – but it nevertheless raises questions for those who would dismiss a film like this or a filmmaker like Cozzi as beneath them.

It is also about the performances that Cozzi draws from his leads; and here he is perhaps even in advance of his mentor, whose bad experiences with Tony Musante's method antics famously soured himself against the acting profession for many years. Or, perhaps – seeing as Hilton plays the same suave, sophisticated and shifty type he always does in these films and that St John probably could not but be menacing thanks to that distinctive cadaverous, haunted physiognomy – that it is simply a case of Cozzi knowing when he was onto a good thing and consciously not getting in the way.

In terms of my ongoing Cozzi as key Gothic influence on Argento thesis, meanwhile, two things are worth noting. First, the killer carrying out Nora Mainardi's corpse Dracula style. Second, the coincidental mirroring between Mainardi's opting for a killer whose finding in flagrante delicto implies a lack of professionalism – compounded by the viewer's awareness of his psychopathic tendencies – and Baron Frankenstein's use of asylum-patient material that would not have passed muster earlier in his career in Frankenstein and the Monster from Hell. In both films, that is, the plot point grants a certain inevitability to the failure of the protagonists' best laid plans. 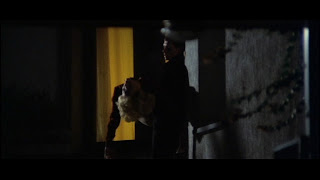 The Bride of the Monster?

Mondo Macabro's impressive DVD of the film describes it as “a lost giallo classic”. They are not wrong.
Posted by K H Brown at 17:27

if you are ever in Roma, you should go and pay a visit to Luigi in his Profondo Rosso store. He is very frendly, speaks agood English and ready to chat about his past as a film-maker. Also, you will be able to purchase there a number of self-published books that he wrote and that I believe are not available anywhere else.

An amazing movie,just a shame Cozzi never made anymore like this(Contamination is great but compared to this...).
Those Profundo Rosso books look good esp.Citta' Violente 1+2 and the Castellari one,also some are printed in English like Giallo Argento which Cozzi wrote himself.