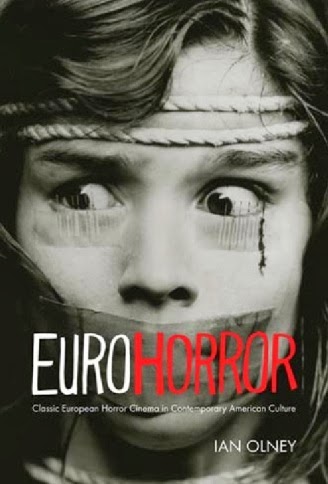 Olney begins by this academic study by demonstrating that European horror cinema of the 60s through 80s has a surprisingly high profile amongst contemporary horror audiences. As evidence of this he cites the successful re-releases of Eurohorror by Grindhouse Releasing along with lavish DVD releases of both acknowledged genre classics such as Lucio Fulci's The Beyond and decidedly lesser entries such as Bruno Mattei's Hell of the Living Dead.

Following this Olney indicates that fan interest in Eurohorror has thus far not been paralleled with equivalent attention amongst academics, with the exception of some hybrid fan-academics. Olney posits that this paucity is partly explicated by the generally marginal position of European popular and genre cinema as a whole. It is also a reflection of the inherently problematic nature of many Eurohorror texts as far as progressive-minded critics are concerned, given not only their apparent sexism, racism, misogyny, and homophobia, but also their tendency to present transgressive combinations of sex and violence.

Olney then introduces his theoretical route out of this impasse, namely the concept of peformative spectatorship. Drawing upon the work of Judith Butler in particular, he posits that the distinctive challenge and opportunity posed by Eurohorror films is their uneasy dynamics. Whereas the Anglophone horror film invites our identification with the hero-protagonist, the Eurohorror film allows us to identify now with the hero-protagonist and now with the monster-antagonist. Paralleling this they allow us to take the roles of both sadist and of masochist.

It is a strong thesis and one which Olney then goes on to demonstrate via detailed textual analyses of a range of Eurohorror films, including films by Dario Argento (Suspiria, The Bird with the Crystal Plumage), Mario Bava (The Whip and the Body), Jesus Franco (Eugenie de Sade, Eugenie.. the Story of her Journey into Perversion, Fulci (The House by the Cemetery, The New York Ripper), Ruggero Deodato (Cannibal Holocaust), and AntonioMargheriti (Cannibal Apocalypse) amongst others.

There were two aspects of Olney’s analysis which I found slightly disappointing. First, there is little French or German Eurohorror cinema mentioned, with a strong bias towards Italian product. Second, why he looked at women and prison and nunsploitation films in the context of their sadistic-masochistic dynamic while omitting a third strand of women in total institution exhibiting similar dynamics, namely the Nazi sadism film. I would speculate that this is because it is relatively harder to get the typical viewer to temporarily align themselves with the Nazi. This is doubly so when it comes to the continental Europeans of the 1970s who would have been the original audiences for these films.

The challenge now is perhaps one of operationalising the concept of performative spectatorship and seeing how useful it is with actual audiences  - i.e. bridging the theory/practice divide.

As it is, Olney’s ideas would appear applicable to many other European horror films that he does not discuss. Two that they made me think of were Terence Fisher’s Dracula and Werner Herzog’s Nosferatu the Vampyre and their respective treatments of the Jonathan Harker character. In Fisher’s film Harker is a vampire hunter intent on destroying Count Dracula, but falls prey to Dracula’s bride and thus himself turns into one of the undead. At this point his fellow vampire hunter Van Helsing becomes the narrative focus and destroys Harker. In Herzog’s film the destruction of Dracula leads to Harker, here just a lawyer, becoming the reincarnation of Dracula. Put another way, Fisher’s Anglo horror film retains the boundaries that Herzog’s Eurohorror film transgresses.
Posted by K H Brown at 15:17 2 comments: