Compared to some of the subjects of author Bruce Hallenbeck's previous books, most notably The Hammer Vampire and The Hammer Frankenstein, The Amicus Anthology likely provided a greater challenge -- one that he thankfully rises to.

For the Hammer Frankenstein films, excepting the one-off spoof/parody Horror of Frankenstein, are unified by the constant presence of Peter Cushing in the title role and, barring The Evil of Frankenstein, Terence Fisher as director/auteur. The Amicus anthology films, by contrast, were directed by Freddie Francis and Roy Ward Baker in approximately equal numbers and had no recurring characters.

The history of Amicus is intrinsically linked to that of its rival. Milton Subotsky presented Hammer with a script for a Frankenstein film. Hammer's bosses didn't like it, but learned that Mary Shelley's characters were out of copyright and thus made their own treatment. This became the epochal Curse of Frankenstein.

Subotsky and other Amicus mainman Max Rosenberg responded to Hammer by employing Christopher Lee for the atmospheric City of the Dead. While not an official Amicus film its present-day setting would emerge as something differentiating Amicus and Hammer horror on aggregate.

There are, in my opinion, three key reasons why The Amicus Anthology works.

First, Hallenbeck provides historical context to the horror compendium film in his opening and closing chapters, which reference the likes of Waxworks, Dead of Night, and Creepshow.

Second, he contextualises Amicus's anthologies in relation to their single-story horrors, such as The Skull, and their non-horror films, such as the Amicus in all but name Dr Who adaptations with Cushing as (a) Who. (This Amicus/Who nexus is worth noting, with third and fourth Who's Jon Pertwee and Tom Baker both appearing in Amicus anthology horrors.)

Finally, Hallenbeck makes you think: Do you prefer to see Amicus's guest stars or Hammer's character actors? Do you prefer segments or wholes? Do you prefer humour as punchline or intermittently? Does a great segment outweigh a good film?
Posted by K H Brown at 06:17 2 comments:

Doc of the Dead

As an introduction to the zombie film this documentary is a disappointment. There are two major reasons for this.

First, while the inaugural zombie film, White Zombie (1932) is referenced, the history presented is very much from Night of the Living Dead (1968) onwards. Certainly, George A. Romero’s film inaugurated a paradigm shift in the nature of the zombie, from labourer-producer to flesh eater consumer, but this point could have been made clearer by referencing, for example, Plague of the Zombies (1966) as a point of contrast.

Second, all the films mentioned – others include Return of the Living Dead (1985), Shaun of the Dead (2003), and 28 Days Later (2002) – are Anglo-American. The contributions of continental European film-makers are entirely absent. This is a problem when you remember that Romero’s Dawn of the Dead (1978) was a co-production with Dario Argento and that the film’s success at the Italian box-office led to several tribute productions. Two of particular note here are Lucio Fulci’s Zombie (1979), for its fusion of old school voodoo zombie and new school flesh-eater, and Umberto Lenzi’s Nightmare City (1980), for featuring running zombies more than 20 years before 28 Days Later or the remake of Dawn of the Dead (2004).

With the film running only 82 minutes and feeling padded out even these these omissions are all the more striking.

And, finally, if you are going to feature Joanna Angel talking about her zombie-porn crossover shouldn’t you also mention that Joe D’Amato, was there first?
Posted by K H Brown at 01:17 No comments:

With Headpress's Offbeat editor Julian Upton presents 400+ pages on what the book's subtitle identifies as "British Cinema’s Curiosities, Obscurities and Forgotten Gems." Other than mentioning the films encompassed within this remit only cover a thirty year period from c. 1955-85 (so no Tod Slaughter or 30s Edgar Wallace adaptations, for instance; though there are certainly other places you can read up on these) it is a fair enough description of the films surveyed and reviewed within. 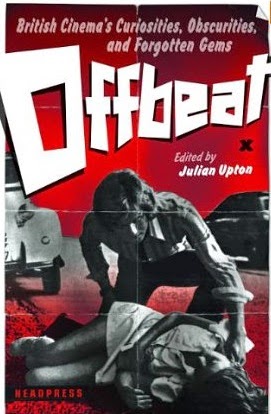 So, for example, if we’re talking Hammer then it is emphatically not the Gothics for which they are best known, rather their swashbucklers and adventure romps like Captain Clegg and Pirates of Blood River, or the brilliant Cash on Demand where Peter Cushing is for once outperformed by another, Andre Morell; admittedly Morell had played his role on TV and so had the advantage. Or, if it’s Hammer’s most famous house director, Terence Fisher, then it is one of the three sci-fi films he made for another studio, Planet, namely The Earth Dies Screaming.

I’d like to think that I’m somewhat close to the ideal reader for the book, arrogant though you may judge me: I’ve seen about half of the films reviewed within and would say that I concur with the authors most of the time on these. Two things help here. One, the reviewers resist the urge to proclaim each and every film as a forgotten mini-masterpiece or suchlike. Rather they accept the films on their own merits, or lack thereof. Two, they provide their working rather than just their correct answer. That is they explain why they feel the way they do about a film. As such even if I do not agree with the reviewer of No Blade of Grass’s opinion I can understand that he is paying attention to the source novel, whereas I was not considering the film in terms of adaptation.

Even more important, however, is that Offbeat provided further encouragement to seek out those titles I had heard of but not seen, and introduced me to others which I had not, or which I might have grokked at some point but since forgotten.

In addition to the reviews Offbeat also presents several overviews of a time period, sub-genre, cycle or trend. These are informative as an orientation and also point out topics of further consideration. For example, the essay on the pop/rock musical posits a significant difference between the Elvis films from the US and the Cliff Richard and British Invasion films from the UK that followed them. The Elvis films were entrusted to older, established directors who worked to make Elvis a safer property, whereas the British films often took chances on younger filmmakers closer in age to their subjects, this resulting in a less predictable fare. The reviews generally run two or three pages, begin with production, cast and crew details, followed by a one-paragraph summary of the plot, followed by a more substantial discussion of the individual film’s merits (or lack thereof) and place in British cinema history.

So, to sum up, if you read this you would probably like Offbeat.
Posted by K H Brown at 21:08 2 comments:

It's been a while since I last posted, having been busy with other things. On this occasion, however, there's a bit of crossover.

I'm doing a pilot study for a bit of research on horror film audiences. There are basically four questions:

1. Do you like US and UK horror films? The answers here are yes, no and it depends on the film.

2. What do you especially like and/or dislike about US and UK horror films?

3. Do you like continental European horror films. Again, the answers here are yes, no and it depends upon the film.

4. What do you especially like and/or dislike about US and UK horror films?

Either leave your answers as a comment or email me at hennesseybrown@gmail.com