Abducted by the Daleks

Well, if you are familiar with any of other ‘films’ by director Don Skaro under his other pseudonym Roman Nowicki, you’ll anticipate that is is minimal.

The auteur of the Fantom Kiler and Fantom Seducer series is not exactly known for complex plotting. Rather it is about stringing together a few scenes with the same basic slasher/porno dynamic. Woman gets naked, then woman gets killed (in the former) or fucked (in the latter).

This is much the same, following the softcore dynamic of the former series, with Daleks in the place of Fantoms.

We begin with four women in a car, travelling through woods reputed to be the domain of the Serial Skinner, clearly a close cousin to the Fantoms.

Their car hits something (which we see is a Roswell type alien) so they get out to explore. Three of the four soon end up naked and prisoners of the Daleks.

Here I found it impossible not to think of Victor Lewis Smith’s TV Offal and his Gay Daleks skits, and of Jon Pertwee era Who companion Jo Grant actor Katy Manning appearing topless with a Dalek.

That said, the special effects are probably better than the original Who, if only by virtue of being 20-30-40 years later. (Is there a CGI setting to do CSO?)

The Daleks intervene, attempting to teleport her back to their craft, but get the Skinner instead...

There are amusing aspects to Abducted by the Daleks, such as some of the credits (besides Don Skaro the script is by one Billy Hartnell, for instance) and the Star Trek TOS door opening/closing sound, but overall it is a tedious watch even at just 55 minutes.

Maybe Big Finish and Johnny Trunk / Wisbey should do an audio collaboration inspired by this?
Posted by K H Brown at 01:58 No comments:

The new issue of Little Shoppe of Horrors, devoted to Hammer’s Vampire Circus, courtesy of the fine folk at Hemlock Books arrived earlier this week. I had a vague personal interest in this issue as, in the late 1990s, I was involved with a university film society screening in which one of the film’s actors, Laurence Payne, was in attendance. Unfortunately I could not remember much about the Q&A after the screening and so was unable to provide publisher/editor Dick Klemensen with anything that could have been included in the issue. 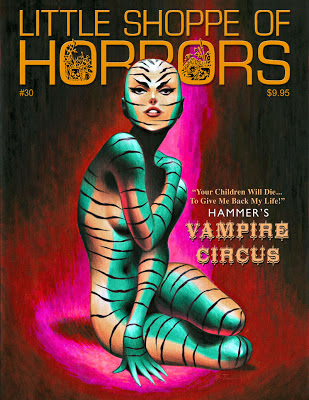 One thing that I did do for the film society screening (self-promotion...) was prepare a programme note, a page of smallish type, maybe seven or eight hundred words on the film. Watching Vampire Circus and comparing it to other Hammer films that I had seen to that point – basically whatever had turned up on the four terrestrial UK channels, with the exception of Terence Fisher’s So Long at the Fair, which I had annoyingly failed to set the VCR for – I was struck by how atypical it was.

There was no obvious savant to oppose the monster. Nor, indeed, was there an obvious monster, the lead vampire Count Mitterhaus having been dispatched in the prologue – a sequence that would have likely presented the climax of an earlier Hammer vampire film, or been given a brief recap before plunging into the main narrative, Dracula Prince of Darkness style. The approach was more ensemble based, with character actors rather than stars. You have Thorley Walters, for instance, but no Peter Cushing. As the film went on, it became increasingly fantastique – i.e. Continental, European, not stolid British, physical, Manichean Hammer, in the Terence Fisher mould. There was the tantalising prospect that evil might, for once, win.

So I put all this into my programme notes. I doubt if anyone else in attendance would have got these references. (Okay, so I'm an arrogant SOB...)

Now, reading the various contributions to this issue I feel vindicated. What I said, what I thought, seems broadly in line with what the contributors here felt. (Okay, so I'm an arrogant SOB #2...)

Away from the Vampire Circus related material, Klemensen continues to present a meta-commentary on fandom via his reviews. His magazine also continues its commitment to looking at lesser-known Hammer personnel, through an insightful and tragic interview with actor Peter Arne, unpublished for 30 years, Arne being murdered soon after.

All told, anyone who is a fan of Hammer, British Horror, or even cult cinema in general should get this.
Posted by K H Brown at 07:42 1 comment:

If you are at all interested in the UK video nasties affair of the early 1980s you have to go here. The creator of the site, devoted to Sam Raimi's The Evil Dead, has meticulously went through UK newspaper archives, many on microfilm and held at the British Library in London, to re-produce hundreds of newspaper articles on the nasties.

I am only one-sixth of the way through one of the PDF's, but it is already giving me new information - and I say this as someone who has read Martin Barker's The Video Nasties; David Kerekes's See No Evil; John Martin's Seduction of the Gullible; Kate Egan's Trash or Treasure, and watched almost all of the nasties, including the likes of Mardi Gras Massacre and Cannibal Terror, along with various documentaries on the affair.


I can only say thank you to the person who has produced this invaluable resource.
Posted by K H Brown at 06:44 1 comment: