Although author Daniel Ekeroth gives no precise definition, sensationsfilm can broadly be understood as Swedish vernacular or exploitation cinema for the most part. It was a type of cinema that lasted around 40 years, from the early 1950s to 1990s, when industrial and other changes rendered it redundant. 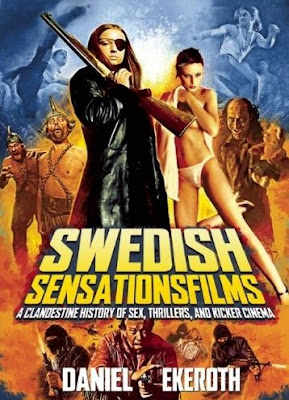 Bergman’s Summer with Monika was, after all, distributed in a shortened, dubbed, rescored version in the US as Monika: The Story of a Bad Girl while the same director’s rape-revenge horror The Virgin Spring not only famously inspired Wes Craven’s The Last House on the Left but has also been identified by John Waters as the first film to feature scenes of vomiting.

Contrariwise the Swedish censors tended to take a harder line as far as violence was concerned, with mitigating circumstances and exceptions for social engineering purposes.

Here, Ekeroth discusses the film which inaugurated the “kicker” cycle of the 1980s. This youth group got their name from their liking for kicking things, including phone booths. An official film with the intention of discouraging such activity had, perhaps predictably, the opposite effect.

An aspect of certain sensationsfilms which may be more problematic today in some territories are sexualised images of adolescents in some titles; as Ekeroth notes the child pornography laws introduced in the late 1960s were comparatively lax.

Following a useful introductory overview, Christina Lindberg (the most recognisable name, face and body associated with the genre) provides her memories of the genre. This is followed by a longer alphabetical reviews section. Each film gets a page to itself, punctuated by individual pages of black and white poster, lobby card, video box and still reproductions and colour sections. The reviews generally have the format of a synopsis followed by a commentary and points of interest, along with a typically dismissive contemporary review from a respectable critic. Ekeroth is unsurprisingly more positive, but is thankfully not blind to the considerable variations in the films’ levels of ambition and accomplishment.

The alphabetical approach has its pluses and minuses. On the one hand it makes it easier to find a particular title should it crop up somewhere. On the other hand it makes it more difficult to chart the development of particular filmmakers and performers careers, such as they were.

On balance, however, it works, thanks to a generous degree of cross-referencing and shorter sections after the reviews giving profiles and filmographies for some of the most important names (besides the aforementioned Lindberg these include US-expat Joe Sarno, whose shift from the softcore productions of the late 1960 to harder fare ten years later is characteristic, and Bo Vibenius, whose little seen Breaking Point sounds like an outré must see comparable with the likes of Alberto Cavallone) along with a listing of the top 20 sensationsfilms (also often the ones which are easiest to access internationally, including Vibenius’s Thriller: A Cruel Film, starring Lindberg)

A valuable guide to one of the hitherto uncharted areas of world exploitation that comes highly recommended. Where else would you learn about the 'Lingonberry' western or a series of five colour-referencing detective films including the pre-Bava and apparently Blood and Black Lace like Mannequin in Red?
Posted by K H Brown at 23:32 No comments:

Edited by Darrell Buxton of Pass the Marmalade, this new volume from Midnight Marquee is a comprehensive guide to British horror films of the 1960s.

The bulk of the 220-page book is comprised of year by year listings of titles, each of which gets one or two detailed reviews. 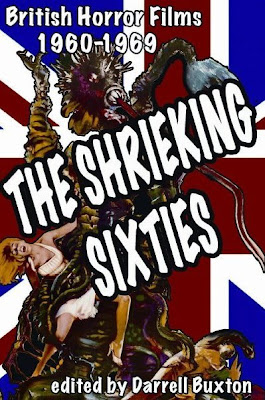 Horror is defined in broad terms, such that some science-fiction and fantasy films like Dr Who and the Daleks and Jason and the Argonauts are included, along with certain sui generis entries including Girly and The War Game.

British horror is defined in terms of being a UK production with the consequence that the likes of Jess Franco’s films for Harry Alan Towers are included whereas Michael Reeves debut The She Beast is not.

Although the usual suspects from Hammer, Amicus and Tigon are well represented, the real strength of the book lies in bringing less well-known films and filmmakers to light.

Some names and titles that are prominent in this regard are Vernon Sewell, with House of Mystery, The Man in the Back Seat and Strongroom; Robert Hartford-Davis, with The Black Torment, Corruption and Incense for the Damned and an abortive Titus Andronicus; the self-explanatory pre-Reptile The Snake Woman; the British Sign Language film The Return of Dracula, and the apparently woeful The Vulture.

This aspect is also to the fore in the appendix of short films, which includes early entries from the likes of Michael Armstrong, the odd Harrison Marks skin-flick and some even more obscure sex films.

The reviews are informative and manage to raise some interesting points without getting bogged down in over-analysis. So, for example, a queer subtext to Gorgo is brought out, without ignoring the fact that it is first and foremost a monster movie.

In his introduction, Buxton identifies a number of inspirations and models – Fragments of Fear, English Gothic, Ten Years of Terror and A Heritage of Horror. His book can stand tall in this company and is a must read for fans of British horror cinema.
Posted by K H Brown at 22:14 No comments:

Interesting things are afoot at the BBFC it would seem.

Ruggero Deodato is currently working on a director's cut of Cannibal Holocaust that will feature less animal cruelty. It seems a copy of the film was submitted to the BBFC and the only one of animal cruelty scenes that was going to require cuts was the killing of the small rodent type animal. A reason this was unacceptable was that whereas the other animals killed on camera were consumed for food, this was not.

There's something of an irony here in that within the diegesis of the film this animal is one which is eaten (the guide who kills it actually remarks 'tonight we eat meat' or something like that) whereas a pig that gets shot later is presented as not being eaten ("that pig would have been food for those people').

Context based guidelines just get harder to understand the longer you think about them contextually...

[There's loads more on the topic at the Cult Labs forums]
Posted by K H Brown at 18:49 1 comment: