Both of them are actually the locandine rather than the 2/4 sheets, and have the same artwork but in a different format with the usual space above the image for the cinema to include the screening date / time information. 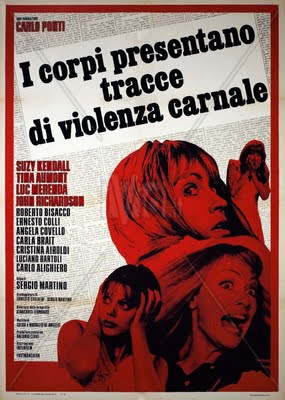 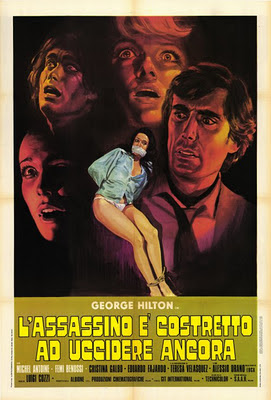 The Killer Must Kill Again
Posted by K H Brown at 13:57 3 comments:

Rather, Trhauma is the actual title of this 1980 giallo-slasher entry from Gianni Martucci and Alessandro (“Al”?) Capone.

The story begins with a prologue, recalling Halloween, Friday the 13th and, indeed, Nine Guests for a Crime: One boy convinces another, who seems to be be blind in one eye, to climb a tree, which he then falls out of with apparently fatal results.

Following this we cut to the present as a group of bourgeois types arrive at a holiday home in an isolated area. Soon two of them, a photographer and his model, wander off to do some shooting. After they become separated, she’s killed by one-eyed jack, now a man. 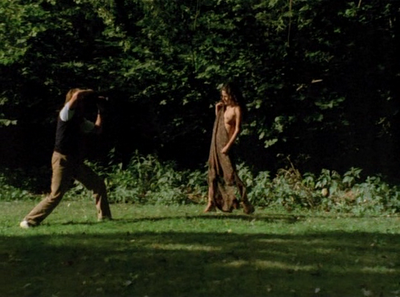 Less than ten minutes in and we have a naked woman

The others are concerned about her absence, but don’t do anything about it until it’s too late and the phone lines have been cut. As the killer closes in and the body-count rises, we learn some of their secrets, including gambling debts, lesbian affairs and blackmail. 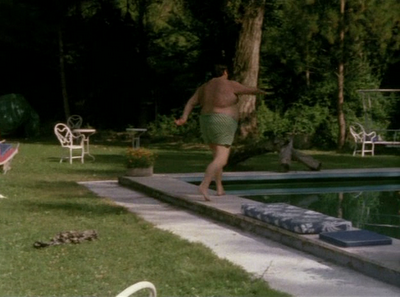 Eventually a final girl/woman is identified and a tense extended stalk and chase scene ensues. The abrupt resolution and closing epigram, however, seem more giallo than slasher, bringing things back full circle.

An unpretentious and effective little film that doesn’t outstay its welcome and delivers on suspense, shocks and sleaze and sees the filmmakers make good use of their locations.
Posted by K H Brown at 06:28 No comments:

The main weakness of this adaptation of Bryan Edgar Wallace's The White Carpet is that it's really two stories in one, both having enough in them to make a single film.

The Mad Executioners title refers to a group of hooded figures who try, judge and hang those who would otherwise have evaded justice. As the noose they use comes from the Black Museum, it is highly likely that someone within Scotland Yard is party to this conspiracy. Worse, some in the the underworld quickly see the potential for establishing their own copycat courts within their gangs.

Meanwhile, a mad scientist carrying out experiments into trying to keep heads alive sans bodies by connecting them up to mechanical lungs and hearts. His modus operandi is to abducts young women, take what he needs and then dump the rest across London.

While the narratives do intersect somewhat on account of the sister of one of the investigators falling victim to the madman and the female heroine then going undercover in a bid to ensnare him, its notable that this latter scene does not actually provide the climax to the film as it would undoubtedly have done so had it been a single narrative.

Modern art is equated with madness, this painting being done by an artist under the influence of opium

Despite being produced by Artur Brauner's normally frugal CCC the film looks to had a decent amount of money spent on it, with some particularly impressive sets for the executioners' base and the mad scientist's home-cum-laboratory.

Edwin Zbonek's direction likewise pleases, as does Richard Angst's crisp black and white widescreen cinematography. One scene sees them present an otherwise tedious bar-room musical number in a long take that performs a 360 degree circuit of the set.

The performances are variable. Dieter Borsche is nicely sinister and driven as the mad scientist, whereas Chris Howland's investigative reporter Gabby Pennypacker is more annoying than funny in the Eddi Arent type comic relief role. Maria Perschy makes for an engaging female lead on account of being a bit more active and less of a screaming victim type than usual, with the sparring between her and Borsche as he tries to drug her drink and she tries to avoid this another delight.
Posted by K H Brown at 16:45 No comments: