I have been reading The American West in Film: Critical Approaches to the Western, written by Jon Tuska and published in 1985. Tuska is concerned with seeing how the images of the West presented in Western writing and in Hollywood films (specifically) are true to history.

Unsurprisingly Tuska finds that the films are rarely accurate, with this reflecting a lack of research and/or the deliberate obfuscation of truths about ‘how the West was won,’ namely through violence, treachery,  and genocide.

Then, in his conclusion, Tuska mentions the snuff film, which he views as actually existing, but apparently without bothering to undertake any research or fact checking.

Watching Abuso di potere – i.e. literally Abuse of Power, but released under the more enigmatic Shadows Unseen – in the same week as Berlusconi was jailed gives the 1972 film a certain continuing relevance.

The more things change the more they stay the same...

On a more personal level, it was also interesting to compare with my viewing of a few days ago, Colpo rovente, it being another police film exploring the same theme, high-reaching corruption, but a contrasting narrative structure.

For whereas Colpo rovente begins with a death at the hands of persons unknown, here we begin with a death where the identities of at least some of those involved, if not their exact roles, are presented.

Investigative journalist Gagliari goes to a club; talks briefly with Simona (Marilu Tolo); visits money lender Rosenthal (Corrado Gaipa), from whom he recovers a distinctive ring; indicates that he is leaving on business for a few days; departs with hooker Rosaria, and is then set upon, beaten and shot dead by a group of men.

After some discussion amongst the police and political leaders, the decision is made to bring Inspector Luca Micheli (Frederick Stafford) in to conduct the investigation. Micheli has been persona non grata since he used the same illegal methods as many of his colleagues, but happened to do so on the wrong suspect/perpetrator – i.e. someone with connections. He’s also, predictably, the type whose dedication to the job has cost him his family.

Aided more or less only by his loyal sidekick, Micheli begins his investigations. An anonymous tip-off leads them to Delogo, a known mafioso with an impressive record on beating the charges against him. After a beating Delogo confesses to the crime, but Micheli’s intuition tells him what we would already know, even if we had walked in to the film five minutes late; after all, we’re only one-third of the way into the running time.

Getting the forename of the woman seen with Gagliari, Micheli pulls in a low-level drug dealer (Pasolini regular Ninetto Davoli) and extracts here whereabouts, this time more with the threat of violence. Visiting Rosaria’s apartment, the investigators find her dead, the victim of adulterated heroin. And so it goes until it becomes increasingly evident what we already more or less knew.

The only matters that remain in doubt are whether Micheli will agree to forget what he discovers and become one of the conspirators, or whether he will continue to fight against them and, if so, with what type of outcome.

Extreme cynicism was rife in the police film internationally in the early 1970s, as a basic schism between the ideals of law and order became increasingly apparent. To give a few examples:

Callahan in Dirty Harry knew that Scorpio was the killer stalking San Francisco, but could not prove this and found his methods led to Scorpio’s being released by too-liberal judges.

Then Magnum Force saw Callahan going up against a self-appointed execution squad of fellow cops who were going too far – a plot point that seems more about box-office than consistent characterisation, at least from a cursory recollection. Certainly I remember preferring Steno’s La polizia ringrazzia, with its decidedly more downbeat treatment of a similar theme.

Or in the UK there is the first film outing of The Sweeney, in which Regan reluctantly investigates the death of a call-girl at the behest of a small-time villain, then realises he has uncovered a big-time conspiracy when said villain also dies and he is suspended from the force on trumped up charges. While the X-certificate given the film allowed for more sex, violence and bad language than the TV series from which it came, its televisual origins were also apparent. There was an obvious need for Regan to ultimately triumph. His regular boss, whose presence would have complicated the conspiracy narrative, was also a conspicuous – or is that structural? – absence.

In each case a further tension is the divide between providing genre entertainment and socio-political critique – and further, what form that critique should take. Here the entertainment aspect is foregrounded in a brief interlude between Micheli and Simona, albeit one tempered by a clear sense that this is a matter of business and not love, and a Remy Julienne-staged car chase. There’s also a shoot-out, and a couple of punch-ups where the blows have that exaggerated, conventional car-door-slamming sound.

The critique is, as might be expected, more muddled.

But then that could be said to be a reflection of a perceived situation where no-one had the answers?

But that could then be said to be a reflection of a perceived situation where no-one had the answers?

The final shot of the film, noted by an IMDB reviewer, is curious in this regard. On one layer, it appears to be a freeze-frame. Clearly, however, it is in fact an optical printing, since on the other layer, there is the motion of a swinging telephone receiver. The two images, previously united, have become fragmented.

On the subject of fragments, parts of Riz Ortolani’s score are reminiscent of cues for Cannibal Holocaust – the discordant strings, but minus the synthesiser bleeps – and Don’t Torture a Duckling – the powerful percussion, but minus Ornella Vanonni’s vocals, that accompany Maciara's death scene.
Posted by K H Brown at 14:39 2 comments:

When businessman Mac Brown is assassinated on a busy New York street, there is only one man to head the investigation: Frank Berin. For the previous year Berin had conducted extensive inquiries into Berin’s business dealings, but had been unable to find incontrovertible evidence of any criminal activity or conspiracy. Unfortunately for Berin, Brown’s daughter Monica has put up a $250,000 reward for information on her father’s killer(s). Worse still, the killers always seem to be one step ahead of him...

Colpo Rovente is stylishly directed by co-writer Piero Zuffi, with some particularly good use of mirror shots and of (then) high-technology to heighten the sense of modernist paranoia.

The film also benefits from smart deployment of New York and other US locations, along with clever opportunism in some found moments of spectacle, with Berin’s visiting Acapulco to follow up a lead inevitably occurring during the Day of the Dead celebrations.

The production design, in what Tim Lucas has characterised as the Continental Op style, nicely captures the contrasting milieus of their inhabitants – the psychedelic hippie happenings; the criminal boardroom; the laboratory replete with vials of brightly coloured liquids; the Greenwich Village gay bar. Pierro Piccioni’s bold, brash crime-jazz score propels the action along, as does the sharp editing by the incomparable Franco Arcalli.

In sum, even though the source of the fan-subbed AVI is cropped, with some familiar names in the credits being somewhat chopped-off, the film still looks good enough to convince that a digital restoration of the original materials would be justified. The main downside is that the narrative can be difficult to follow at times, perhaps most notably when Berin goes undercover and infiltrates a Hells Angels-type biker gang; aficionados of filone cinema will recognise Ugo Fangareggi among their number. There is a justification for this confusion, however, with the denouement also encouraging the viewer to retrospectively re-evaluate a couple of scenes and some key exchanges within them. It is the first of these, incidentally, that seems to provide further explanation for the Red Hot Shot title. 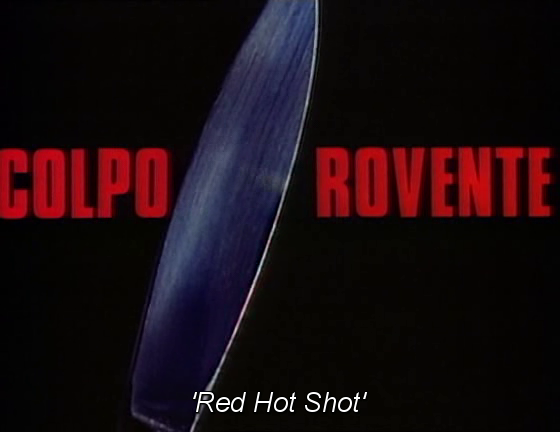 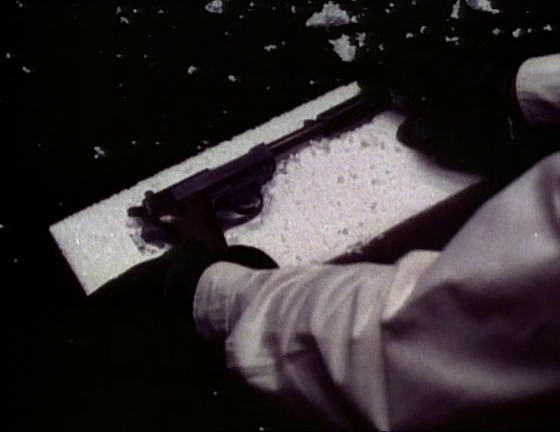 Black gloves and a gun... 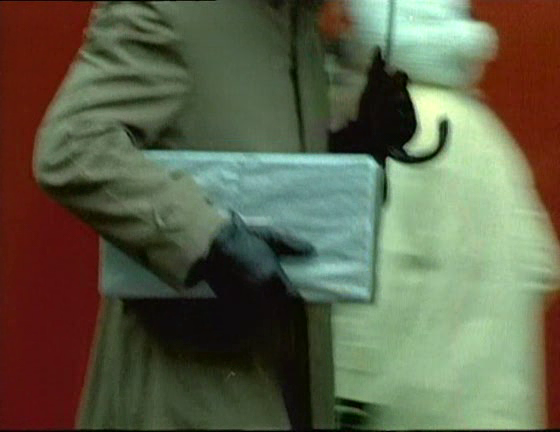 There's a very good reason for the framing of this shot. 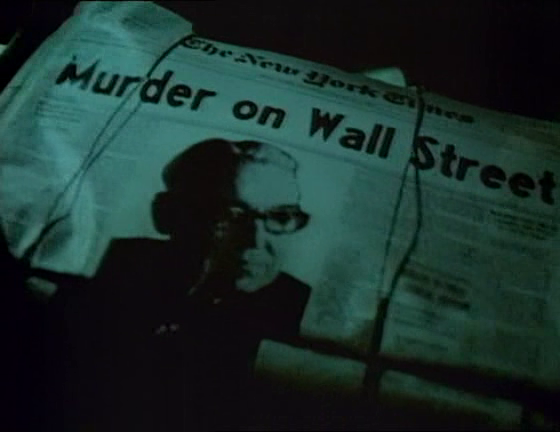 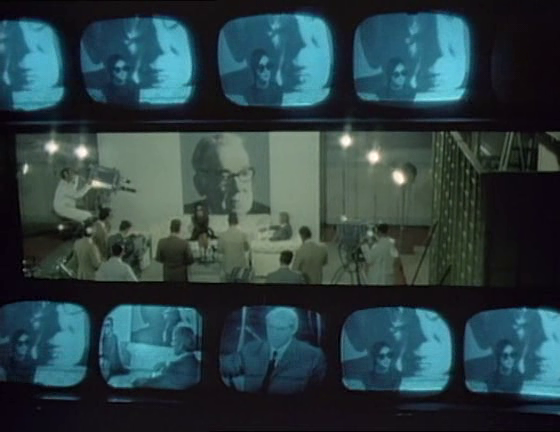 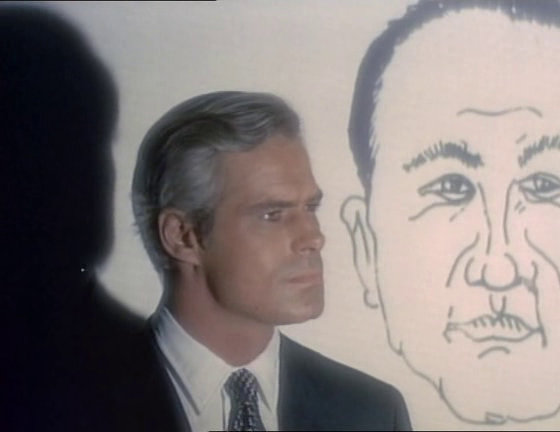 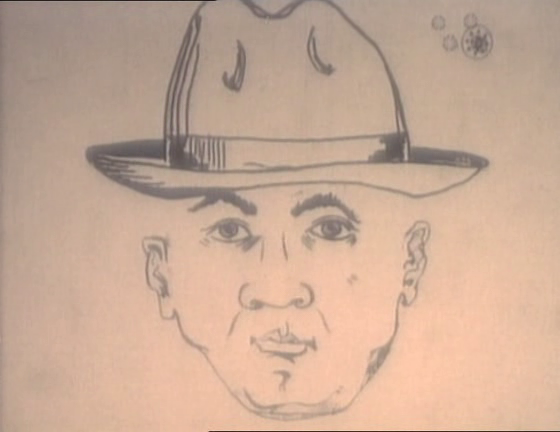 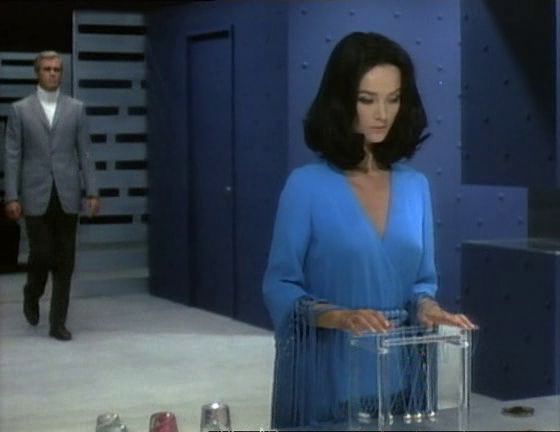 Barbara Bouchet in her fancy penthouse

More a crime drama than a giallo perhaps, the film might be viewed as an alternate configuration of Elio Petri’s Investigation of a Citizen Above Suspicion. There we know that the titular investigator, the right-wing police chief, is also the his mistress’s killer. By being so obvious about it his culpability, however, he effectively conceals it. Here we don’t know that Berin set events in motion by assassinating Brown. When we learn this we might reconsider the identity parade and photo-fit session, where Berin uses himself as one of the reference points for the portrait of the murderer. Likewise, his brutality against a Bud Spencer lookalike festooned with bad tattoos, comes to make more sense.

Against this, though, we can also see that Berin has been responsible for the deaths of some innocents – if, that is, the world depicted is one where any innocents still exist, as certainly suggested the film’s conflation of business and crime, along with the closing scene of hippies over which are projected images from the film itself and culled from the news. This would also tie in with the importance of drugs to the narrative, even if the effects of LSD and heroin sometimes seem conflated.

All-told, gripping, stylish and provocative. And the always-welcome Barbara Bouchet. And, for those with less mainstream tastes, an appearance by experimental film-maker and all-round renaissance man Carmelo Bene as her reviled husband.
Posted by K H Brown at 13:37 No comments: