http://purplezombiedj.blogspot.com/2011/05/giallo-moods-music-for-murder.html
Posted by K H Brown at 20:12 No comments: 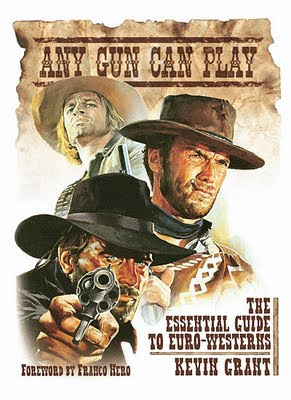 THE EURO-WESTERN BEYOND LEONE

The success of Sergio Leone's 'Dollars' trilogy in the '60s sparked a gold rush, as a legion of European film-makers - many of them sharing the get-rich-quick mentality of Leone's mercenary anti-heroes - followed the master's lead to create some of the wildest Westerns ever made.

Cynical and stylish, bloody and baroque, Euro-westerns replaced straight-shooting sheriffs and courageous cowboys with amoral adventurers, whose murderous methods would shock the heroes of Hollywood Westerns. These films became box-office sensations around the world, and their influence can still be felt today.

Any Gun Can Play puts the phenomenon into perspective, exploring the films' wider reaches, their recurrent themes, characters, quirks and motifs. It examines Euro-westerns in relation to their American ancestors and the mechanics of the Italian popular film industry, and spotlights the unsung actors, directors and other artists who subverted the 'code' of the Western and dragged it into the modern age.

Based on years of research backed up by interviews with many of the genre's leading lights, including actors Franco Nero, Giuliano Gemma and Gianni Garko, writer Sergio Donati, and directors Sergio Sollima and Giuliano Carnimeo, Any Gun Can Play will satisfy both connoisseurs and the curious.

Complete with a foreword by Euro-Western legend Franco Nero, this stunningly illustrated reference guide takes aim at the lingering notion that the genre has little to offer beyond the 'Dollars' films and a fistful of others, exposing the full, vibrant history of the Euro-western.

FOREWORD
By Euro-western legend Franco Nero, star of Django, A Professional Gun and Keoma, among others.

INTRODUCTION
An overview of Euro-westerns, their origins and characteristics, plus the major professionals whose careers they launched, prolonged or transformed.

TARGET PRACTICE
Early Euro-westerns were hit-and-miss affairs, but A Fistful of Dollars is not the only film from the genre's formative period worthy of recognition.

A BULLET SPENT, A DOLLAR EARNED
In the wake of For a Few Dollars More, the genre matured and broadened its horizons, presenting a misanthropic world-view, leavened with irony, that perfectly matched the tenor of the times.

RELATIVES AND RELIGION
Many Italian Westerns skewed their stories towards the home market, serving up stereotypical stories of troublesome females, feuding families and a satirical or critical treatment of religion.

'GOD FORGIVES... I DON'T!'
Euro-westerns posit a world where betrayal is rife and violence ever-present, taking the theme of revenge to extraordinary extremes.

'DON'T BUY BREAD, BUY DYNAMITE'
Euro-westerns were unashamedly populist, and many of them adopted a left-wing stance in the late Sixties, reflecting the influence of radical film-makers and the political atmosphere of the times.

BEWARE OF FAKE GUNS
While American Westerns had Jesse James, Wyatt Earp and Billy the Kid, European film-makers invented a pantheon of their own, populated by the likes of Django, Ringo, Sabata, Sartana and Trinity.

COWBOYS, COMEDIANS AND KUNG FU STARS
Many Euro-westerns were hybrids not just of cultural traditions and film-making styles, but also tones, subjects and settings, with elements such as mystery, comedy, horror and martial arts not uncommon.

DESOLATION AND DECONSTRUCTION
The genre burned brightly but briefly, and by the early Seventies it was in decline. This chapter examines what these latecomers have to offer, and whether they have been dismissed too lightly.

WHO'S WHO IN EURO-WESTERNS
A biographical A-Z of the most important and prolific actors, directors, composers, etc.

[Sounds like a good, comprehensive guide for the most part IMO]

A film podcast by some friends of ours ;-)

Well, one of two: an original prop from Fulci's City of the Living Dead, currently on Ebay. 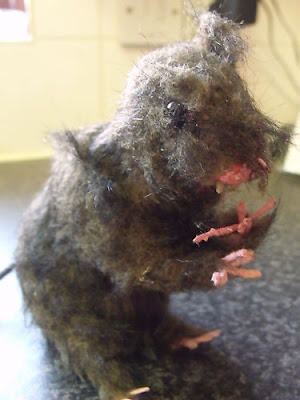 Something for the Fulci fan who has everything?!
Posted by K H Brown at 00:43 1 comment:

Email ThisBlogThis!Share to TwitterShare to FacebookShare to Pinterest
Labels: fulci

The Best of Spaghetti Westerns 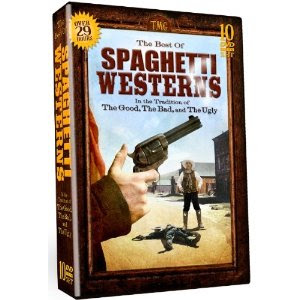 This ten disc set features 20 films, two to a disc:

No Room to Die
Lone and Angry Man

Rope and the Colt
In the Colt's Shadow

A Bullet for a Stranger
10,000 Dollars for a Massacre

A Pistol for Ringo
The Return of Ringo

Ringo: Face of Vengeance
Blood for a Silver Dollar

Not bad for £15 or so from Amazon marketplace.

I've got Seven Dollars on the Red on at the moment and it looks damn good, in the proper aspect ratio, with vibrant colours, a pretty immaculate print and with no artefacting or pixelation thus far. Hope the other films are equally impressive...
Posted by K H Brown at 12:59 4 comments:

US one-sheet for Lizard in a Woman's Skin, as Schizoid 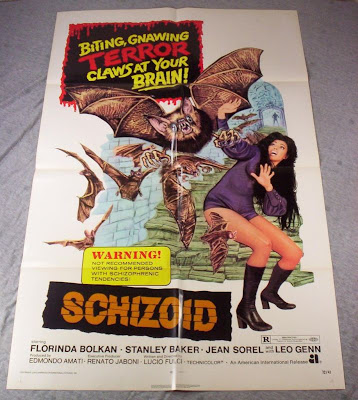 US one-sheet for Psychomania, as The Death Wheelers 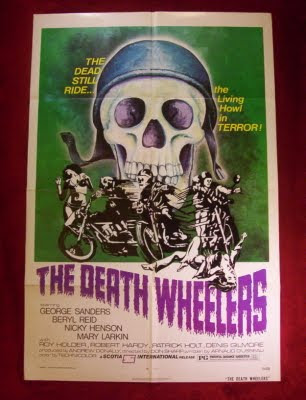 US one-sheet for Death Line, as Raw Meat 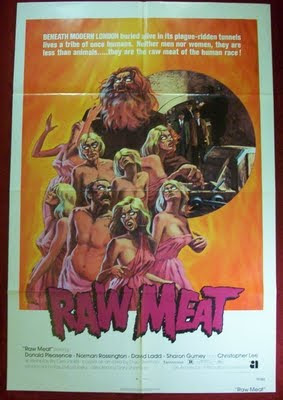