Argento Dracula - to 3D or not to 3D, that is the question

As you are probably aware, a 3D version of Dracula directed by Argento is due to come out soon The teaser footage that has been released predictably shows some "comin' at ya'" type images -- Dracula throws a sword at someone and it pins them to a door, following which there is a cut to the other side showing how far the blade has penetrated the wood, or instance.

Where I think the film will stand or fall as a 3D experience is in how well Argento manages to incorporate and integrate the more subtle kind layered images that have long been a staple of his 2D productions -- the endemic curtains and screens, the shattering glass, or the killer standing immediately behind his victim at the end of Tenebre. It would also be interesting/weird seeing some of those prominent mirror-based compositions in Deep Red and Suspiria with 3D except the flat mirror image...
Posted by K H Brown at 04:52 No comments:

Some random 4.30 AM Jesus Franco questions

What are your favourite and least favourite periods of Franco's films? And why? Do you find that there are individual films within them that you like and don't like / like less? Is it just an all-encompassing Francoverse where the more you watch, the more you see the connections, perhaps a bit like Frank Zappa's xenochrony and conceptual continuity in his music?
Posted by K H Brown at 04:28 5 comments:

Framing in Argento -- fragment of a Deleuzean reading

Like Leone, Argento used 2.35:1 widescreen Techniscope until commercial considerations of television and video sales encouraged use of the 1.85 ratio on Inferno and Tenebre. While Argento's compositions perhaps do not draw attention to the shape of the 2.35:1 frame as often as Leone does, the effect on those occasions where he does so is thereby arguably heightened. In Leone's films the use of the all areas of the frame, the out of field/frame and quasi-split screen effects generally does not serve any obvious purpose beyond making the conventions of classical cinema evident. In contrast the likes of the widescreen composition in Deep Red when Marc, on the far left, and Carlo, on the far right, shout to one another across a space dominated by the central statuary, also have a pedagogical role. For in conjunction with Carlo's remarks on the distinction between what Marc thought he saw and what he actually saw this image draws attention to Marc's reading of the image of Carlo's mother in the bottom left of the frame as a face in the painting she was reflected into. This image also establishes a crystal-image circuit between the actual - Carlo's mother - and the virtual - Carlo's mother as mirrored into the painting that confuses Marc.
Posted by K H Brown at 04:08 1 comment:

Two Polish posters for Fulci films; see if you can guess which: 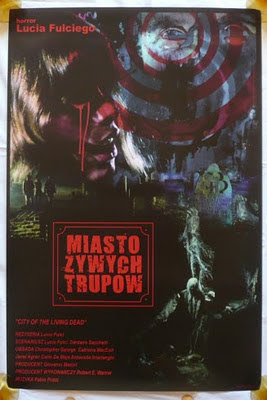 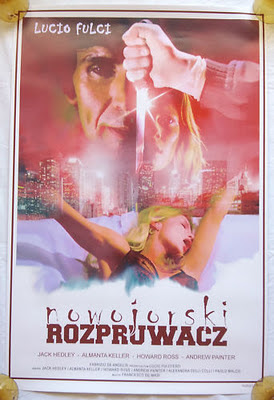 And a Shark vs Zombie garage kit: 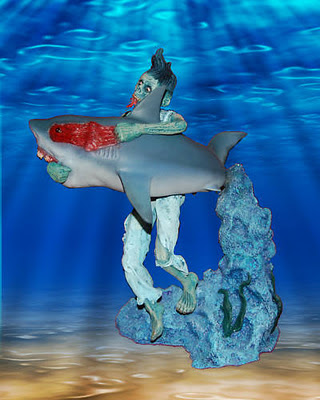 Matt Blake, who runs the excellent Wild Eye website and wrote the essential Eurospy Guide a few years back has recently published this book on Italian fumetti neri style films of the 1960s and 1970s. 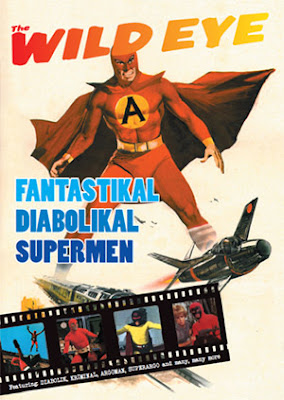 Extensively illustrated with posters, lobby cards and stills from the films and featuring quite a lot of interview and review material that hasn't been previously available in English (at least to my knowledge) it's an essential purchase for anyone with an interest in this comparatively under-explored area of Italian cult cinema.

Taking a comprehensive but not all encompassing approach, Blake looks at films that were made by Italian directors – so no Modesty Blaise or Mr Freedom – and which either presented direct adaptations of fumetti characters (Diabolik, Kriminal, Satanik, Isabella, Valentina etc.) or were clearly influenced by the comics (The 3 Supermen series, Vittorio De Sica's contribution to the anthology film The Witches, the Johnny Dorelli vehicle How to Kill 400 Duponts and so on).

The films are discussed in chronological rather than alphabetical order, allowing the reader to better chart the development of the filone as a whole and particular series within it. This is especially helpful when it comes to the likes of the long-running 3 Supermen series, since the personnel involved often changed from one film to the next, for better or worse.

Thankfully there's also a comprehensive index of titles for those wondering whether a specific film is one of the better, worse or average examples of the form.

While the reader will inevitably disagree with some of Blake's evaluations of the films, his reviews are invariably intelligent, informative and insightful, indicating why he rates or does not rate a given film, filmmaker or performer.

So, for example, of the 3 Superman films, Blake identifies those directed by Sabata's Gianfranco Parolini as ranking above those by Black Emanuelle's Bitto Albertini, with both in turn preferable to those directed by their usual producer and writer Italo Martinenghi – precisely the kind of stuff you need when, like me, you've got a whole load of them in your virtual to-watch pile and were not sure of where to begin.

Page for Fantastikal Diabolikal Supermen on The Wild Eye.
Posted by K H Brown at 01:52 2 comments:

I got these a while back and my friend painted them up for me: 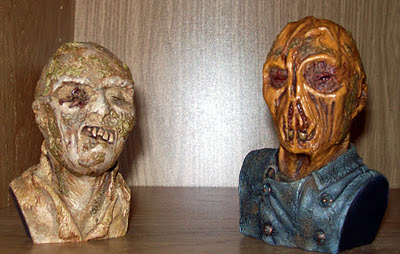 They're from Gargoyle Creations, who also do Living Dead at Manchester Morgue and Zombie Holocaust ones.
Posted by K H Brown at 00:56 2 comments:

A duo from from Montréal who've just released their first EP, Giallo, as a digital download.

As they explain: “We created this music with a mixture of our inspirations, that is horror and sci-fi film music, eighties cartoons music, rock, new wave, etc.... There is no label, no distribution company, we are totally independant and this EP album makes us really proud.”

Check it out at:

http://deadlyblvd.bandcamp.com/
http://www.facebook.com/DeadlyBLVD
Posted by K H Brown at 00:49 No comments: