Thoughts upon an essay/paper title

Written with the catchy/punning bit, then the colon, then what it's really about.

The Sound of Violence: Audio/Visual combination and disjunction in Dario Argento's Films
Posted by K H Brown at 00:05 No comments:

For the Edgar Wallace krimi The Hexer:

Note the identification of the film as a giallo and the use of the colour yellow to strengthen this association.

Also note the retitling of the film as a body count movie: Five Victims for the Killer. This contrasts with the more literal translations used in most other territories, as The Sorceror or The Wizard.

The obvious reference point here is, of course, Six Women for the Killer, better known as Blood and Black Lace.

We begin with Bob and Sally, who are engaged to be married, going to their doctor. He reveals two shocking facts: Bob was previously treated for VD. Sally had previously been pregnant. These revelations lead to accusations and recriminations from the couple. Fortunately the doctor is able to make them see sense through showing two educational newsreels.

Bob’s is about syphilis and gonorrhoea, identifying the symptoms of the diseases and their consequences if left unchecked. Meaning we get some documentary shots of diseased genitals, infants born with congenital syphilis and the like. Interestingly this footage is intercut with flashbacks to how Bob became infected, via a prostitute that his friend brought back to their lodgings prior to his leaving for the army.

Sally’s is somewhat tamer and places a greater emphasis upon her own back story: She was with a guy who unwittingly impregnated her before he also leaving for the army, where he was killed in combat.

The surprise coincidence is, of course, that the third party in both narratives is the same person, leading to the couple’s reconciliation.

Following this, which takes around a third of the running time, the subsequent narrative splits into three. First there is more documentary material explaining pregnancy. Then there is a newly recorded colour segment in which David Friedman recites the speech that internationally renowned expert ‘Mr Alexander Leeds’ would give, extolling the audience to buy the ‘invaluable’ yet priced at $1 volumes ‘Father and Son’ and ‘Mother and Daughter’. Friedman performed this task in real life while working with established exploitationeers of the time.

Finally there is birth of a baby footage, both normal and caesarean.

Throughout there’s an emphasis upon voice-over rather than synchronised sound. This was obviously due to economics, as also evinced by the straightforward, no-nonsense approach taken by the filmmakers.

Away from its shockumentary value Because of Eve is worth looking at for what it inadvertently says about US society at the time: In addressing where to get treatment for VD two alternatives are identified: The regular doctor, if one can afford this, or a public health clinic. There is no commentary or critique on this dichotomy. In a similar manner the discussion of illegitimacy seems to endorse carrying the foetus to term and then having the infant adopted, largely avoiding discussion of contraception and abortion. This was perhaps why the Catholic Legion of Decency did not condemn the film, as might have been expected.

One important aspect of Harry Grey's The Hoods, the inspiration for Leone's Once Upon a Time in America, is how fact and fiction merge within it. Given this, it was interesting to read a description of how two real-life gangsters, Lepke and Shapiro, met and elements of similarity with Noodles and Max in Leone's film; in Grey's book the two are already friends, whereas in Leone's film they are rivals when they first meet:

"Lepke took to stealing pushcarts, and one day, he tried to rob a pushcart that was already being robbed by another street tough named Jacob “Gurrah” Shapiro. The two became fast friends, and started a relationship that would last the rest of their natural lives.

Lepke and Shapiro teamed up, and became a menace to the downtown pushcart owners. They
tried to climb the ladder to bigger scores, but in 1918, Lepke was caught robbing a downtown loft, and as a result, he was sent to Sing Sing Prison for a five-year stretch.

Lepke's time in prison was the equivalent to a college education for criminals. When Lepke, at the age of 25, was released in 1923, he was now a hardened thug, with the knowledge to make it big in a life of crime.  Lepke teamed up again with his old pal Shapiro, and they decided they could make a mint selling “protection,” to bakeries all throughout New York City." -- Joe Bruno Mobsters, Gangs and Other Creeps

Email ThisBlogThis!Share to TwitterShare to FacebookShare to Pinterest
Labels: Once Upon a Time in America, Sergio Leone

One of my favourite film studies academics, Paul Willemen, has died. While I never met him, I did work briefly with his wife and discussed Jesus Franco with her; Paul was one of the few film academics to admit to a liking for bad cinema:

"I get many cinephiliac pleasures not only from some of the recognised masters but also from watching the films of Terence Fisher, Koji Wakamatsu, Jose Mojica Marins, 1950s and 60 German Edgar Wallace and Mabuse films or even downright sleaze movies like those of Jesus Franco" - Looks and Frictions, p. 256
Posted by K H Brown at 14:31 No comments:

http://thedukestworkshop.bandcamp.com/
Posted by K H Brown at 00:28 No comments:

Saw this on Antonella Fulci's facebook page a couple of days ago: A Lucio Fulci bobblehead. 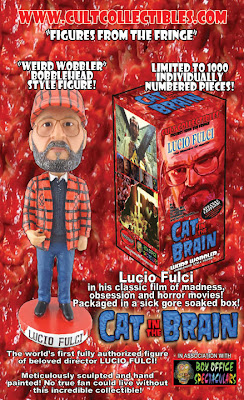 Available from Cult Collectibles, who also do a Jill from The Beyond with alternate normal and shot heads, and various others for Rudy Ray Moore's Dolemite and the original Black Devil Doll.

Unfortunately they're only available in the US, so think I will have to get my sister to get one and post it on / bring it over next time she visits ;-)
Posted by K H Brown at 16:44 No comments: