One of the more curious giallo-related items I have is a CD entitled Murder for Pleasure: giallo & thriller original soundtrack themes, which I picked up through an Ebay auction a few years back. The CD, which has a nice yellow giallo paperback styled cover using an image from one of the What Have You Done to Solange posters, is credited to Gatto nero records, Rome, and copyrighted 1997. 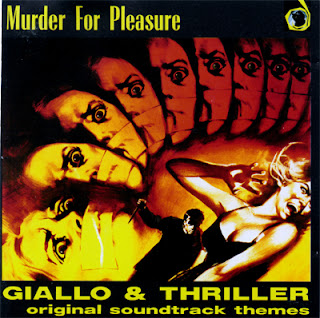 Most curiously, however, it is marked as being "not for sale" and "promotional use only"; with the 28 tracks featured appearing to have been lifted direct from the films themselves, coming with snatches of dialogue and sound effects (gunshots, screams etc.) and suffering from considerable noise and distortion at times.

One can only assume that it was someone's pet project. But who? No-one is credited on the disc, no further releases ever seem to have came from the label, and internet searches reveal nothing further. As a further measure of the disc's obscurity when I queried it on CDDB I got either nothing or, bizarrely, disc 2 of Méér Dan Het Beste Van Elvis Presley 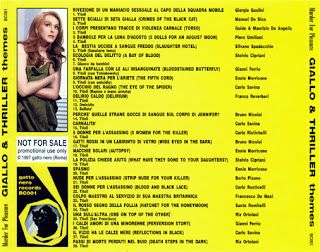 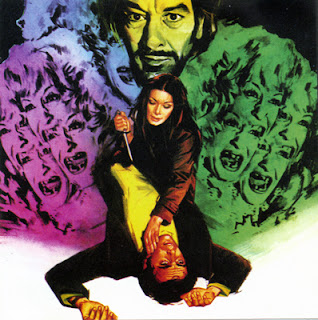 A decade on, meanwhile, heightened awareness of the giallo and an extensive programme of soundtrack reissues from the likes of Digitmovies, Beat and Easy Tempo mean that better versions of almost all the material featured therein are now available.

So as a vaguely seasonal gift for those who want to hear the originals or the odd track like those from Renato Polselli's Delirium that is still unavailable in an official relase (at least to the best of my knowledge) here is a download. If you are the original rights holder and object please let me know and I'll take the link down.

Tracks are at 192 kbps; scans of cover art are included. The total size is about 85MB.

Dear Keith, this has to be this year's best online Xmas present. Thank you very much for this (there are still a few rarities in there, even though some of these tracks have since been re-released).

I take this opportunity to announce that I'm desperately searching for Gianni Ferrio's extraordinary soundtrack for 'Puzzle' (L'uomo senza memoria), who seems nowhere to be found.

In case someone has this...

Glad you're enjoying it guys!

How much for a copy?

Been loking for this for years.

Jimmie - are you DJ Speedy, who did the Electro Euro Trash and All the Colors of the Dark mixes a few years back?

If so, mail me your postal address and I'll happily burn and send you a copy of the CD; unfortunately I don't know where you might buy an original though.

Many, MANY thanks for this one KH! It is indeed a terrific holiday gift. I`ve been wanting to get this for ages, and even though I have a lot of the tracks now, there`s still some rarities and it`s wonderful to hear the whole thing in its original form.

This blog is a daily treat, always something of interest.

If you still need a copy of DEATH OCCURRED LAST NIGHT(the film), drop me a pm thru der Maniacs.

Hello Keith,
Just won this CD online, again, EBAY - my question is, was there no booklet supplied, just a front and rear cover with contents, thank you, Simon in Canada

The CD I have only has four pages of covers - the front and back covers (What Have You Done to Solange / All the Colours of the Dark) and the inside fold out (Torso / Bay of Blood). I don't think there's anything else, - there's no staples or staple marks, for instance - though if someone else knows different pleasure let us all know!

Sadly the link's gone. Is there any chance of a re-up? Tanx in advance.

please gonnae reload this one!

You can get a torrent of it from Cinemageddon:

Cinemageddon is closed for non (and new) members. Could you put it on Piratebay or some other open torrent site, Mr. Brown? It would be the brotherly thing to do.

would be really happy for a repost.

I compiled Murder for Pleasure while working for the dreaded Media Publications... quality is pretty iffy at times but it was a labour of love and at the time many of these tunes weren't available elsewhere!