The Giallo Scrapbook - or, more stuff for you to buy... 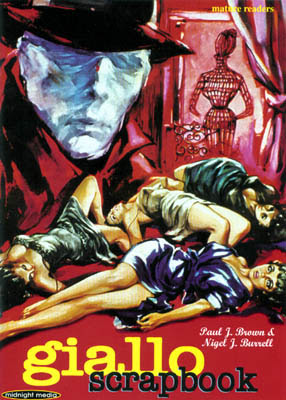 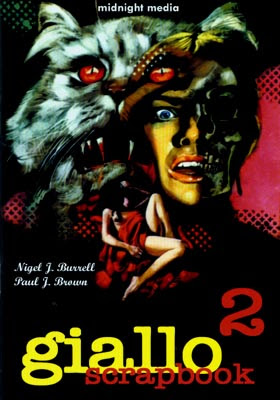 These two A5 booklets are from Nigel Burrell and Paul Brown at Midnight Media, the guys behind the excellent Is it Uncut? magazine. More consumer guides than theoretical discussions - and thus nicely counterpointing Mikel Koven's La Dolce Morte - they survey a total of 80 gialli.

The first volume includes the more easily accessible examples of the form, while the second pushes the boat out a bit further to include several not-on-DVD-but-damn-well-should-be titles like Footprints and Four Flies on Grey Velvet along with a number of largely 80s, 90s and 00s vintage entries such as Nightmare Beach and Body Puzzle that I've never had the inclination to track down. (Of the 40 titles in volume one, my current count is 39, whereas I've only seen 29 of the 40 in volume 2; though knowing that Luigi Bazzoni's La Donna del lago or Dino Tavelli's The Embalmer are actually available on DVD should mean that number goes down over the coming weeks. There goes the bank balance...)

A brief synopsis of each film is followed by a commentary / critique, cast / credits and DVD availability, all written in a breezy, easy-to-read style with a careful avoidance of spoilers by Burrell, and nicely laid out by Brown with plenty of stills, DVD covers and posters to enliven things.

While the reader will inevitably disagree with some of what Burrell says - The Stendhal Syndrome is pretty much a masterpiece in my book, for example - there is a consistency to his opinions that should enable anyone with even a passing interest in the genre to quickly work out whether any given unfamiliar gialli is likely to be worth the time and money as far as he or she is concerned.
Posted by K H Brown at 15:57

Great books! Infact, Midnight have produced nothing but amazing books and magazines for genre fans!

By the way, I love your site!!
Giallo is my favorite "genre".
Keep up the amazing work!

I love these books from Midnight Media they are great reference material and have some great covers and locandina!