Scanning the credits of many Italian films of the 1970s you are likely to see the name Carla Mancini C.S.C crop up. According to her IMDB entry she appeared in 191 films between 1970 and 77, with no fewer than 51 in 1972 alone.

Yet just try actually identifying who she is, putting a face to the name and initials. It is very difficult, precisely because often as not she is a face in the crowd, or likely appeared in scenes that ended up on the cutting room floor or were never even shot in the first instance.

The key to this lies in those three letters C.S.C. For at the time Italian films were supposed to employ a certain number of centro sperimentale cinematografia graduates and got financial breaks for they did so. If Mancini's credits are anything to go by, it must have been a nice little earner to be in on... 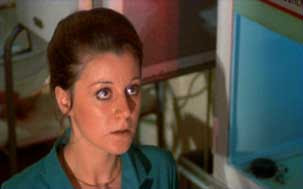 Carla Mancini C.S.C in The Perfume of the Woman in Black, apparently...
Posted by K H Brown at 22:16