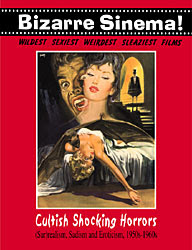 Another Bizarre Sinema series book, Cultish Shocking Horrors: (Sur)realism, Sadism and Eroticism, 1950s-1960s, arrived today. Again, comparatively expensive but once more worth every penny, being profusely illustrated and full of information that isn't really available elsewhere, as when you have someone like Jean-Pierre Bouyxou reminiscing on seeing these films on the Midi-Minuit-Fantastique circuit at the time of their first release.

For the English-language reader the book makes an especially nice companion piece to Cathal Tohill and Pete Tombs's Immoral Tales, in that it covers some of the same films – Horror of Spider Island, Mill of the Stone Women and The Awful Dr Orloff – in greater detail and, more importantly, from a different perspective, that of the continental European.

This enables the volume's authors to respond to British films like Blood of the Vampire, Horrors of the Black Museum and Peeping Tom by situating them as part of the same international quasi-movement rather than as aberrations from the Hammer Gothic formula, and – perhaps most interestingly – discuss some little-known Mexican horrors such as El Monstuo Resuscitado.

I'm very tempted to buy the 'Psychopathia Sexualis in Italian Sinema'book by Glittering Images soon,have you seen this yet?
Also can i ask where you bought 'Cultish Shocking Horrors'?

I posted about the Psychopathia Sexualis book here. It's a thinner, paperback book, but is only in English and Italian, rather than English, Italian and French. I got it and La Dolce Paura a couple of weeks ago; there's a third volume, Esotika, Erotika, Psicotika which looks like it covers more 1970s territory as well.

I got the Cultish Shocking Horrors book through Ebay.

Thank you,will be ordering some of these very soon.
Thanks for the locandine comment,i'm going to try and do a better job with the pictures soon and add more of my collection.