The latest additions to my library 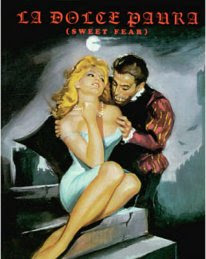 These glossy, large-size, dual-language (English / Italian) coffee-table type books, published by Florence-based Glittering Images, are expensive, but well worth it, with hundreds of beautiful illustrations, black and white and colour, and the kind of information on their subject matter that it is difficult to find elsewhere - never mind the title of the first Italian translation of Robert Bloch's Psycho, here is its cover illustration.

The first volume, La Dolce paura, takes its title from a Gothic sequence in Fellini's celebrated La Dolce Vita, and explores the interrelationships between sexy horror films and fotoromanzi in the period 1959-66, when Malia featured photo-novel versions of films like Il Monsto di Venezia / The Monster of Venice and Il Boia scarlatto /Bloody Pit of Horror and the occasional story from KKK – fortunately it has nothing to do with the white sheet guys, instead bearing the subtitle "i classici dell' orrore" – such as the pseudonymous Frank Bog(h)art's La Vergine di Norimberga / The Virgin of Nuremberg was adapted for the screen.

With 1967 mysteriously missing, Psychopathia Sexualis in Italian Sinema picks up the story from 1968-1972, but opts for a more focussed approach. Inspired by Richard Kraft Ebbing's work, it presents ten “case studies” drawn from the films and their fotoromanzi renditions, including Femina ridens / The Frightened Woman, with Dagmar Lassander being menaced by Philippe Leroy; La Verita secondo satana and Delirio Caldo / Delirium, with the authors having a particular enthusiasm for director Renato Polselli and his fetish star Rita Calderoni.

What is maybe missing is much on the fumetti beyond a few pages at the end of La Dolce paura referencing Kriminal and Satanik. I suspect that the third volume in the series, Esotika, Erotika, Psicotika, has more to say on the subject, and probably also looks at the later, more out there 1970s examples of the form.

Perhaps my favourite nugget of information is that number 144 of KKK, written by one Patty North, was titled Il gatto a 9 code like a certain Dario Argento film...
Posted by K H Brown at 18:05