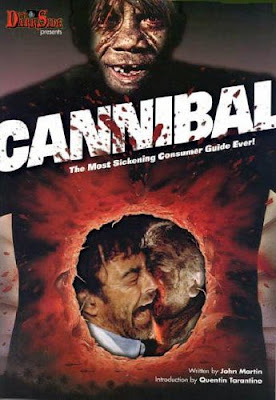 Back in the 1980s and 1990s, John Martin was arguably one of the best genre writers around. The likes of The Seduction of the Gullible, his examination of the British “video nasties” phenomenon, and Giallo Pages, his guide to exploitation all'italiana, occupy a significant place in my bookshelf. So when I saw that he was doing a book on cannibal films, it was very much a must-get, without waiting for reviews or opinions to filter through.

I wish I had, however, for the book unfortunately suffers from what looks like a paucity of new material, with a lot that is either definitely reprinted – the interviews that make up the second main section of the book – or that looks like it might well have been, as when a discussion of the 1966 film Africa Addio comments its representations of apartheid and internecine conflicts in Rwanda from a perspective of 30 rather than 40 years distance.

Following a introduction from Quentin Tarantino, an old acquaintance of Martin's who once talked Italian trash cinema with him in Giallo Pages, suggesting that the idea of doing The Inglorious Bastards has been in his head for a long time, Martin gets down to business with the history of the cannibal film.

He starts, quite rightly, in mondo films like the aforementioned Africa Addio, before charting the seminal contributions of Umberto Lenzi and Ruggero Deodato; various one-offs from other directors; the crossover between the cannibal and the zombie film, and the eventual decline of the filone into the later 1980s and early 1990s.

Unfortunately Martin never really defines his subject matter or scope, also discussing what I would argue are straight zombie films where the flesh eating is – to draw on a distinction implied in Dawn of the Dead's “Are these cannibals?” “The answer is no” exchange – inter- rather than intra-species.

Consequently, his selection of films at times feels like something of a grab-bag of favourites - as perhaps signalled by the composite cover, which grafts a Deodato-style cannibal head onto that shotgunned torso from Margherti's Cannibal Apocalypse and fills in the hole with a Zombie scene from Fulci's film of the same name.

The point of comparison here is Martin's old rival Jay Slater's Eaten Alive, which endeavoured to be an encyclopaedic guide to Italian cannibal and zombie films and thereby included not only the likes of Pier-Paolo Pasolini's Porcile but also Joe D'Amato's Papaya dei Caraibi.

While definitions here are always going to be problematic when you have films like Cannibal Apocalypse, where cannibals behave not unlike zombies, and Zombie Holocaust, where both cannibals and zombies are featured, and although Slater's own attempted definition led to some boundary cases of its own – is Mario Bava's Planet of the Vampires a zombie film? - the point is that they would probably have helped.

The second half of the book turns to interviews with John Morghen, Joe D'Amato, Fabrizio de Angelis, Ruggero Deodato, Lucio Fulci, Umberto Lenzi, Antonio Margheriti and Sergio Martino. That D'Amato, Fulci and Margheriti are no longer with us tells you something of their vintage, but given the moribund state of the Italian industry it is debatable whether a more recent interview with a Deodato or Martino would really have added much new material.

A profile of Giannetto de Rossi rounds things off, but unfortunately also comes across as somewhat pointless because, after endeavouring to trace the apparent pseudonyms of Giannetto and establish that Gino de Rossi is one of them, a concluding paragraph notes how the Blue Underground 25th anniversary DVD of Zombie provided photographic evidence that Gino exists in his own right, thereby making the exercise seem a somewhat pointless one.

The book is profusely illustrated throughout with posters, stills, lobby cards, DVD and video artwork and so on, although the occasional image has the look of a second-hand scan rather than being from an original.

Overall, if you've never read FAB Press's director's series volumes on Ruggero Deodato and Lucio Fulci, don't have Eaten Alive or – especially– old issues of Giallo Pages, then Cannibal might, despite all the above criticisms, be a worthwhile addition to your bookshelf. But if you do, then there isn't much new here to really justify the price.
Posted by K H Brown at 12:50

I have that issue of Giallo Pages with the Tarantino interview and Quentin certainly knows his stuff,this guy is a BIG fan of Italian genre cinema.In it he reels off lists of his favorite movies by Fulci,di Leo,Castellari etc,a great read.It's a shame John Martin stopped this great fanzine.

As you say, it's a shame Giallo Pages stopped, though with that infamous Special Issue editorial there I suspect there were a lot of bridges burnt.

I was actually thinking about Tarantino when watching Superargo vs Diabolicus as well, specifically whether he had taken Mexican masked wrestling superheroes into account when formulating the superhero alter-ego riff in Kill Bill vol. 2. The Rodriguez / From Dusk Till Dawn connection might imply he knows of them, but I don't know about their wider culture - I'd guess he'd tend to view them more in the US context of weird trash than the Mexican one of something more embedded.

Yeah he slated a lot of people involved in the UK scene at that time in that editorial.

It's nice to look back at old issues of GP now and then,though i found the last issue(with the Midnight Media type glossy cover and that strange lettering) and Seduction#2 not anyway near as good.