The funeral of Sir Oliver is interrupted by the sound of his corpse laughing. While this understandably makes headlines, Inspector Higgins of Scotland Yard sees no reason for the authorities to get involved until a skull-masked figure starts menacing and murdering the remaining members of the family and their associates. 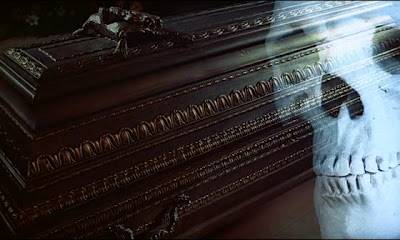 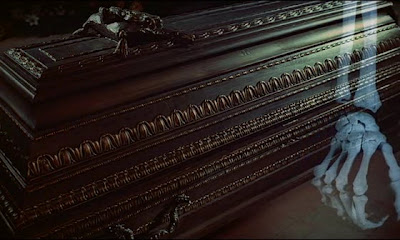 Needless to say there is no shortage of suspects, especially since Sir Oliver’s own death – if indeed he is in fact definitely such – might well be down to foul play... 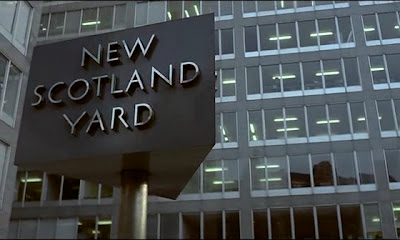 Giallo fans will note a number of apparent similarities with The Case of the Scorpion’s Tail, through the centrality of animal and a plot involving blowing up an air-plane, and The Black Belly of the Tarantula and The Crimes of the Black Cat, through the bizarre murder method employed, the skull-masked killer’s scorpion motif ring having a spike poisoned with a deadly paralysing agent. 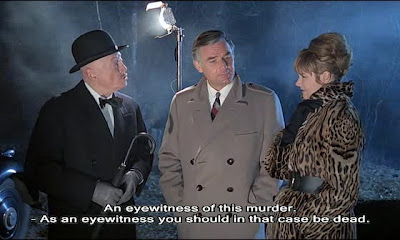 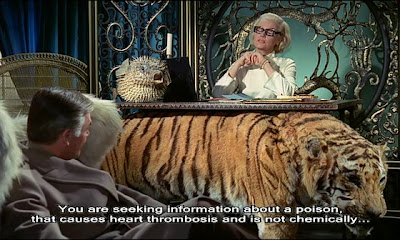 The kind of extravagant, excessive production design that wouldn't be too out of place in Inferno, as Higgins seeks advice from an expert on poisons

Another touch in common with the giallo more generally – Blow Up, The Cat o’ Nine Tails and the aforementioned The Case of the Scorpion’s Tail among others, as well as horror entries like Bloody Pit of Horror – is the importance of a minor detail in a photograph in throwing some light on the mystery.

The sense of being a transitional work is, however, perhaps more immediately apparent in terms of the more overt horror film element compared to earlier krimis. Ultimately, however, the mystery is resolved in favour of natural terror rather than supernatural horror, more The Hound of the Baskervilles than The Plague of the Zombies if we're talking English gothic models, by way of moving further into the realms of the improbable but not ever reaching the far shore of the impossible.

Or, more concretely, whilst the zombie state as a particular form of catatonia in which a still living person looks dead is improbable, the zombie state as that of a dead body returning to life is impossible. Oddly, however, the weirdest idea in the whole film is perhaps that of one of Sir Cecil’s staff has green skin, and being taken for a Creole from the West Indies on account of this. Put it down to a more innocent, less culturally aware and sensitive age...

In terms of the former Hammer film, it’s also worth noting the telling exchange between Higgins and the resident cleric. Higgins suggests something akin to Peter Cushing’s Sherlock Holmes, that both men fight evil in their own way, but the cleric is having none of it, as if to indicate that he is more (giallo) suspect than (Hammer) savant.

There are some nice match edits and other characteristically extravagant touches from Alfred Vohrer and his team – cinematographer Karl Lob, editor Jutta Herring etc. – with the shift to colour also allowing for the use of expressive (or neo-expressionist) red and green lighting effects that would not be out of place in a Bava film, bringing a new element to that otherwise familiar mixture of establishing shots of New Scotland Yard, Piccadilly Circus and red double decker busses combined with obvious, invariably fog-shrouded German exteriors and studio sets. 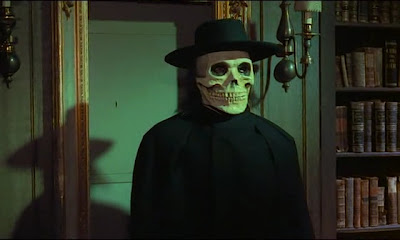 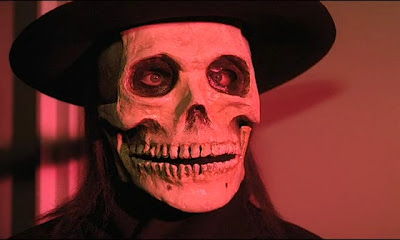 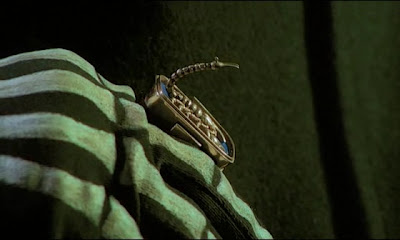 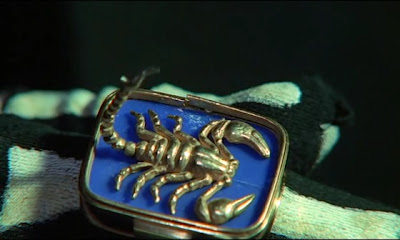 You're going to meet death now, the living dead...

The animated titles are another highlight: a skeleton appears superimposed on Sir Oliver’s coffin and then alternately spits out the titles or grabs them with a bony arm.
Posted by K H Brown at 22:00

god this looks great, where did you get this from?