Dr John Hichcock is not a well man. Confined to a wheelchair by illness, he survives only due to regular injections from his friend and fellow physician Dr Charles Livingstone. What is worse than his physical condition, however, is his mental one. “Just a living corpse,” and increasingly obsessed with a world beyond this one, Hichcock wears himself out in séances and repeatedly makes suicidal gestures.

Finally tiring of Hichcock's antics, Dr Livingstone and Hichcock's younger wife, Margaret, decide that it would be best for all concerned if he be allowed to die: his suffering will be at an end, while they will no longer have to carry on their affair in secret and will doubtless inherit the considerable estate. 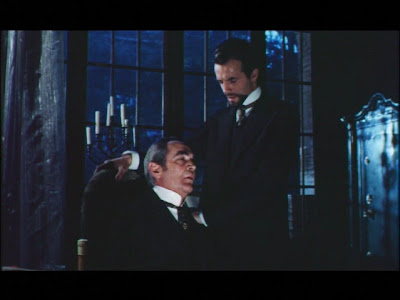 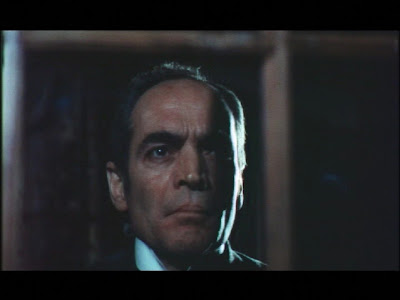 One night Dr Livingstone thus fails to give Hichcock one of the drugs he needs, leading to his death. Hichcock's body is interred in the family tomb, and the will read, which presents Margaret and Charles with a nasty surprise, Hichcock having unexpectedly left the majority of his money to the local orphanage. 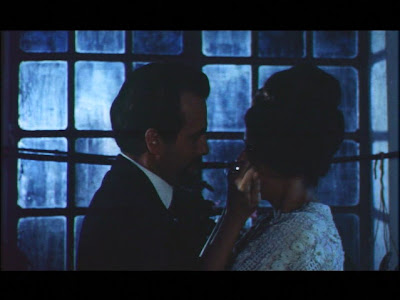 The two lovers in a not-so secret embrace; the blue light is a recurring visual motif

Worse follows, as the key to Hichcock's safe cannot be found. Housekeeper Catherine, who had earlier acted as a medium for Hichcock during the séances and has a habit of creeping onto the scene at inopportune moments, suggests that it must have been buried with him.

While Hichcock's body is in his coffin (and is in fact decaying faster than usual, on account of his treaments) a series of inexplicable apparitions compel Margaret and Charles to consider the possibility that his spirit lives on and is haunting them...

Despite seeing director Riccardo Freda – billed under his customary Robert Hampton name – reuinted with Barbara Steele and Harriet White and again featuring a character by the name of Dr Hichcock, Lo Spettro / The Ghost is a not so much a sequel to The Horrible Secret of Dr Hichcock as a reconfiguration. 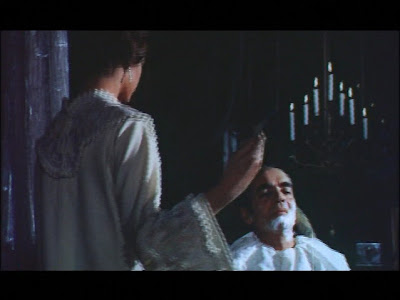 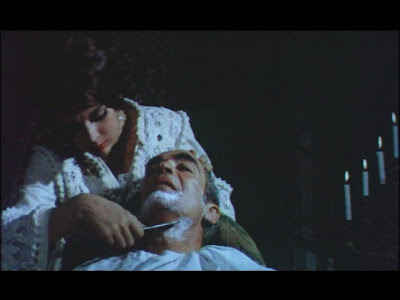 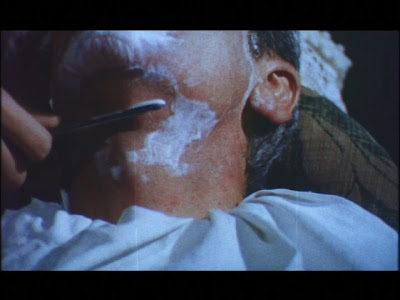 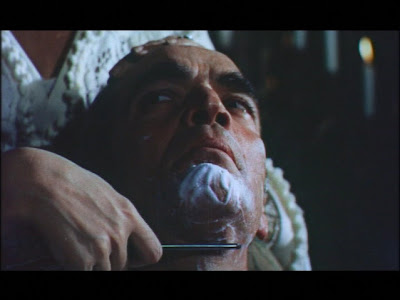 Compare to the barbershop sequence in The Cat o' Nine Tails

With White again playing the sinister housekeeper that was her stock-in-trade, the main difference lies in Steele's role, less the innocent victim than her more usual victim-or-victimiser role. 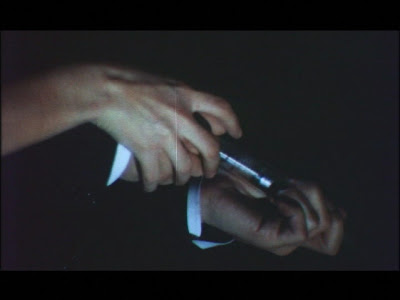 The moment of decision – the two lovers' hands and the syringe

The model in this instance, given the Scottish setting, the recurring motif of bloodstains and references into the dialogue to “what's done cannot be undone” would seem to be Lady MacBeth, with Margaret the one who first takes the initiative and makes the fateful decision, but then finding having the greater difficulty in coming to terms with the deed – as much because she is our main point of identification and the primary target of Hichcock's wrath as anything else. 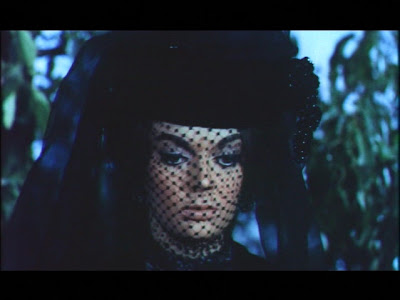 While the visible manifestations of Hichcock – the figure at the window that then slowly advances on Margaret, the drops of blood that lead Livingstone to his hanging form and so on – convince, those in which only his voice is heard are less so. This is not, however, perhaps so much a failing of the filmmakers themselves, each manifestation being suitably uncanny / unheimlich, as a combination of the technological limitations upon them at the time and the phenomenological perspective I tend to take here.

In terms of the former, it is the way in which Hichcock's booming voice seemingly emanating from Catherine's mouth as she seemingly speaks in a trance really needs that 5.1 Dolby mix, even as the inclusion of such would then result in further complications if it in fact turns out that Hitchcock's ghost is not “for real” precisely because of the absence of such technology at the time the film it set. 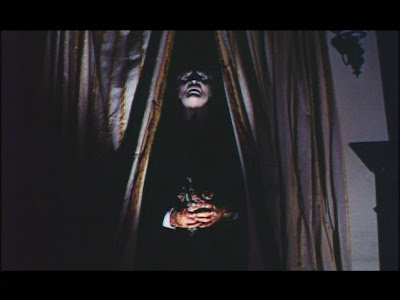 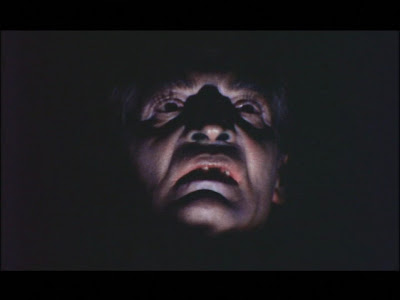 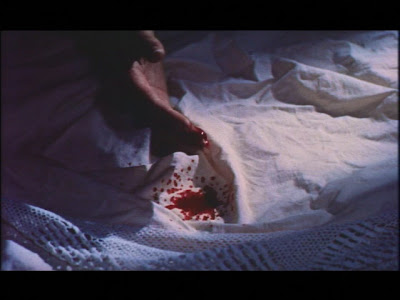 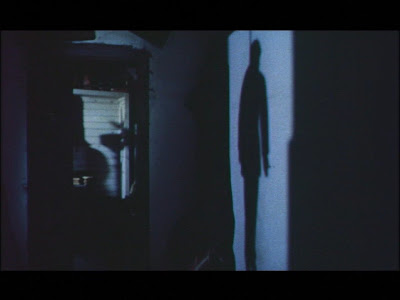 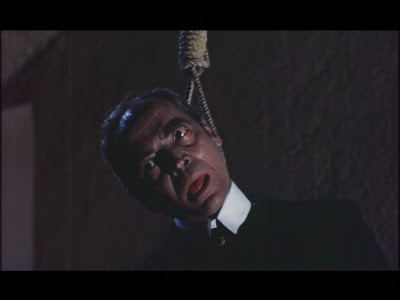 One point of comparison here is Argento's Trauma, with its exposing the machinery by which medium Aura Petrescu invokes the spirits, as a complex, modern machinery of tape recorders and speakers capable of deceiving the ear in a way that wax cyliners and horns perhaps could not.

Then again, the extent to which we experience sound as naturalistic or artificial is also highly contingent, with it certainly within the realms of possibility that the uncanny nature of the acousmatic voice would be enough of a shock to the Victorian or Edwardian hearing it for the first time for other matters not to enter the equation. One also thinks here of the stories of audiences recoiling in terror from the Lumiere's L'Arrivée d'un train à La Ciotat. The flatness of and absence of colour and sound from the image evidently did not prevent it from seeming real, an indication of the importance of belief that is all the more significant in a fantastique narrative such as the one presented here. (To introduce another relevant Shakespearean reference point, Hamlet, the issue is that of distinguishing between the real and that which only seems to be such, a situation inevitably complicated by the power of belief to here make the supernatural real and / or real in its consequences.)

In terms of the latter, it is all the other sensory information that is not quite brought into play, in that Margaret would presumably have some notion of where Hichcock's voice was emanating from by virtue of her embodiment and the information coming from her entire sensorium – a multi-sensory, cinesthetic approach that the filmmakers elsewhere succeed in evoking / invoking, not least in Margaret and Livingstone's visible and palpable revulsion at the sight and, perhaps just as importantly, smell of Hichcock's decaying flesh.

This is also, however, about the only thing I can really find to criticise about the film.

Production values and performances are good, even with the usual limitations of dubbing, and the filmmakers' evocation of small town Scotland, 1910, surprisingly effective, the shift in locale making it easier for them to convince us of its reality as compared to the London metropolis of The Horrible Secret of Dr Hichcock or the Paris of I Vampiri.

The character of Canon Owens, the voice of presbyterian morality and a consistent chorus on the action, voicing his and / or the community's disapproval at Hichcock's unorthodox beliefs and experiments prior to his demise, and at Livingstone's staying at the house subsequently, is particularly convincing in this regard.

True, the professional historian could probably find little details that don't quite ring true, but in this it's no different from a Hammer horror film of the same time (are Dracula's Holmwoods in mittel Europe or middle England?), with the general look of the film, with lavish on a budget production design and expressive use of colour and lighting, serving to further strengthen the comparison. 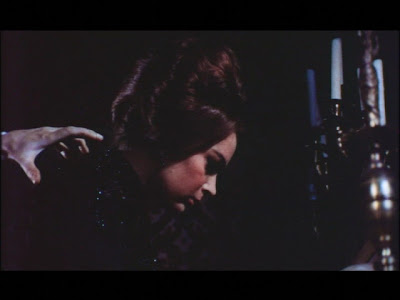 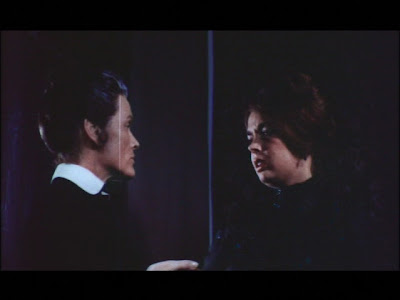 Harriet White's housekeeper creeps up on Barbara Steele yet again

One significant difference, however, is that the physicality of the Hammer gothic would seem to have largely precluded uncanny scenarios. Hammer monsters tended to be (corpo)real and dealt with as such by the savants (i.e. the palpable sexual threat Dracula represents is countered by the prophylactics of stake and crucifix), it being their mechanical thrillers such as Taste of Fear or Paranoiac that are of more interest as a point of comparison for the ontological and epistemological questions of the sort found here. 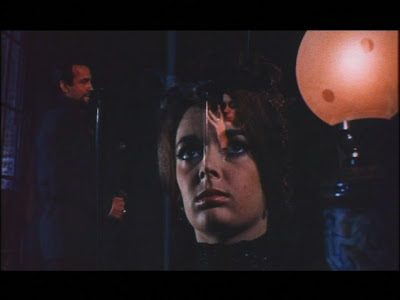 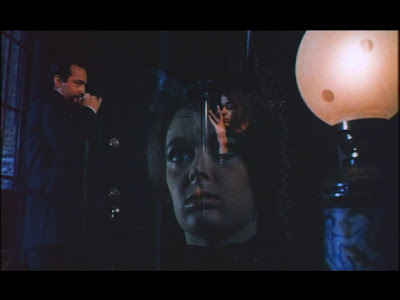 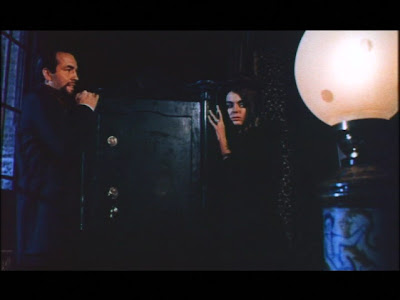 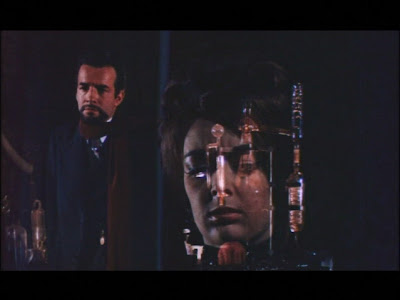 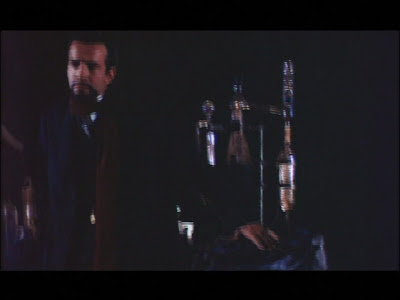 Do you remember? Is it real or all in her mind?

More importantly for the typical viewer less concerned with such theoretical and metaphysical speculations, there's a care evident in the writing and direction, with scarcely a line or shot being wasted. Note, for instance, how Margaret's admonition to her hisband whilst performing the daily ritual of shaving him, “Don't move darling, or I'll cut you,” prefigures a later razor slashing that still has the capacity to shock. Or take the way in which the opening credits, playing out over a séance, finish up on a skull, as the naturalistic introduction of a symbolic memento mori that will recur, along with a number of other key fetish objects, like the bottle of Dutch gin and the music box, to “bring back memories” in an almost Proustian way.

Again it is not hard to see Freda's influence on Argento, even if the way in which the two filmmakers approach these fetish objects is somewhat different, Freda more inclined to establish significance through words what Argento does through images, the kind of hyper-realistic defamiliarisations found in Deep Red have no obvious counterpart here. 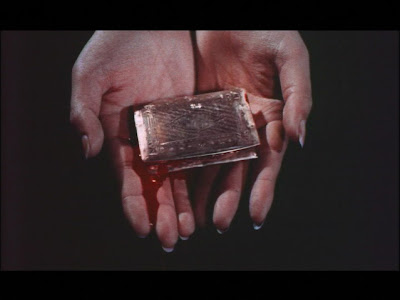 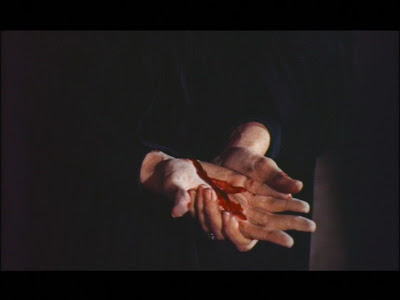 “Out out, damned spot” – will Margaret's hands ever be free of blood?

One question remains: when Canon Owens offers his summing up, that “the Devil is a very real person,” to whom might he be referring amongst the protagonists? Specifically, is the Devil incarnate as woman or man?

The film is available on US NTSC DVD from Retromedia, and comes double billed with Alfred Vohrer's Dead Eyes of London.
Posted by K H Brown at 10:48

Thanks for any tips.

I've got Hichcock on a a DVD-R sourced from a 1980s UK video release, complete with 18 certificate at the start, which I got off ebay. The picture quality's not that great however - the colours are fine, but there are moments when the tracking goes. If nobody else comes up with a better alternative then let me know if you'd like me to burn you a copy.

I saw Hichcock on the big screen at Dead by Dawn a number of years ago - great experience, although the print they had was so old and washed out and everything had a pink tinge.

Now if anyone has The Witch's Curse, let me know...

I've sent you an email following on from this.