While vacationing in Haiti with his wife Grace (Anita Strindberg), Fred Wright (Gabriel Tinti) decides to make an impromptu visit on an old friend, Williams (Anthony Steffen), a doctor. 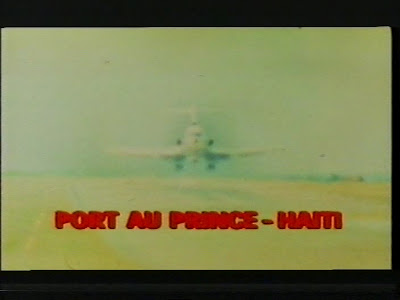 A classic giallo opening as the plane touches down

Fred's motives are not entirely pure, however, with it soon emerging that he is one of various parties interested in a new wonder drug that Williams has developed, some of whom will stop at nothing - including murder - to secure it for themselves. (Genre fans may be reminded of the plot of Bava's Five Dolls for an August Moon in this regard, with the brightly coloured visuals and Piero Umiliani's not dissimilar lounge score reinforcing this intertextual connection.) 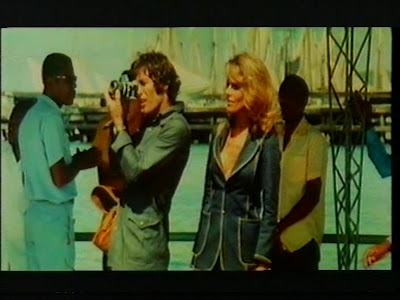 The touristic gaze at the exoticised other? Tinti and Strindberg on vacation

The first complication is that the idealistic Williams appears to have no interest in selling the drug, regardless of the price...

The second complication is that the drug, the sample of which has gone missing, may in any case also have potentially fatal side effects for those who take it, with one of Williams's native assistants turning up dead soon afterwards, his blood being almost like water in its appearance and chemical composition... 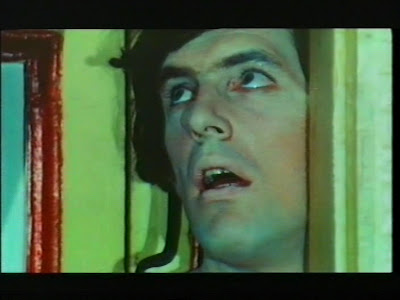 A representative of corrupt officialdom? 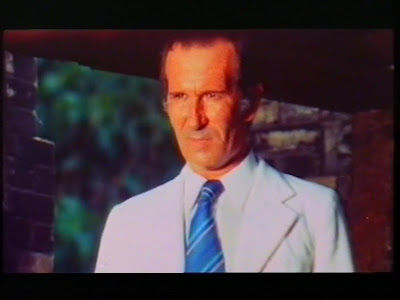 The man in the white suit? Umberto Raho has a small but pivotal role

Although showcasing a number of characteristic giallo themes, being bookended by the arrival and departure of a Pan Am jet and featuring the obligatory unidentified black gloved killer (or killers) working their way through a swathe of victims, the gloves admittedly somewhat incongruous in the tropical setting, Death in Haiti AKA Tropic of Cancer offsets such routine elements thanks to its atypical setting (rum rather than J&B being the drink of choice) and the inclusion of some documentary style footage of cockfighting, a slaughterhouse and voodoo rituals. 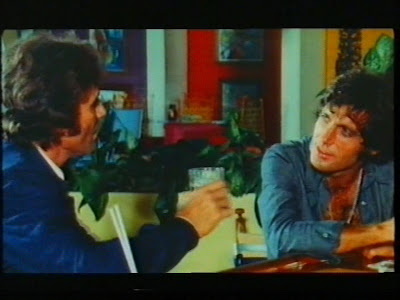 A credit at the end identifies this footage as having been taken from reality, with one having no reason to doubt this; if the voodoo footage is deployed as “exotic” backdrop for a thriller, this still accords with that Griersonian definition of documentary as “creative treatment of actuality”. 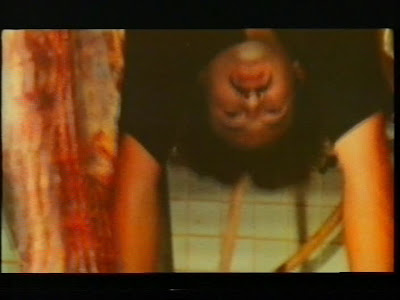 A shocking discovery in the abbatoir

These elements also transcend the mondo label that they might unthinkingly evoke.

Yes, we can no doubt impute that they express the “civilised” white man's fear of the “primitive” black Other, with that inevitable racist emphasis on the “threat” black male sexuality poses towards the white woman, as the exclusive property of the white man, but the truth is more complex and the film's representational strategies and politics more subtle and intelligent.

In the slaughterhouse sequence the imaginary boundary between white / black, and civilised / primitive is dissolved by the rational, scientific and “humane” organisation of the plant, which Williams is required to inspect as part of his duties, the logic of its operations really no different from those of the Parisian slaughterhouse of Franju's Blood of the Beasts; it should also be noted that the sequence is not completely gratuitous in terms of plot either, insofar as the body of one of a henchman who had earlier beaten up Williams is found hanging from a meathook.

Likewise, whilst one of the voodoo sequences climaxes with the ritual sacrifice and slaugher of an cow, its throat being slit on camera, that the filmmakers also include a voodoo cum Christian wedding ceremony, an unfamiliar rite of passage becoming a familiar one as we transition from the naked bride and groom lying on mats on the ground to entering the church in black suit and white dress with veil, along with some quite extensive discussions from Williams of the origins and nature of voodoo practice, indicating a genuine anthropological interest as much as the wild eye of the stereotypical mondo filmmaker.

We can also note here a well-mounted voodoo-inspired hallucination sequence in which Grace unconsciously attempts to work through / out her contradictory feelings towards her husband, Williams and her present environment. Visually reminiscent of both Polanski's Repulsion and Fulci's Lizard in a Woman's Skin - the latter also coincidentally featuring Strindberg - the dynamic of attraction / repulsion that emerges is one that speaks of both hopes and fears, of repressed desires that return precisely because they can never be entirely eliminated. 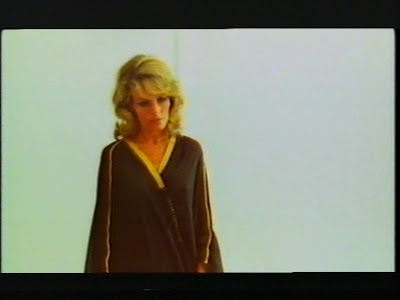 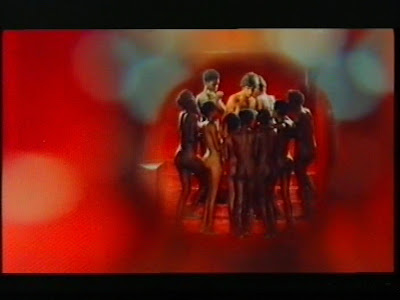 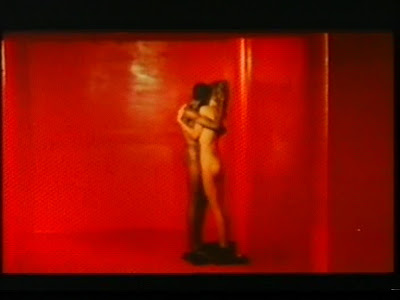 In dreams I can rule your life

If it is probably fair to say that the attempt to combine documentary and giallo aesthetics and approaches does not always succeed, the filmmakers certainly deserve credit for trying to do something different. The combination of talent is interesting to note in this regard: Gian Paolo Lomi and Eduardo Mulargia co-directed, while Mulargia and Steffen co-wrote, perhaps suggestive of being both one of the Brazilian lead's more committed projects (generally just an actor, he also co-authored and produced Django the Bastard) and of a distinct division of labour amongst the directors. For while Mulargia can easily be characterised as a run of the mill filone filmmaker - albeit with films like Death in Haiti as a salutory reminder that there is frequently more to the formula film than simply following the formula - Lomi is something of a mystery man, with the IMDB listing only one other credit for him. One of the film's most memorable presences, Alfio Nicolosi, who plays an admittedly rather stereotypically gay figure, would also appear to have only ever appeared in this film, something of a suprise seeing as his corpulent, cherub gone to seed form would seem to have made him a natural for playing decadent figures for Fellini or in the Decamerotics of the time.
Posted by K H Brown at 14:20

Alfio Nicolosi also had a part in Jacopetti/Prosperi's FAREWELL UNCLE TOM as the blonde haired stud farm owner,this was also partly filmed in Haiti and Giampaolo Lomi was part of the production crew.Check out Lomi's personal 8mm behind the scenes footage on the BU disc,some amazing stuff including Papa Doc and his secret police.

I don't know why I didn't recall Nicolosi from Farewell Uncle Tom - it was certainly a film I was thinking of when trying to formulate my thoughts about Death in Haiti, as I knew of its being partially shot there and was also thinking about the way in which it again does that curious whose-side-is-it-really-on kind of reversal, albeit considerably more problematically.

The other film was Maya Deren's Divine Horsemen: The Living Gods of Haiti, from this I couldn't quite decide if the energy in Death in Haiti's voodoo scenes was something of a cliche, as a stylistic trope to convey the frenzied nature of the celebrants, or a genuine and poetic device.

Were Lomi and Nicolos Italian ex-pats in Haiti then?

Is there a torrent for this movie somewhere? I really want to see it...

I watched it through a DVD-R, sourced from the Irish EKO video release. I don't recall seeing any torrents out there, though that doesn't mean they don't exist - maybe someone else knows better.

If you're still stuck, send me an email.

Oh my god! A film with Anita that I havent seen!
There's no legit release of this right??

I don't think there's a legit release - the world doesn't seem to be crying out for "the Eduardo Mulgaria collection" ;-)

Since you already have it, can't up a torrent of it at tracker3? I just upped Paranoia, which was very easy, and fun to do...

Ok thanks!
But could you upload it to a torrent site like Tracker3??
That would make my day!!!

Kim - I'm not sure if I have the software for encoding it to AVI or the time for creating the bittorrent file etc, as it's something I've never done before. If you'd like I'll happily send you a copy of the film to process and upload for the rest of the fan community to share - just email me your details.

Once again Keith, a great review..I'm gonna try and hunt this down.

Keith, I emailed you about this one!
Did you get it??

Yes Kim - I've got the disc ready to send out to you tomorrow.

Thanks for letting me know. Hope you enjoy it :-)

c'mon Kim, still waiting on that upload to tracker 3...hope you haven't changed your mind and decided not to share.

A bit of update on Alfio Nicolosi: he lives in Fortaleza, Brazil, with his wife and his child Vespasiano. He is now a real estate developer and an oriental rugs and carpets trader (one of the most famous and respected worldwide, check on the web); not only, he is still active in the arts having written the score for numerous famous musical plays in Brazil. He is constantly travelling throughout the world between the Orient, Italy, Portugal and Brazil. Unfortunately, he has not seconded his acting talent and has disappeared from the scenes right after Tropico del Cancro.

anybody know where i can download this flick from? any torrent site or anywhere else? thanx!

To Stephen Grimes
No, Alfio Nicolosi did not work in Jacopetti's Good by Uncle Tom. The fat man you are talking about is Mr. Gordon Felio, an american actor based in Haiti at the time and alredy passed away few years ago, as well as Anthony Steffen.
Giampaolo Lomi

As far as Alfio Nicolosi is concerned, I think there is a misunderstanding. It is absolutely correct that he is a reputable carpet trader and that he lives in Fortaleza with his child Vespasiano. It is also correct that he played a part in the movie. But he is NOT Peacock!! I know Alfio personally and I clearly recognize him in Murtok, the assistant of the business man: he is the young guy with mustache who kicks repeatedly Dr Williams.

Alfio Nicolosi never work in any other movie but Tropico del Cancro. He used to live in Fortaleza and in Sicily and he passed away in december 2014.