This, as you might know, is the King Kong spoof that was deemed to be a bit too similar to Dino De Laurentiis's remake of the same year (1976) and as a result was prevented from being released. Female lead Rula Lenska was apparently pleased by this turn of events, as she felt that the release of the film would have hampered her career. 30-plus years later it's hard to see what the fuss was about: The film would be difficult to confuse with the De Laurentiis version and, while certainly bad at a technical level, nonetheless has a certain something about it. 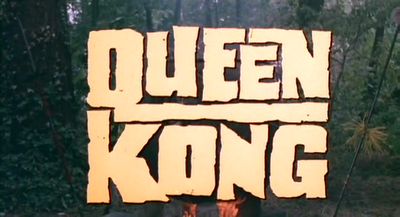 We open with a man being chased by hostile natives and ending up in their cooking pot. It is the latest scene in Luce Habit's (Lenska's) latest epic and proves the last straw as far as the actor is concerned. 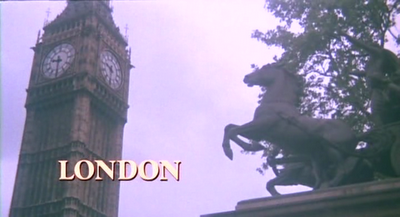 In case you couldn't tell, and a possible nod to the krimi?

The demanding director returns to London to seek out a new lead and soon finds one in the shape of happy-go-lucky gleaming-smiled rogue Ray Fay (Robin Askwith). 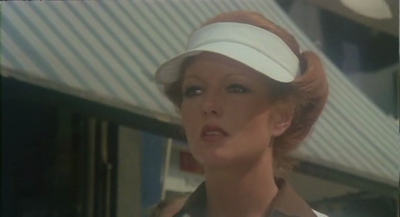 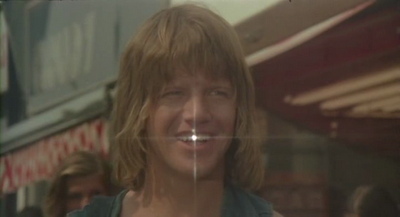 The female gaze and its object; much like Four Flies on Grey Velvet Handel's Hallelujah Chorus plays here

In a nod to the original King Kong Ray's first glimpsed attempting to steal an apple. In a joke at the expense of the remake he then tries stealing an “original reproduction” King Kong poster from an Italian junk shop owner. (Ray: “Where is he, the little Italian fink, I'm gonna sue ya!”) 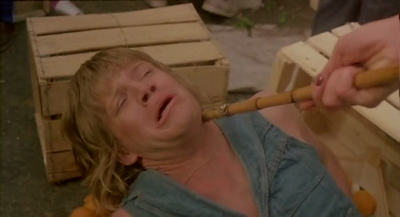 “I'm taking this peach with me”

Luce pays off said fink, slips Ray a mickey finn as his attention is distracted by some hippy types from whom he attempts to cadge a joint, and has The Liberated Lady set sail before he can awaken and start questioning the contract he may or may not have signed.

The Liberated Lady then arrives at the Island of Lazanga. The high priestess (Valerie Leon) wants to sacrifice Ray to Queen Kong but Luce is having none of it. Ray winds up being offered up to the giant ape anyway only for her to fall in love with him. What neither the high priestess or Luce were expecting, however, was for the feeling to be mutual...

Around about this point the action jumps back to London as Luce decides to put Queen Kong on display...

Throughout the gags come thick and fast, mostly missing but with enough hitting not to be a complete disaster.

The first thing that made the film work for me was the filmmakers' awareness that what they were doing was, at some level, basically crap as when, en route to Lazanga we're treated some highly self-referential and deprecating commentary on the B-film and its limitations.

Luce: We're on our way to Darkest Africa, to make a film that will make you the biggest star in Uganda
Ray: Oh, terrific

The second, following in part from this, was the inability to actually position the film as X (bad) or Y (good), with a particular excess of images that could be construed as either sexist or anti-sexist, racist or anti-racist, or both at the same time.

On the one hand we have the crew of The Liberated Lady singing a song that name-checks such feminist figures as Germaine Greer and Jane Fonda:

Burn your bra
Burn your panties
Call you ma
Call your aunties
And ship up on the Liberated Lady
It's the new dance sweeping every nation
As they swing to the beat of women's liberation
Ladies entering into the lion's den
Fighting for their place next to men
Grab a Honda with Jane Fonda
Give a cheer for Germaine Greer
Etc.

On the other hand we have the selfsame crew/singers dressed in hot pants and cropped tops doing a dance routine that presenting the kind of spectacle for the assumed male gaze a Laura Mulvey most definitely would not have approved of: 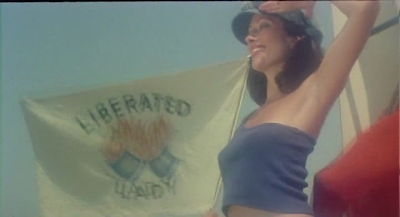 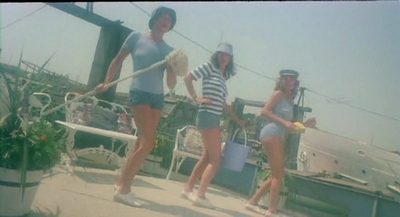 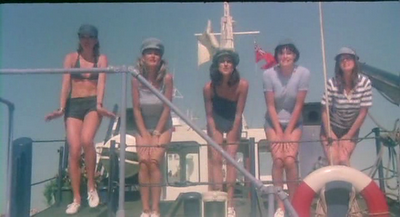 On the one hand we have the primitivism and ignorance of the inhabitants of Lazanga being foregrounded, as with a public baths which comprises a number of toilets and sinks.

On the other hand its native inhabitants are ethnically diverse and run the place very as a tourist trap – “Lazanga where they do the Konga” and accept American Express and Diners Club cards – offering the possibility that the likes of the baths are there as a joke at the expense of the civilised outsider who thinks he (or she) gets it.

At the core of this and further complicating things in the figure of Queen Kong.

One reading of the original King Kong is, after all, as a specifically white racist fantasy about the white beauty and the black beast: Kong represents a monstrous black male sexuality and must be destroyed so that the white man can continue to enjoy his exclusive access to the white woman.

If this seems far fetched consider Kong author Edgar Wallace's work as a war correspondent during the Boer War; his Sanders of the Rivers novels; or the frequently recurring Murders in the Rue Morgue styled trope of the ape/missing link monster-killer in his thrillers.

Or, in the Italian context of the co-production, consider a Fascist-era propaganda which depicted a US Negro soldier as an ape intent on assigning a price to the Venus de Milo to thereby also implicate the Fascists as defenders of Italian / European civilisation against the primitive/savage other. 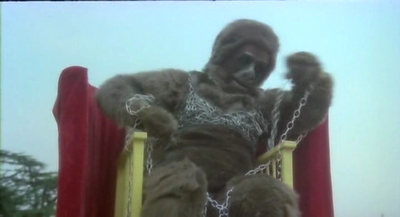 The enslavement of the black woman by the white woman?

But what we have here is a scenario where the white proletarian male rebels against the white bourgeois female and affirms his love for a black female of ambiguous class position (Queen in her own land yet taken away from there in slave chains) in a way that cuts across class, gender and ethnic lines in interesting ways. 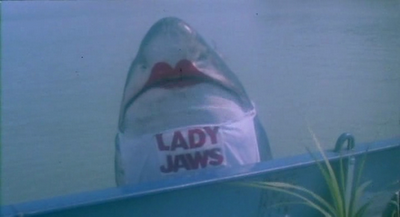 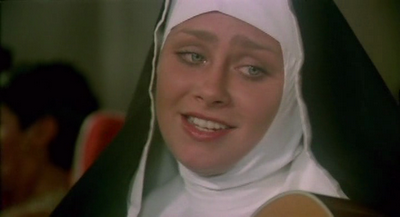 Linda Hayden as a singing nun

In the end, it all perhaps comes down to that most conservative and radical of powers, the one which every identity ultimately relies upon and yet often also has problems with: Love.

And here there is perhaps one kind of love which proves unacceptable, which is not allowed to speak its name. No, not bestiality, if we read Queen Kong and Ray's relationship as that between ape woman and man, but homosexuality.

Consider the gay-coded actor at the start: “Listen dear, I'll sue you deaf, dumb and blind if you don't get me down from here. Mind the hair dear! Mind me ankles! Now get out the way you silly bitch! I'm calling my agent, and my lawyer, not to mention my tailor!”

Or Luce's remark as she prepares to take Queen Kong to London: “She might have been a Queen on this island, but in London half the guys you meet are queens”