The Confessions of Robin Askwith

In December 1973s Robin Askwith was sent a copy of the script for Confessions of a Window Cleaner by his then-agent, who suggested that he might consider auditioning for the role. The young actor wasn't too sure. Would a low-budget British sex comedy really be a positive career move, considering that his previous screen appearances had included working for Lindsay Anderson on If... and Pier-Paolo Pasolini on The Canterbury Tales? 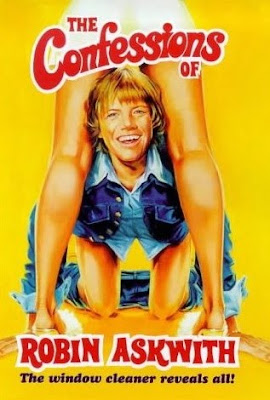 Still, in the challenging circumstances of the British film industry post-Swinging London few actors could afford to be too choosy. Work was work, after all. Accordingly Askwith auditioned for the part of window cleaner Timothy Lea; won the role which a number of other up and coming thespian friends had already declined; went on to appear in a further three Confessions films, invariably disliked by critics but popular with the audiences; generally helped keep the British cinema in business; and came to be known as much for his bum as anything else.

It's an measure of the importance of the Confessions films to Askwith's life and career that his memoirs are themselves entitled Confessions... and begin much with the story I've outlined above.

His early life comes later – although there are hints of the importance of a traumatic childhood encounter with polio earlier – as do his pre-Confessions experiences in working with Anderson, Zeffirelli and others.

Fans Peter Walker's films may be disappointed that Askwith doesn't say much about them, whether more because he considers Walker a friend and didn't want to dish the dirt too much or because there wasn't too much dirt in the first place.

There are however some amusing anecdotes about the likes of Confessions of a Window Cleaner director Val Guest, who apparently enjoyed filming the multiple versions of the sex scenes required for the film a bit too much; fellow Hammer alumni assistant director Bert Batt, who most emphatically did not; Guest's replacement for Confessions of a Pop Performer Norman Cohen, who suffered from imaginary body odour and had a tendency to say 'Cut' instead of 'Action' and vice-versa; Irene Handl and her shitzu; the troubled Alan Lake; and the notorious trash epic Queen Kong, still legally impounded at the time of the book's publication in 2000.

While it could have done with some better proofreading – not that I can really comment, except for I do this for fun / free – and is first and foremost about Askwith and his enduring association with his most famous role and only secondarily about British popular cinema, Confessions... is a fun read and comes (oo-er) highly recommended.
Posted by K H Brown at 17:58

Do you know where to find the cover in a higher resolution? Thanks alot!

I think I took the cover from the view larger version of this image on its Amazon.co.uk page, which I then cropped and resized. I'm not sure how much bigger the Amazon one was, though.