Suzie arrives in London from the provinces, hoping to catch some of that Swinging London vibe that she has heard about through the mass media. Fiona takes Suzy under her wing and introduces her to the band she hangs out with. After a short while Suzy does an All About Eve and usurps Fiona's position, with fatal consequences...

It may have plenty of sex, drugs and rock and roll, but 1970's Permissive is not exactly what you'd call a fun film. Rather it's one of the most dreary, drab and depressing films you could hope to see about the realities of the music world, more Cocksucker Blues than Almost Famous, but with a band whose material circumstances are more akin to those of Black Flag than the Rolling Stones.

Stylistically the film is an odd combination of pseudo-documentary nothing much to see for the most part punctuated by moments of machine gun editing, as if someone had decided to make a kitchen sink drama of the Cathy Come Home or Bleak Moments type with editing inspired by Performance. 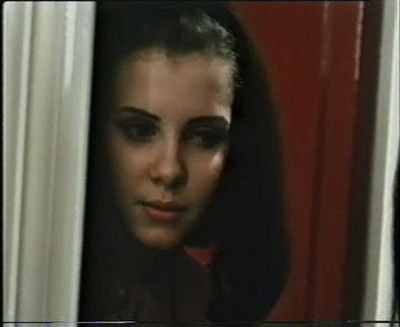 Is it Madeleine or Maria? One of the Collinson twins as a groupie

Even more intriguingly, the editing isn't used to make the musical performances more interesting, as might be expected, but rather to present disconcerting (acid?) flashbacks and flashforwards as to the characters' relationships and fates.

The big surprise is who was responsible for it all, with notorious hack for hire Lindsay Shonteff writing and directing and Tony Tenser's Tigon producing.

Yes, part of the business of exploitation filmmaking was exploiting the audience in giving less than is promised.

But to make a film that is utterly joyless, which leaves you feeling cheated and like you also just might want to end it all?!

Either Shonteff seriously pulled the wool over Tenser's eyes and intended this all along as some sort of perverse artistic statement, which seems unlikely, or something just started to happen once the cameras were rolling.
Posted by K H Brown at 23:31