“A movie, once it is dubbed, is a new product, akin to its master and at the same time significantly different from it. Every translation is an invention, the substitution of one sign for another, a new performance of a previous text which, as such, constitutes an original text.” (1996: 11)

A good illustration of this point in Argento's work comes from The Bird with the Crystal Plumage and the exchange between Sam Dalmas and Inspector Morisini after the former has just survived an assassination attempt by the gunman, Needles:

In the English version their exchange runs thus:

Morisini: “Do you think you could recognise him?”
Dalmas: “I didn't see his face clearly”

In the Italian version it is different:

Morisini: “Do you think you could recognise him?”
Dalmas: “It's impossible to forget a face like that”

In the English version, is it that Dalmas is increasingly uncertain of the evidence presented by his own eyes? Is it that he is reluctant to tell Morisini the truth, because this may compromise his own investigations? A bit of both? The first interpretation certainly seems to fit with the film's problematic of reversing our perceptual expectations, the most recent example of which the way in which Needles, in his distinctive yellow jacket, was easily recognisable until the moment he entered a room full of identically dressed individuals, at which point Dalmas became the one who stood out; it is also worth noting, however, that the jump cuts within the cut-in on Needles serves to destablise our / Dalmas's vision of the scene, regardless of the dialogue: 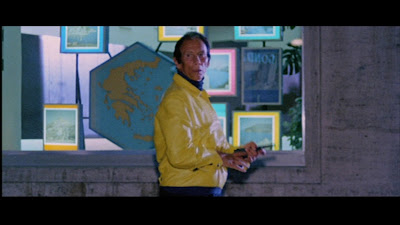 Re or de-cadrage; an unstable perception
Posted by K H Brown at 11:32

The exchange in the German and French versions is identical to the Italian version - maybe this is just a problem of getting the lip movements to match the actual dialogue ?

Thanks for the info - if the German and French versions match the Italian, it sounds like the Italian / German / French are the "proper" version departs from for pragmatic reasons like you give. I guess it's again one of those situations where it would be easy to read too much in, or at least where having an awareness of the differences provides a reason not to...