Following a powerboat accident, businessman Marco Breda (Philippe Leroy) is left with a blood clot on the brain and a decidedly negative prognosis, with perhaps a ten per cent chance of a successful operation.

Miraculously, however, Marco pulls through, only to then be diagnosed as suffering from amnesia.

Soon, however, it seems that at least some of them have ulterior motives – but really do you expect anything else from the likes of Rassimov and Ressel – and quite possibly less than his best interests at heart.

Unless, that is, the murder of former gardener Foschi after he had sought a meeting with Marco in order to discuss something was in fact for the amnesiac man's own good; in the convoluted world of the giallo stranger things having happened... 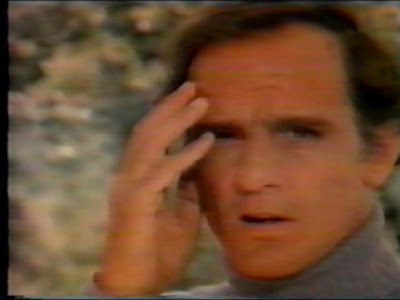 Philippe Leroy, outfitted in stylish polo neck, tries to remember – or to forget...

The biggest difficulty most are likely to have with this 1971 giallo – besides a fuzzy, panned and scanned image – lies in getting past the truly awful title theme and the interminable powerboat racing footage that follows shortly thereafter. 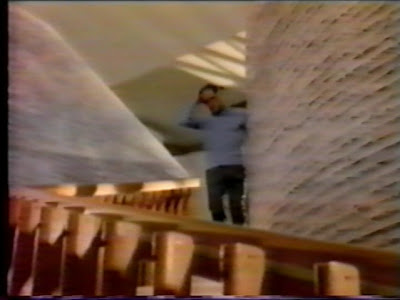 The landscape of the mind, via a paradoxical combination of real and expressive / expressionist architecture and design

Happily, once we’re plunged into the convoluted plot, replete with double-crosses and potentially telling exchanges of dialogue and glances – the difficulty coming, as ever, in sorting out that which is significant from that which we’re meant to believe to be such by generic expectation and / or directorial manipulations – these are easily forgotten. 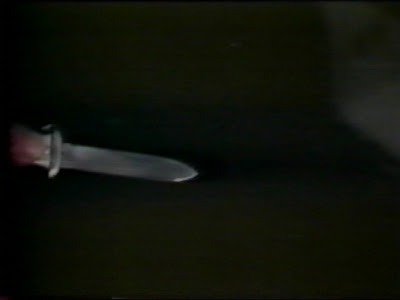 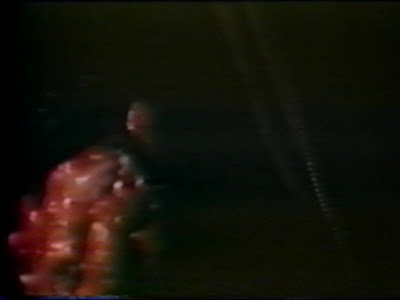 A blade in the dark and its effect; the gore effect feels out of place, however, and doesn't really convince, especially as one blow from this blade is supposed to have caused it.

Unfortunately, however, so is the enigmatic fragment that is inserted between them, in which an unidentified figure stalks, gun in hand. For, as eventually becomes apparent, this is the beginning that’s supposed to be answered by the end. Unfortunately seeing as the figure in the opening sequence is not wearing gloves and the figure in the closing one is (and black leather ones at that), the connection is somewhat undone by carelessness, failing to have quite the desired impact. (See Bava’s Rabid Dogs for an example of how it should be done, with an ending that throws everything preceding it into an entirely new light and, more importantly, does so in a way that makes sense.) 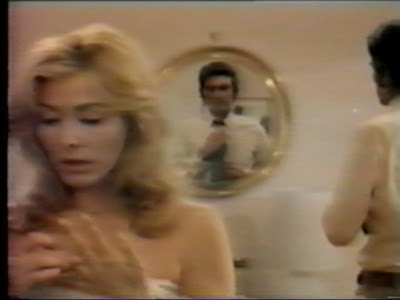 Classic mirror use – intimations of narcissism and duplicity

More importantly, the ending also evinces an awkwardly handled combination of irony and morality, the former presumably for the Italian side of the co-production in that let’s enjoy these rich, beautiful people doing nasty things to one another sort of way and the latter certainly more in line with the dictates of the Spanish censors of the time.

It’s a particular shame because almost everything in between works well, keeping the viewer engaged with the mystery and wondering what will happen next, stretching credulity – why did the police inspector wait until Marco has arrived home before mentioning the possibility of sabotage; how did the surgeons manage to operate on Marco’s brain without needing to shave his head to give but two – but never breaking it, nor the implicit contract with us, whereby we’re not supposed to question such things. This is, after all, a universe of heightened realism, wherein a stormy night can be relied upon to arrive on cue to add dramatic weight to an already suspenseful (mise en) scene. 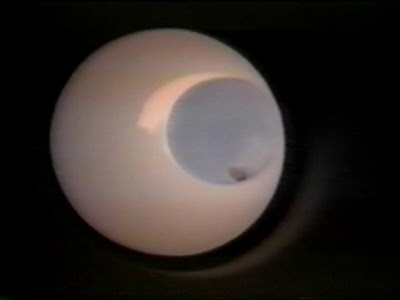 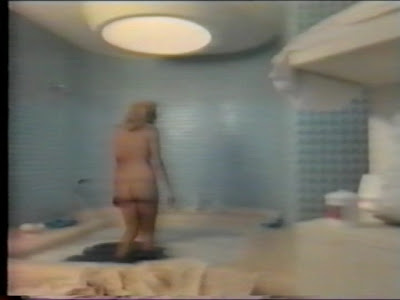 An ocular design and what it looks down upon... 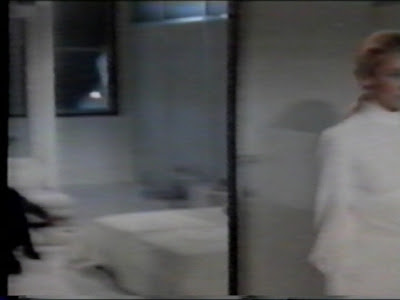 and another example of the striking production design, this time let down by the pan and scan

Given director Tonino Ricci’s less than stellar reputation – a reputation which, I must admit, has inhibited me from seeking out more of his work, and so could be unfounded, like that of Umberto Lenzi, whose gialli Cross Current perhaps most resembles in its approach – it seems fair to put the film’s success, such as it is, mainly down to the contributions of his collaborators. Could you get much more iconic than this? Black gloves and a yellow phone...

Flavio Mogherini’s production designs for the modernist villa are especially outstanding and allow for some striking compositions which veteran cinematographer Cecilio Paniagua makes the most of, while – away from that theme tune, which one would be pleased to hear was in fact the work of another – Giorgio Gaslini’s avant-jazz score, heavy on vocalism and discordance, recalls Morricone’s work on The Bird with the Crystal Plumage and his own on So Sweet So Dead to good effect. (Curiously by way of another Argento connection, this time to Four Flies on Grey Velvet, the film also sees one character meet their demise in slow-motion to a lullaby type theme.)

The cast play their roles as to the manner born. Maybe Ivan Rassimov didn’t have a great range, or at least didn’t get much opportunity to demonstrate it, but he was a master of sinister villainy. Likewise, if Rosanna Yanni was rarely required to be much more than decorative in films of this type, she decorated so beautifully.
Posted by K H Brown at 12:02