“This is how it all ended. Tragically. And to think it was all planned out, down to the smallest detail.” 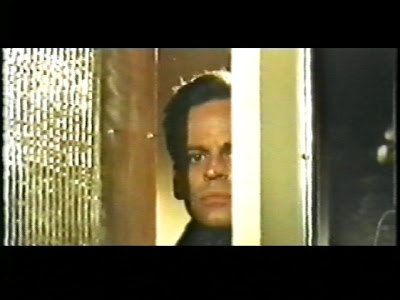 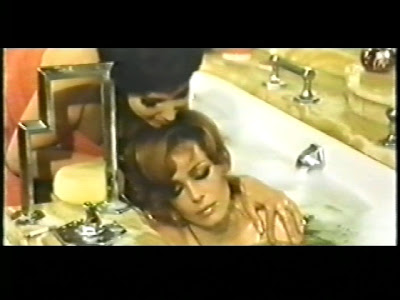 John Alexander looks in on his wife Helen and her 'friend' Liz and doesn't like what he sees.

Thus proclaims John Alexander (Klaus Kinski) in voice-off on arrival at the burning wreckage of the car he has been chasing, which has just been smashed to bits in a collision with a train.

It's a powerful opening that immediately sets you wondering and easily overcomes any qualms about the dodgy model work.

The credits, featuring various pseudonyms roll over the wreckage and we are plunged back in time. John continues:

“I met Helen Brown over the Holidays. I immediately fell in love with her. And we got married. The minute we got back to London Helen's attitude changed quickly.” 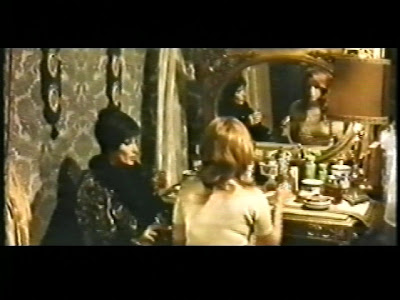 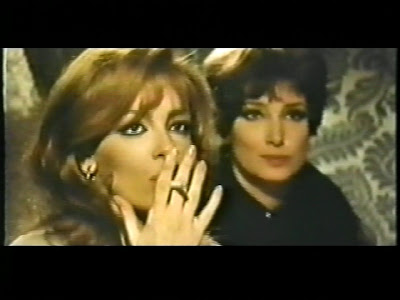 The problem is that Helen (Margaret Lee) has become a bit too close to her friend Liz (Annabella Incontrerra), with further insult to masculine pride stemming from the fact that it is Helen who is the wealthy one, owning 90 per cent of the shares in the company and employing both her husband and father, Mr Brown (Sydney Chaplin). 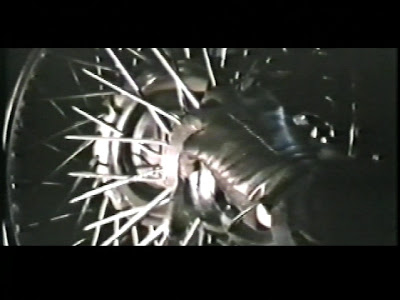 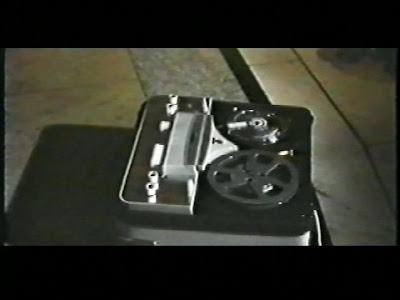 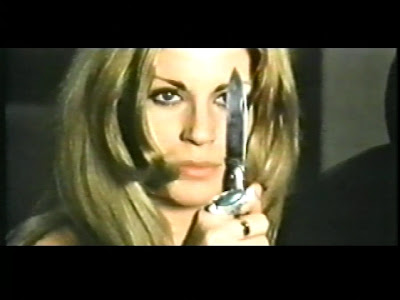 Classic giallo and krimi imagery – black gloves, tape recorder, woman with knife where not all may be as it seems

At night someone plants a small device in Helen's sports car. 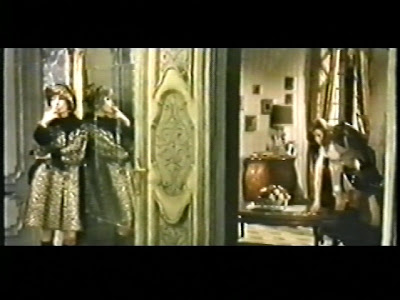 The 'split' screen and the mirror image

The next day she drives off at high speed, with the news later coming through that she has been in an accident. The body in the vehicle is burned beyond recognition, but there seems little doubt it was Helen. 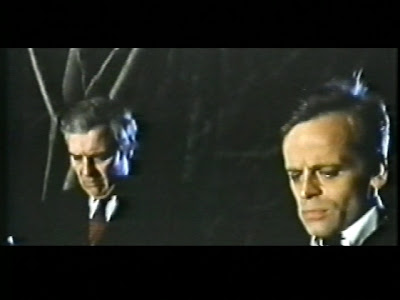 Husband and father at the accident scene

Unfortunately for whoever planted the bomb, the police have their suspicions of foul play – especially seeing as they have learned of Helen's will, in which she was to leave everything to John and the issue of a divorce likely leading to a change in it.

Finally returning to the family home, John is surprised to hear Helen's favourite piece of music playing upstairs. Investigating, he finds Christine, 18 “and with no inhibitions,” in Helen's room taking a shower. 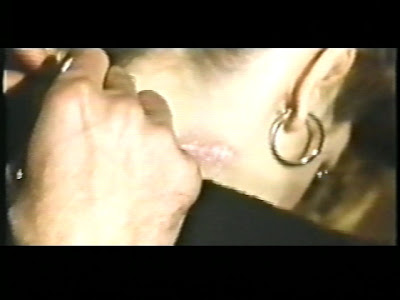 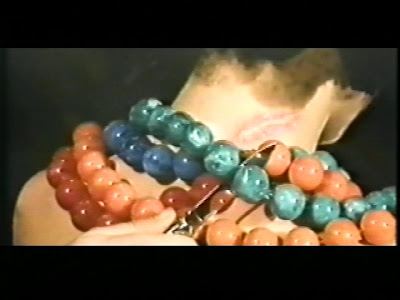 In the late 1960s the dominant type of giallo film would seem to have been the sexed-up Hitchcock style thriller, most obviously represented by the likes of Umberto Lenzi's Orgasmo and Paranoia.

It's perhaps no surprise that Riccardo Freda should also make a foray into this subgenre, given that he had already produced the Hitchcockian gothic The Horrible Secret of Dr Hichcock earlier in the decade, while for co-writer Lucio Fulci the appeal of the form seems likewise evident when we consider his own take on very similar material in Perversion Story.

But, if Doppia Faccia can be read at yet another revisioning of Vertigo in particular, it also has its own distinctive identity with one remaining unsure as to John Alexander's role in the proceedings right up until the end. Is he the victim of a conspiracy or a conspirator, the Scottie Ferguson or Gavin Elster figure?

The role is one that Klaus Kinski is ideally suited for, his innumerable forays into the German krimi film having previously established him as both the perfect villain and victim / red herring, most obviously in the case of Die Blaue Hand, where he actually plays both in the form of identical brothers.

As far as the krimi connection more generally goes, meanwhile, it's worth noting the characteristically askew British settings; the obligatory Scotland Yard investigator, here played by Gunther Stoll; and the fact that the film was marketed in Germany to play up the Edgar Wallace connection.

Yet, equally, the film is very much a late krimi where the tensions between the 1920s and the 1960s were becoming ever more apparent, with blue movies rather than white slavers in a colour rather than monochrome film.

But if the film's true authorship and generic position are debatable – one is almost tempted to say that the title A Doppia Faccia / Double Face could equally refer to the ambiguities here as within its own narrative – its effectiveness, bar some unconvincing modelwork of the sort that often comes with the territory, is far less so. 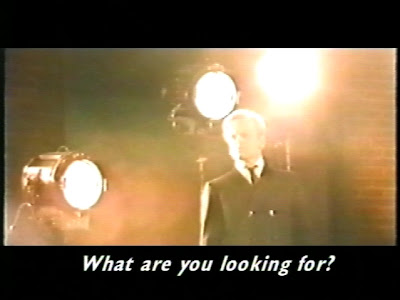 A hand-held, overlit sequence in the pornographers' studio sees Freda use the same subjective you-are-there camera as he did in The Ghost.

Freda goes predictably over the top in the hippie happening – or is that happening hippie – sequence, with the usual quota of psychedelic lights, zooms, whip pans and frenetic hand-held work. But while likewise obviously foregrounding the important clues such as John's black gloves, Helen's scar, ring and lighter for a first time or sensation seeking viewer, he also incorporates enough subtle details to reward an attentive or subsequent viewing when in full possession of the facts, be it the roses that recur throughout alongside the more familiar visual motifs of the mirror and the face half in shadow, or the seemingly casual line of dialogue.

The cast are uniformly good, Gabor Pogany's cinematography intruiging in its slightly shakiness, and Nora Orlandi's score beautifully excessive in a way which suits the mood of the piece – Liz calls Helen's favourite piece “stupid” at one point, while Helen responds that its precisely because it is “silly” that she so loves it.

Which, when you come down to it, is perhaps a perfect summation for A Doppia Faccia itself: if there are aspects which are hard to take seriously, you get the impression that more often than not the filmmakers were perfectly aware of this and knew that, in the scheme of things, this didn't really matter a bit...

The film is available on DVD from Alfa Digital in the US and as part of the Edgar Wallace krimi collection in Germany; these screenshots come from the old Luminous release. Advice on which DVD to upgrade to is welcomed.

During the hippie sequence an alternate version of one of the cues with vocals on top of it plays, which isn't included in the Lucertola soundtrack CD with The Devil's Nightmare; does anyone know if this cue has appeared elsewhere.

As with almost all Wallace krimis, the German cut is somewhat shorter (I don't know what's missing here - different cuts for different countries were often standard procedure) and the DVD has no English audioe track or subtitles.
You can always try: www.ofdb.de to see what versions are available, it's not the most accurate databse, but it's usually a good starting point (page is in German, but shouldn't be too difficult to navigate).