The Art of Italian Film Posters 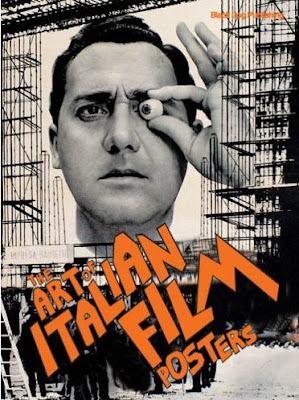 This attractive coffee-table type book does as it says, looking at The Art of Italian Film Posters, from the silent era through to the end of the 1970s – a point author Mel Bagshaw identifies as the end for the best years of Italian cinema itself and the imaginative posters that advertised it.

Devoting equal attention to neo-realism and the genre cinema of the 60s and 70s, with the peplum, spaghetti western and horror / giallo each getting a chapter to their credit, the text is largely introductory with the selections of films whose art is featured rarely including anything too obscure.

Even so the broad scope of the book means that genre and arthouse focused readers alike are likely to encounter some films new to them, be it The White Sheik or Django the Bastard respectively, while it is always welcome to see the poster artists of any country be given their dues.

The analyses of the compositions of specific images are also fresh, even if sometimes they may give one cause for dispute. Might Giorgio Olivetti's artwork on the poster for Una Pistola per Ringo be “rather soft-edged” compared to the “gritty portrayals of the west” found elsewhere because Giuliano Gemma's Angel Face character is more like a classic American western hero than most of his counterparts, for example?

The best bit of trivia was that poster artist Rodolfo Gasparri – the western specialist – was the son of Franco Gasparri, the ill-fated star of the Marc the Narc films, which he also painted the posters for.

I would still say that the genre fan is better served by the poster selections in the Western ill'italiana and Horror all'italiana collections from Glittering Images or the various books by FAB and others increasingly devoted to single directors, while the best general books on the subject for me remain Maurizio Barino's Platea in piedi series – if, that is, you can find them...
Posted by K H Brown at 10:01