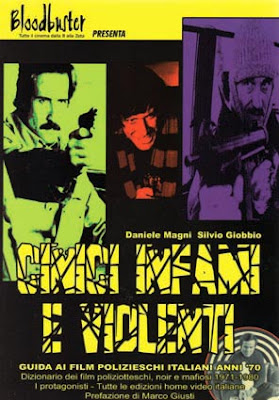 The first volume to be published by Bloodbuster, Cinici, infami e violenti – also the title of an Umberto Lenzi film, released in English as singular rather than plural The Cynic, the Rat and the Fist – provides a comprehensive guide to the Italian crime film circa 1971 to 1980.

The well-presented book, illustrated throughout with box cover and poster art, splits into four main parts: an introductory essay; an A-Z listing of productions; a gallery of 240 polizieschi performers; and listings of films by director, along with selected bibliography and discography.

The essay usefully highlights some of the main trends, film-makers and films, noting at the end the apparent omission of Fernando Di Leo from the preceding discussion on account of his preference for the term noir.

The A-Z listing represents the bulk of the volume. With the exception of a few rare titles unavailable on video or DVD each film is given a rating ranging between four bombs and a skull. Cast and crew information are also provided, along with a useful to-the-point review placing the individual film and noting points of interest. J&B spotters might care to note, for instance, that the excess of the product in Mario Bianchi's La Banda Vallanzasca is such, even by the standards of 1970s Italian cinema, that the authors describe it as “il vero protagonista del film”

For the more committed poliziesco viewer, the A-Z represents a useful checklist of obscurities to track down and see, while for the comparative newcomer it is useful simply to be able to work out what you've actually seen amongst the mass of sound-alike entries – nearly every major Italian city had its Violenta or Rovente entries it seems – and, by picking out the four-bomb titles and checking their DVD availability, what you still need to see.

Even if your Italian, like mine, isn't up to much – one hopes that there might in time be sufficient interest for an English translation, which might also note the language and subtitle options on the ever-growing range of DVD's – the mug shots of the performers and the listings by director will still prove useful. On the latter count, however, one also wishes that the authors had done the same for some of the main performers such as Tomas Milian, Henry Silva and Luc Merenda, and composers, such as Stelvio Cipriani and Franco Micalizzi.

Then again, armed with the information in the book, the IMDB and Google, new vistas of Eurotrash are opened up to be explored...
Posted by K H Brown at 12:40

Where did you get that book??
Thanks!

From http://bloodbuster.com/ who published it; there's a big banner ad on their site for it.