You never know quite what you're going to get with an Alberto De Martino film. Responsible for some of the worst examples of filone cinema, such as Puma Man and Miami Golem, he's also made directed some seriously underrated films like 7 Hyden Park, A Special Magnum for Tony Saitta and this 1982 horror-thriller.

Indeed, had Blood Link / Extrasensorial been directed by someone better known like Brian De Palma or David Cronenberg – as two contemporary reference points, for reasons that will become clear – I have little doubt that the film would be acknowledged as a classic of its type.

Dealing with the romantic theme of the doppelganger in a contemporary guise that incorporates extra sensory powers – hence the alternative title – the film opens with a waltz scene that turns into a murder scene to recall the opening moments of Shadow of a Doubt.

Given that Hitchcock's film was also intimately concerned with doubles we may assume this to be a deliberate quotation on De Martino's part, especially given that the killer, like his counterpart in Hitchcock film targets lost soul type older women.

Beyond this the film riffs on a number of more general Hitchcockian themes, such as the transference of guilt and the double pursuit narrative whereby the “wrong man” must catch the guilty one to prove his own innocence to the typically unimaginative and ineffectual authorities. 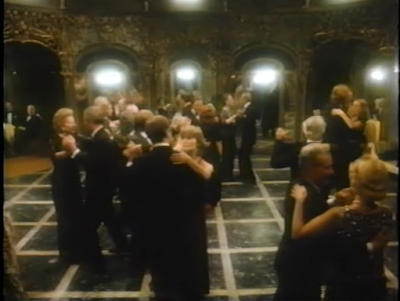 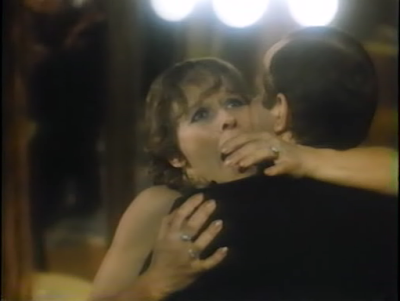 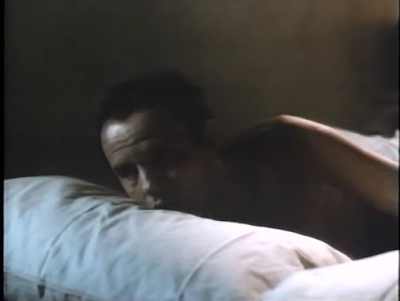 Martino also subtly misdirects us in this opening sequence as, breaking it down logically, the killer would have to have murdered his victim in plain sight of all least some of the others in the ballroom.

As the narrative continues, Dr Craig Mannings wakes up from his seeming nightmare – “I guess it was just a nightmare” – to the sound of the telephone ringing. It is his colleague and girlfriend Dr Julie Warren, reminding him that they have an important meeting at the university where they have to demonstrate that their research warrants further funding.

The meeting does not go well. Mannings insults the board and refusing to tell them what they want to know, with its head in any case being somewhat biased against their research, which involves the use of acupuncture and electric shocks with Mannings himself as the chief test subject, as unscientific. 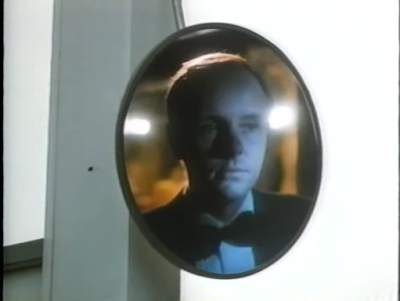 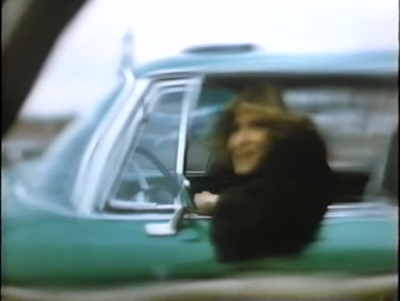 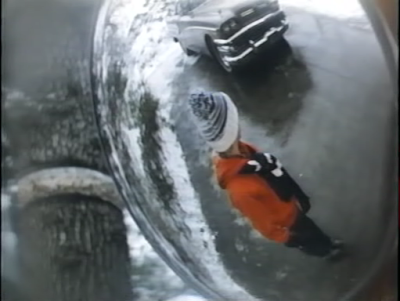 Worse for Mannings, however, are the visions that trouble him on his way to campus, in which he sees himself picking up and murdering another woman, along with various curious details like writing on a boat in German – a language he has little or no knowledge of.

Mannings starts to believe that his experiments have unleashed something within him connected to his past – a past which, even by the standards of the Italian giallo is unusually traumatic.

For starters he and his brother Keith were born conjoined. Then their parents died in an accident when they were seven years old, leaving them to be brought up by different foster parents. Then Keith himself apparently died in another accident when he was 17. “I've been searching for the answers since I was seven years old,” as Craig remarks. 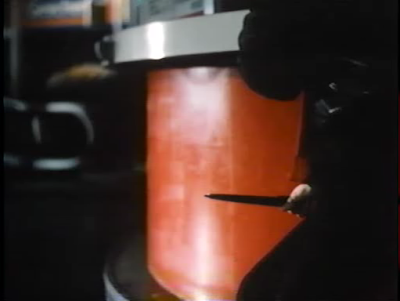 Stalk and slasher imagery with a twist

Or, rather, didn't: Keith is alive and killing in Hamburg, Germany – thus explaining the boat – and, sharing a psychic connection with his brother, also knows that Craig is well on his way to realising this and endevouring to stop him...

With its wintry locations, psychosomatic weird science and conjoined twin motif Extrasensorial recalls elements of De Palma's Sisters and Cronenberg's The Brood and Scanners. Crucially, however, De Martino uses these building blocks to create something that is recognisably his own, as further testified to by the way in which Dead Ringers and Raising Cain seem to almost return the compliment at times by then further developing some of Extrasensorial's themes and ideas. 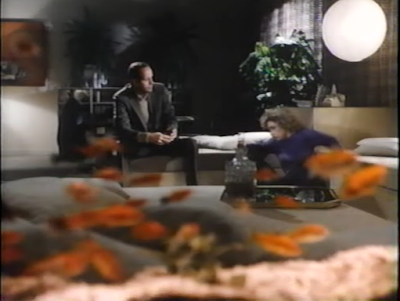 The old through a fish tank shot

And there are certainly a lot going on around such seemingly uncharacteristic Italian horror topics as memory and identity and – perhaps more familiar, if because commonly used as an analytic tool here – the workings of the unconscious. It's not difficult to interpret Craig and Keith as representing ego and id respectively or Keith as the repressed side of Craig who gives free rein to anti-social and murderous impulses his brother denies, or to see them as introvert and extravert incarnations of the same person.

Here we might also note Craig's more assertive / aggressive response to the review board and his remark to its head: “I trust you have no difficulty finding the right patients?” “No, actually I have a great deal of difficulty. In fact we're looking right now for a really tight-assed subject to see how we can loosen him up. Would you volunteer Dr Adams?”

The thing is that it's almost too easy to invoke the ideas of Freud, Jung and company here. A more cinema-specific alternative is to read the opening scene as establishing a kind of Deluzean “crystalline image” with a temporary circuit of the real and the virtual chasing one another; significantly Deleuze entitles a key chapter of his Cinema 2: The Time-Image “From recollection to dreams”. With that “irrational cut” from the ballroom to the antechamber we can't definitively say whether we're seeing a representation of Keith's actions, Craig's visions of them, or something in-between. (“I meet my siamese twin after all these years and he calls me a murderer!” “I saw you!”)

If generic requirements mean that De Martino ultimately has to provide a clearer resolution than the more thoroughgoing Deleuzean critic might like, as epitomised by the way in which the final shock is more a detachable fragment in the manner of Carrie than a challenge to narrative closure, the director nevertheless does repeatedly confuse things and states by continually using mirrors within his compositions along with some adroitly executed match cuts that take us from one brother and location to the other. (Unfortunately, as is so often the case with this kind of film, the unsatisfactory pan and scan presentation has a tendency to make a something of a mockery of the filmmakers work, undoubtedly further contributing to their ghettoisation.) 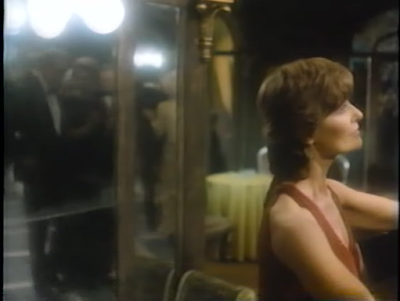 The curse of panning and scanning strikes again

The other cornerstones of the film are Michael Moriarty's performances as the brothers, who start out with their own particular mannerisms – Craig plays with his hair when he is nervous, for instance – but quickly pick up on each others quirks, albeit with an apparent difference insofar as Keith consciously imitates Craig whereas Craig seems unawares that he is picking things up from Keith. 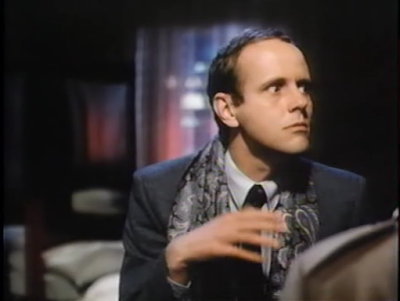 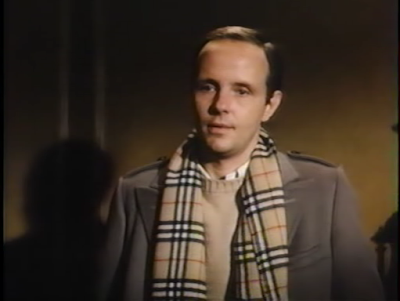 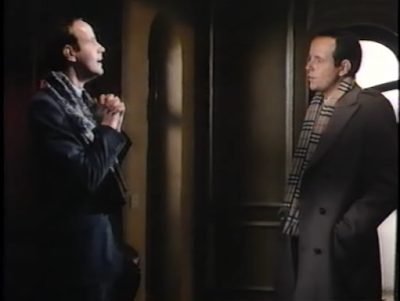 Cameron Mitchell plays an over the hill ex-boxer turned wrestler who has relocated from the US to Germany with his daughter, an old acquaintance of Craig's who has the misfortune to come across Keith first. His performance is also endearingly (sym)pathetic, making for a satisfying contrast with the smug, self-satisfied Max Morlacchi of Blood and Black Lace nearly 20 years earlier. (The use of German locations is explained by the co-production partners on the film being Italian, American and German.) 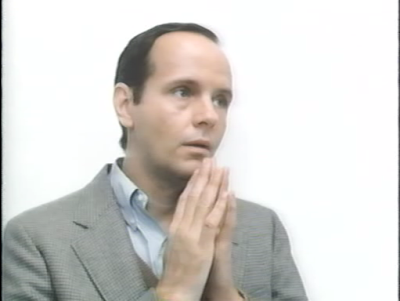 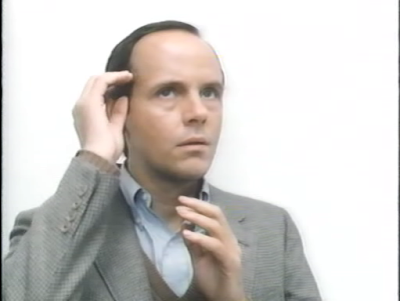 Who am I? Where amI?

The two female leads, Sarah Langenfeld as Mitchell's rightfully concerned daughter, and Penelope Milford, as Dr Warren, likewise deliver more than satisfactory performances, helped by the fact that their roles having more depth to them than many comparable films. Both are active rather than passive characters, going some way towards offsetting the more straightforwardly exploitative 'tits and a scream' aspects of the roles, although their divergent fortunes could be read as telling.

No less than Ennio Morricone delivers a simple but effective score that is by turns romantic and suspenseful while Inferno and Phenomena cinematographer Romano Albani meets all the demands of De Martino's sophisticated mise en scene, producing several layered foreground / background compositions and distorting effects.
Posted by K H Brown at 22:36