Georges Franju's last film needs to be understood in relation to the trying circumstances in which it was made, as outlined by writer and actor Jacques Champreux in the interview included as an extra on the Eureka 'Masters of Cinema' series DVD, where the film is double billed with Judex.

The original plan was for a contemporary remake of Louis Feuillade's Fantômas, one which would be as shocking to 1970s audiences as the original had been to their counterparts in the 1910s and which would thereby serve as antidote / antithesis to the more familiar and comfortable 1960s series starring Jean Marias as the eponymous anti-hero.

A French television station liked the idea and gave Franju a relatively big budget to work with. He then found that securing the rights to the Fantômas character would cost around half this budget. Parallel to this Champreux had been working on a script for a pulp villain inspired by silent era star Lon Chaney Sr, “the man of a thousand faces.” He suggested to Franju that they might use this, with the director agreeing.

The production was then shot in both 16mm and 35mm versions, for television and cinema respectively, in Belgrade. When the footage was sent back to the laboratory in Paris for processing – suggesting that Franju was working without rushes, giving an indicator of his talent but perhaps also why his approach might lead him to encounter problems a routine journeyman would not have – it was discovered that someone had stolen the 35mm material en route. 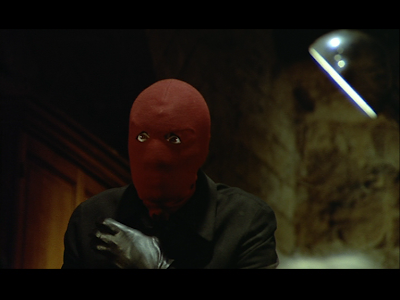 If the salvage job nature of Shadowman / Nuits Rouges has the serendipitous effect of bringing it that bit closer to the surreal strangeness of its model in certain ways – Feuillade famously writing characters into or out of his stories from episode to episode depending on the actors' availability and other chance factors – the downside is that it weakens the extent to which it presents an actual serial-like narrative with a regular roller-coaster ride rhythm. 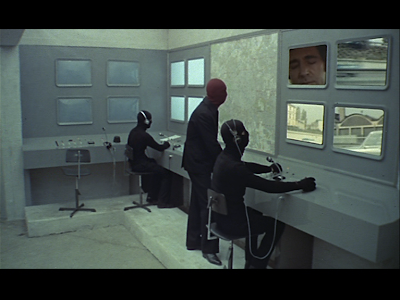 It starts off well, with the introduction of Baron de Borrego and his secret treasure, the wobbliness of the secret panel hiding a wall safe and the rather prop-like nature of the mask endearingly low-tech and providing further hints as to the pastiche / parody nature of the piece. 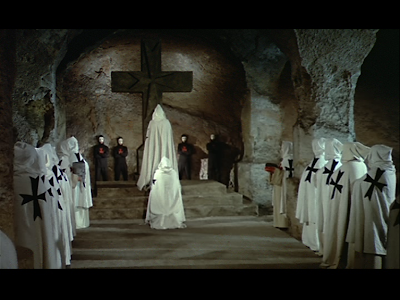 Unfortunately for the Baron his servant is completely untrustworthy and in desperate need of money to pay off his gambling debts and thus sells this information on to the initially sceptical Shadowman. 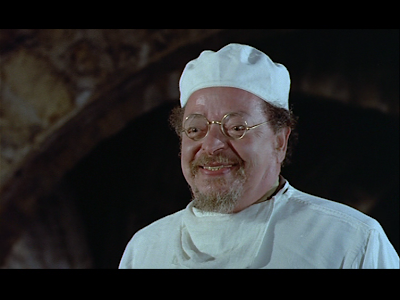 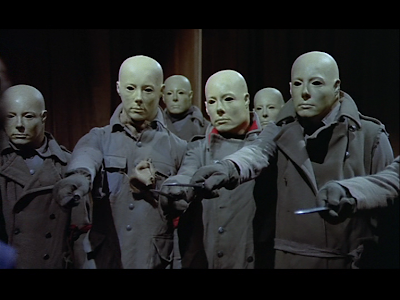 The mad scientist and his auto(n)matons

His secret base and army of minions, including zombie like slaves produced by a mad scientist, are also a delight. Indeed, the latter subplot was my favourite, both for its imagery of the hitherto mannequin-like zombies advancing implacably and inexorably on their targets and the typically Franju-ian politics. After all, the mad scientist only follows capitalist logic to its (il)logical conclusion when he suggests that replacing of the workers with his automata would allow for great cost savings since they don't need paid and can be kept in storage when not needed. 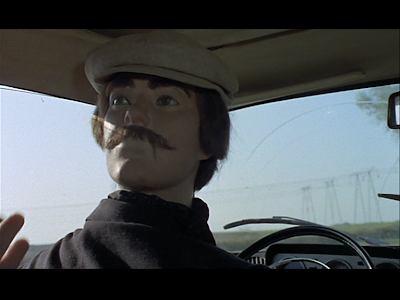 Nor is there any problem with the masked villain's visit to and murder of the Baron, against warnings of dire consequences that he cannot begin to understand.

It's when the Baron's nephew and heir Paul arrives in Paris that things start to go awry. Because we don't know what the master of disguise Shadowman – AKA “the man without a face” – actually looks like we are in no position to know that this Paul is an impostor and while certainly experiencing a shock when this deception is revealed are not placed in a state of suspense beforehand.

Things get worse as we're then subjected to a long and rather tedious expository sequence outlining the backstory of the Templars and their treasures, in which we're also introduced to another unidentified character in the form of the hooded Templar who swears to avenge the Baron. But precisely because he isn't identified, it's hard for us to identify with him. 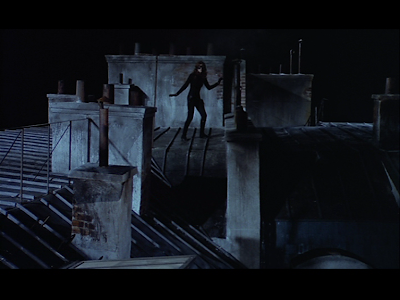 The rooftops of Paris, or a Belgrade studio at least.

Though Nuits Rouges picks up hereafter as it settles into a regular pattern of moves and countermoves by the good guys and the bad guys – again limited by the extent that we know which of these labels to apply any given individual, though the inherently perfunctory nature of the characterisation qua bumbling police inspector, femme fatale etc etc. certainly helps – and a more regular alternation of scenes of suspense and shock, story and spectacle, the momentum is never quite regained.

If it's difficult to recommend Nuits Rouges to the casual viewer who perhaps only knows Franju as the director of Eyes Without a Face, those already committed to his unique cinema will nevertheless find a lot of pleasure in the film.

For us it's very much a case of the more you bring to the film the more you will get out of it: it's about being on same fantastique / surrealist / art-trash wavelength, where one is not only able to identify Gerd Frobe as the titular villain of Goldfinger but also as the nemesis of Dr Mabuse in the 1960s series inaugurated by Franco Lang's The Thousand Eyes of Dr Mabuse, before then going on to that repressed history of pop-modernist European cinema outwith the official canon; while I'll refrain from doing so, true obsessives will also want to seek out the 1919 Feuillade L'Homme sans visage and the 1974 French TV series of the same name, which features all Nuits rouges' leadings players, for comparison purposes.

Equally, however, Nuits Rouges is no lost masterpiece. The televisual origins of the material are apparent in its flat lighting, a far cry from the Eugen Schuftan's sublime cinematography on Eyes Without a Face, whilst the use of irising rather than straight cuts seems as much influenced by the presence of commercial breaks as Feuillade.