[This is another piece written for the writing on film class and thus assumes less background knowledge of the giallo; any comments on whether you could understand it as a typical filmgoer welcome, along with whether it contains spoilers if you've seen / know the film.]

The 1970s were a time of considerable economic, social and political unrest within Italy. One way in which this manifested in the country’s cinema was a resurgence of interest in directly addressing the legacies of fascist and war periods, arguably not seen since the early year of neo-realism immediately after World War II.

Though this interest was manifest across both popular and art cinemas, there were noticeable differences in their approaches. Whereas art films like Bertolucci’s The Conformist and 1900 and Pasolini’s Salo often took a confrontational, less comfortable stance in presenting Italian complicity in Fascist evils, their popular counterparts more usually displaced attention onto Nazism and presented narratives of heroic Italian resistance. 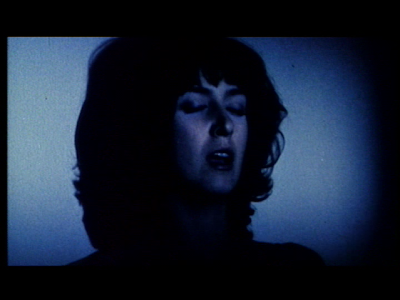 Given this distinction, one of the most intriguing things about Antonio Bido’s The Cat with the Eyes of Jade is the way in which it straddles divide, using the popular form of the murder mystery thriller or giallo to expose a story of collaboration with the Nazis.

It all starts innocently enough as dancer Mara (Paola Tedesco) unwittingly stumbles upon a murder at her local chemists. In a hurry to get to work and reluctant to become involved , she thinks little more of the incident, but is then herself threatened and thus seeks the assistance of her Luca (Corrado) – a move in accord with both the wider giallo preference for amateur investigator protagonists and anti-authoritarian mistrust.

Meanwhile Luca, a recording engineer by profession, has been given a tape of a threatening phone call received by his neighbour, the loan shark Bozzi (Fernando Cerulli). He soon determines that the mixture of noises includes barking Dobermans, marching, shouting and industrial machinery, possibly an incinerator. 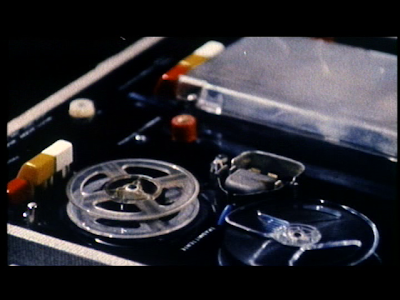 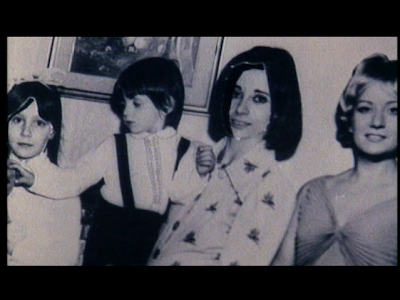 The two cases intersect as an associate of Bozzi’s is murdered and further inquiries uncover that both victims had served on the same jury a year earlier. It was an open and shut case, involving a career criminal by the name of Ferrante (frequent Pasolini collaborator Franco Citti) who had threatened revenge – and who escaped some two months previously.

As so often happens in the giallo what seemed to be a straightforward matter then turns out to be anything but, compelling Luca and Mara to delve ever deeper into the mystery and what one character tellingly dismisses as ancient history, best forgotten about.

There is no getting away from the fact that The Cat with the Eyes of Jade is a derivative film.

Sometimes it seems that just about every image and motif in it can be traced back to one or other of Dario Argento’s films in particular, be it the enigmatic aural and visual fragments that must be deciphered; a traumatic event thought buried in the past but which now murderously erupts into the present; the choreographing of the suspense and violence number set-pieces to propulsive jazz/prog rock freak outs; the enigmatic animal-referencing title itself, or the unsettling proliferation of possible point-of-view shots. 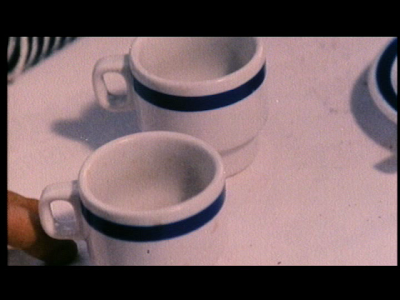 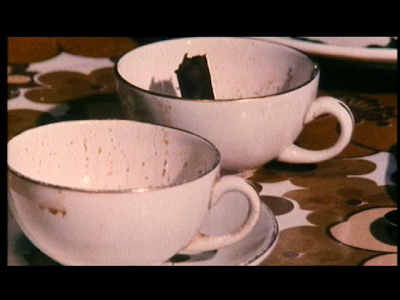 The littlest detail, here the position of two cups, can matter a lot

Yet much like De Palma in relation to Hitchcock, it’s hard to find fault with Bido’s logic here: If you’re going to take another filmmaker as your generic model, doesn’t it make sense to both choose the best available, for obvious reasons, and to make it obvious, forestalling any charges of plagiarism?

Indeed, the one area where Bido’s Argento-isms arguably lead him astray is his use of false point of view. In Argento’s Deep Red, the cumulative effect of such shots is to convey the existence of another inexplicable, irrational, supernatural world shadowing onto this one. The crime that propels the narrative is, after all, a psychic’s recognition of a killer in her audience and precognition that this killer will kill again. Here, by contrast, the world that is unveiled is one which was, alas, all too real.

Yet this also foregrounds one area in which Bido actually goes further than Argento as he takes what was a relatively under-developed subtext in Deep Red and Suspiria and transforms it into a more explicit theme, resulting in a tragic killer-as-victim figure that rivals any in the giallo canon.

Perhaps the greater irony, however, is that a number of facets of the hidden history which constitutes The Cat with the Eyes of Jade’s narrative also emerge when we consider the film’s own mistreatment. Thanks to being released in the USA under the frankly exploitative title Watch Me When I Kill (tagline: “When I go berserk...you're better off dead!”) with the kind of dubbing that makes it all but impossible to fairly evaluate the dialogue and performances, the film was virtually guaranteed to be ignored by the kind of critic who might otherwise have recognised its thematic affinities with the arthouse and have appreciated Bido’s intent.

While I do not wish to claim that The Cat with the Eyes of Jade is a lost masterpiece, I would argue that it is a film that deserves to be rediscovered and re-evaluated in its own terms – broadly speaking those of a European popular cinema aspiring to more than the lowest common denominator – without prejudice. This is what it deserves, not least for being a film which is itself ultimately about the dangers of forgetting the past and of responding to the unfamiliar through easy stereotypical formulations.
Posted by K H Brown at 18:13