There used to be an advert on British television for a wood sealant, in which a no-nonsense guy would do a no-nonsense spiel for the product, that it does exactly what it says on the tin.

For some reason this phrase came to mind when watching this unimaginatively titled sequel to Killer Crocodile: Yes, there's another crocodile and, yes, it kills and eats people. 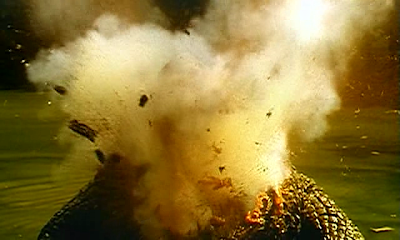 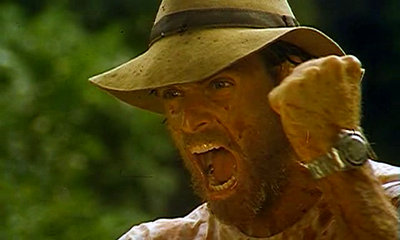 The sequel label perhaps isn't entirely applicable, however, inasmuch as the film was shot at the same time as its predecessor, suggesting that producer Fabrizio De Angelis either saw the first film as immediately demanding a sequel or that there was no real financial risk involved in doing one anyway given they were already on location and had the crocodile. 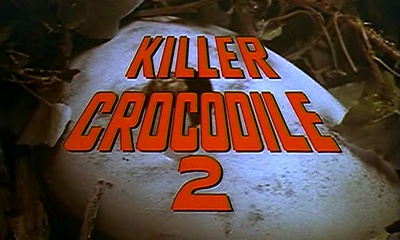 But whereas De Angelis's earlier Zombie Holocaust merely reused locations from Zombie, to which it represented a hasty cash-in, Killer Crocodile 2 also incorporates some of the same actual footage as its predecessor.

Indeed, the dramatic destruction of the previous killer crocodile via its enforced consumption of a spinning outboard motor (shades of Zombie Holocaust's zombie beach death meets Jaws) is later played back once more as a flashback within the context of the unfolding new narrative.

Besides the crocodile munching on anyone who crosses its path, said narrative also involves some barrels of radioactive waste which have gone missing – curiously never presented as having any direct relationship with the unnatural size of the killer crocodiles – an investigative journalist and a ruthless property developer determined nothing will stand in the way of his plans for a new tourist resort.

If the last aspect recalls Sergio Martino's Big Alligator River along with the self-interested business and political types in Jaws, Tentacles and so on, one way in which Killer Crocodile 2 differs is in the absence of anyone foretelling doom if action is not taken.

Indeed, despite the crocodile first chowing down on one of a pair of windsurfers and then on assorted nuns and schoolchildren, everyone except the first film's crocodile hunter seems oblivious to its existence.

This gives the film a curious lack of resolution as the main bad guy isn't punished and it's entirely possible that, unless there is another crocodile out there – a sequel too many as it proved – the main obstacles to their development, namely the crocodile and the missing waste, are no longer issues. 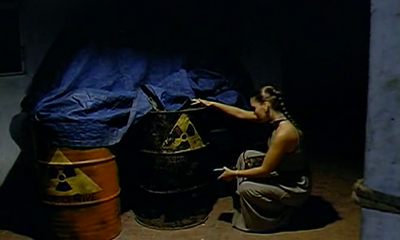 The investigative reporter, meanwhile, perhaps has her ultimate origin in Zombie, although by virtue of her gender is more immediately prefigured by Sherry Buchanan's character in Zombie Holocaust, although tougher and no where near as much of a bitch whom you want to see die slowly and painfully. 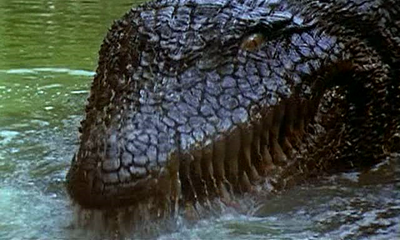 Nonetheless, in the end the person who you feel most sympathy for is special effects man turned director Giannetto De Rossi. While certainly limited by constraints of budget and time, his work on both the crocodile and at helming the film is decent, particularly giving the logistical demands of working on location and in the water for much of the film. Unfortunately by 1990 the game was more or less up for the Italian popular cinema...

A slumming or desperate for work Riz Ortolani provides the score, complete with inevitable Jaws-styled crocodile attack theme alongside some of his distinctive syrupy to sickly strings.
Posted by K H Brown at 23:29