As a late, cheap and derivative entry in the original slasher film cycle, the essential challenge that Slaughter High presents the reviewer with is that of saying something original.

The opening gambit is itself a cliché: The traumatic scene in the past, on a significant calendar date, as class nerd Marty Rantzen (Simon Scuddamore) is horribly disfigured by his jock and cheerleader classmates when one of their April Fool's Day pranks goes wrong. (Haven't these kids seen Pranks or Terror Train?) 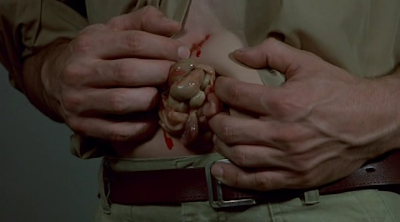 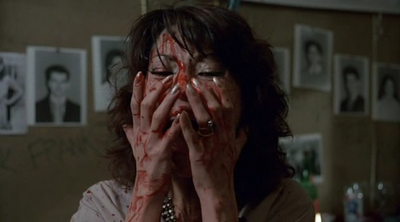 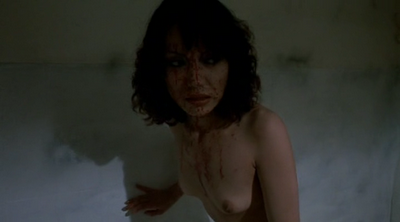 One of the cheerleaders, Carol (Caroline Munro), then wakes up from this scene just as she is pleading Marty for forgiveness.

It's a spark of inspiration, useful for situating her as a probable final girl alongside placing the film's oft-criticised shock ending within a wider narrative context.

In this we again see the film playing to its strengths, or at least doing what it can to acknowledge and neutralise its weaknesses:

The filmmakers seem to be saying that, yes, they know that their cast are way too old to be playing high-schoolers, and are thus now keen to move things on to their late twenty-something present.

Then there's that Randall was the film's co-producer, got his start in nudie films, and has his office walls lined with posters for the trashy likes of Pieces and Supersonic Man.

Then there's that Munro's shower scene, which allows for the obligatory nod to Psycho and some early use of the stalker cam, is itself devoid of nudity.

Randall and his frequent co-production partner at the time, Steve Minasian, obviously weren't paying her enough for that. (Anyone wanting a giallo/slasher/trash triple threat triptych could do a lot worse than watch this film, Pieces and the Santa Claus slasher Don't Open Till Christmas.)

This said, we have already had some full frontal male nudity courtesy of Simon Scuddamore as Marty. Likewise, before the hour and a half is out we will get also get some exposed breasts courtesy of a couple of the female no-names later on.

As Carol and the others arrive at the now-abandoned high school someone watches them from inside.

With a storm erupting outside, they decide to break into the building to take shelter and have a look around. 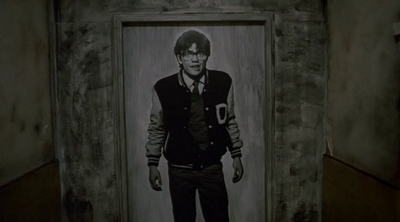 Marty as he was - bad hair, glasses, desperate to be one of the cool kids 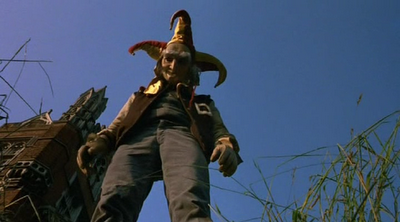 Marty as he is, with jester's cap, mask and psychosis

One of the jocks jumps out wearing a hockey mask, a la Jason (Minasian was involved with the Friday the 13th series, as was composer Harry Manfredini, who contributes a rather sound-alike score) while someone else makes comments about Halloween.

Again, no sense in pretending that you're original seems to be the message.

The group find a copy of their yearbook and are thus reminded about Marty. They never worry about the fact that no-one else from their year has shown up, but that's pretty much par for the course. After all, the now abandoned school also still has a caretaker on its grounds, or rather had – as he's Marty's first victim, being impaled on a coat hook. Again the inconsistent logic – why does the revenge seeking nerd kill someone who didn't do anything to him – doesn't really matter.

The next to die is one of the group, a jock who drinks some acid-spiked beer and promptly suffers from an exploding chest, Alien style. 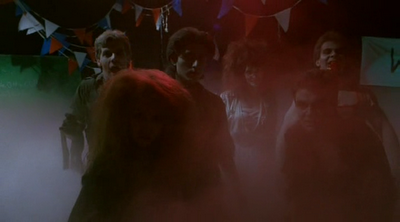 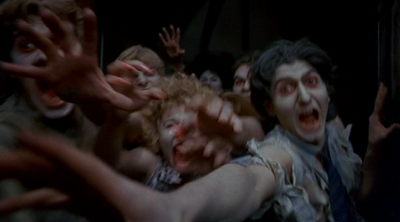 Maniac Meets Dawn of the Dead?

While one of the girls goes to have a bath – cue beginnings of idiot plot wanderings around in the dark, getting picked off one-by-one – the others look for a way out. They find they have been locked in. One of the guys manages to get out and to his car, but is then speared from behind by Marty, following which he tops up the bath with acid...

By now we're forty or so minutes in, with an equal number to go and can pretty much predict the shocks and splatter and so forth by the clock: Couple go off to have sex, get electrocuted via metal bed frame; guy goes off to try to fix car, gets a rotor blade to the chest, etc., etc., until the slightly more extended final showdown (most quotable line: “April Fucking Fool, You Motherfuckers!”) and sequel-raising coda.

It was not to be, however, with Scuddamore committing suicide shortly after the film's completion. One very much hopes that it had no bearings upon his actions.

Though US-set the film was clearly made in the UK, with some of the accents veering from one side of the Atlantic to the other. The effects are satisfactory given the era and budget. While the cinematography is perhaps a bit dark in places, this adds atmosphere. The stalker cam work is plentiful and pretty decent, while the direction as a whole is better than might be thought considering that three men are credited with it. Certainly the production values as a whole are at least those of a 'proper' movie, unlike, say, Michael J Murphy's Last Night.
Posted by K H Brown at 22:44

You forgot to mention the most ridiculous point - it is never explained what April Fool's day has to do with anything and the whole "surviving until midday" thing is a tradition that only exists in the UK (or at least not in the US), so the plot really doesn't make a lot of sense if the "US setting" is taken at face value.

I guess this indicates how involved Dick Randall was in the whole project.

At least with Duck You Sucker - which Leone was convinced was a common US phrase - he was in a position where no one could tell him otherwise.

"Surviving until midday" is not a British tradition. It was invented for the film.

In the very begining of movie, before they pull the prank on Marty, the calander shows its april 1st and after they prank marty in locker room, they say, "april fools" so that answers that