Although I had seen The Flower with the Petals of Steel before, it was only via a rather fuzzy bootleg video copy. As such, I hadn't felt comfortable about discussing it until now, when the opportunity to see the film via a considerably better looking Italian television sourced rip emerged courtesy of Cinemageddon.

As it turns out, my feelings about Gianfranco Piccioli's giallo remain much the same. 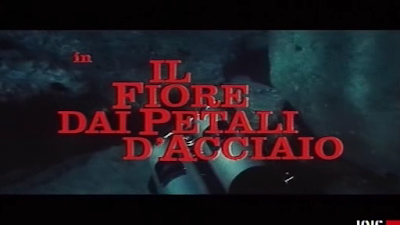 Visually many of the scenes are still dark, though it is a film with a lot of skulking around at night. Aurally Marcello Giombini's score, while at least distinctive from the dominant Morricone/Nicolai idiom of the time by virtue of following his own style, still seems that bit out of place.

It has a decent cast, headed by Gianni Garko and Carroll Baker; some nice production design – especially the titular sculpture and a broken doll scene – along with plenty of early 70s fashions; some nudity – the ever-game Baker in the shower, plus more from Paola Senatore and Pilar Velazques – and, to top it all of, prominent J&B placement and use. 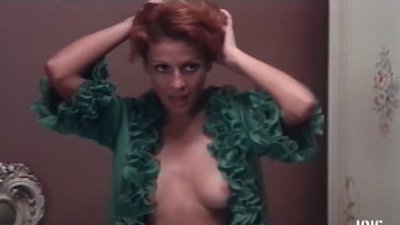 There's plenty of this sort of thing from Senatore and Velazques, a bit less from Baker

In the main the film can perhaps best be compared to Four Flies on Grey Velvet, in that it's a study of a guilty protagonist and places suspense over surprise.

The obvious difference is in what happens immediately after the pivotal death upon which the narrative rests:

In Four Flies' Roberto Tobias flees the theatre after accidentally stabbing the man who has been following him and causing his fall into the orchestra pit.

Doctor Andreas Valenti (Garko) here is not in a position to flee, the accidental impalement of his lover Daniela (Senatore) onto the sharp metal flower sculpture occurring in his own home. 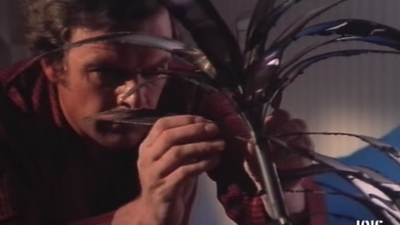 An accident waiting to happen

Valenti's immediate provides for one of the film's more shocking sequences, as he calmly dismembers Daniela's body, bags up the pieces and drives off to dispose of them in a grinder.

But these actions also make sense, as we later learn that his ex-wife – whom he inherited a considerable sum from – was committed to an asylum shortly after their marriage, vanished from the institution, and has not been seen since. 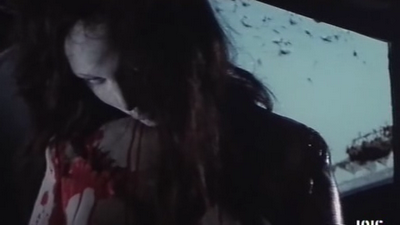 Still, no body equals no crime – but for a few complications:

Someone saw Valenti in the act and soon starts sending him the evidence to prove it.

Another ex-lover, Evelyn (Baker), who is presently in a relationship with Daniela, wonders where she is, especially since her car is still parked outside Valenti's house, and duly involves the police...

This narrative is bookended by two underwater sequences, with the opening one remaining absolutely detached from the main narrative and remaining unanswered until the end. This in itself isn't necessarily a problem, if one thinks of the similar fragments in, say, Rabid Dogs, but there the beginning, middle and end at least cohere into one film. Here, by contrast, the linkage between the parts just feels arbitrary and strains credibility, even by the already tolerant standards of the filone.
Posted by K H Brown at 12:47