Turkish popular cinema is a weird thing. Whereas Italian filmmakers would emulate Hollywood product with a clear eye towards international sales, their Turkish counterparts appear to only care about the domestic market. Besides the extensive appropriation of musical cues and footage that would have likely incurred legal action, the area where this is most apparent is the importance of religion within them. Sometimes this works, as with 'The Turkish Exorcist', where the source film already has a strong religious component, such that a commutation from one faith, Christianity, to another, Islam, is all that's needed. Sometimes, as with 'Turkish Star Wars' AKA the Man who Saved the World, it leads to something bizarre.

Kartal Yuvasi is basically Straw Dogs, transposed to 1970s Cyprus. Anyone who has seen Sam Peckinpah's film will immediately recognise strong similarities between the two films, along with areas of divergence.

The main curveball thrown, however, is that Murat is not the protagonist of the film, with that role instead being taken by his mother, a character with no counterpart in Straw Dogs.

This in turn relates to the film's specific politics, in which the cultural clash between the teetotal Turkish Muslim Cypriots (hooray!) and the drunken Greek Christian Cypriots (boo!) is to the fore. The latter, you see, have forced almost all of the former out and soon have designs upon Mary, who is presented as a likely convert to Islam.

This propagandistic aspect makes the film harder to enjoy than the likes of Turkish Star Wars, in that it's almost as techically inept but also more difficult to laugh at or off.

The final scenes of the film are the most awkward in this regard, juxtaposing the mother's defence of the house against the Greeks with library footage of the Turkish military in action. 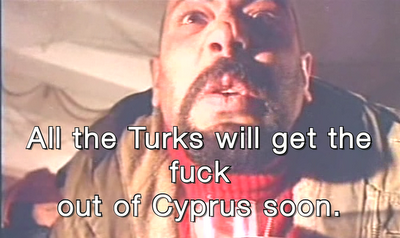 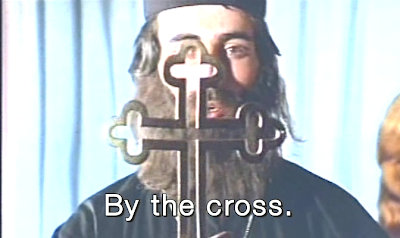 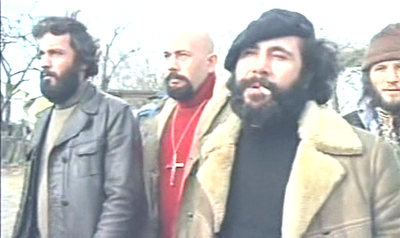 In the end it's questionable whether the film is really Straw Dogs Turkish style or The Eternal Jew Turkish style (the village idiot character is called Moses).
Posted by K H Brown at 02:21