One of the things about watching lots of Italian genre films from the late 50s through 80s is that you get used to certain names cropping up, like wig makers Rocchetti and Carboni or CSC graduate Carla Mancini.

This, by contrast, is one of those films where most of the names in the credits don’t mean much – including director Guiseppe Veggezzi / Joseph Vegh whose sole IMDB credit this is.

The two important names in the cast are Christopher Lee and Giorgio Ardisson, the former spelled as Cristopher in the credits and the latter’s forename Anglicised to George.

The film opens at an airport and looks like it’s going to be a crime thriller as two hitmen prepare to go into action against Carlo, for his refusal to hand over some documents.

Although wounded, Carlo escapes – it isn’t completely clear how – to a monastery where he asks to see one of the order, Pejo, an old friend. Carlo explains he hasn’t got the documents because Alma took them.

We then cut to a nightclub and are presented with a succession of song and dance numbers. Their relationship to the previous scenes only becomes evident when Pejo goes to visit Alma, a dancer at the club, backstage. Alma is reluctant to give up the documents – at least not for a considerable sum of money.

Pejo then recounts the story of how he became a monk – we’re now 20 minutes into the 75 minute film – and we segue into an extended flashback.

He and the rest of the gang – including the particularly out of control Ugo, played by Ardisson – were out looking for kicks, entailing forcing other cars off the road and then beating the occupant of one such vehicle after he has crashed.

At this point Lee makes his appearance as the old man of the house and talks about his dead beloved and sold his soul to the Devil in order to bring her back. He hears her voice, but can never find her, and thus offers the gang all the riches in the castle if they can find her for him. After they have gone, the clock chimes midnight and the man is either replaced by or transforms into the Devil himself.

Round about this point the gang, who have gone in search of the treasure, start to feel a little less brave, and we get some reasonably decent Gothic/Fantastique atmospheres along with the woman making her appearance, leading the gang onto a seemingly endless spiral staircase ending in a crystal/mirror image filled room, traps each of them such that they can see the others but not reach or touch them.

The existential dread of the scene is effectively conveyed, recalling the likes of Sam Dalmas’s entrapment in the gallery sequence of The Bird with the Crystal Plumage; the infinite plane that Liza and John find themselves in at the end of The Beyond; Eswai’s pursuit of himself in Kill Baby Kill and – perhaps ultimately most revealing – the doubled characters in Nude for Satan.

Having been trapped for a while and now on their last legs, the gang follow one of the spiders inhabiting the place to find an equally long descending staircase that in turn leads onto a long passage. They have only just entered it, however, when they fall into a pit and encounter the Devil and/or the old man again. Suitably chastened and transformed by their experiences, they flee the castle.

At this point we cut back to the framing narrative as Pejo provides the moral of the story before, back in the past, the lady of the castle appears to them once more, coming out of a clock in a somewhat Rollin-esque manner. At this point we cut back to the framing narrative as Pejo provides the moral of the story before, back in the past, the lady of the castle appears to them once more, coming out of a clock in a somewhat Rollin-esque manner. They take her out of the castle, into the light, and give her a proper burial. Significantly here we’re given a semi-subjective shot from inside the grave, looking up to the heavens. 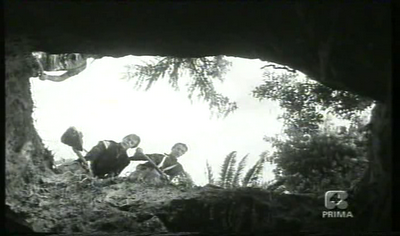 As the contrite gang members pass the man they had earlier beaten, they tend to his injuries. “Strangely, his face resembled the old man from the castle.”

Alma, reduced to tears by Pejo’s tale, gives him the documents; that her name means soul hardly seems coincidental insofar as she too has been saved.

While this can in no way be considered a good film, it is certainly an interesting one for its combination of the inept and the poetic, or that “sublime” which Ado Kyrou famously identified as a reason for watching bad films.

Thanks must again go out to the badfilm community for recording this obscurity off Italian TV;  converting it to an AVI and torrent, and providing fansubs.
Posted by K H Brown at 23:37

Super obscure. I've read about this on IMDB. Wouldn't know where to find it except Italian TV.

These captchas are getting ridiculous.

If you're not I still have some invites ;-)

Would love to see this movie as well, so if you still have a spare invite for cinemageddon, please send it to kryptos973281@googlemail.com