This new book from Glittering Images by Antonio Bruschini and Stefano Piselli is somewhat reminiscent of Adrian Luther-Smith’s Blood and Black Lace in that it could be considered something of a viewer’s guide to the form. But while there are necessarily overlaps between the two books, they complement one another, such that the genre fan could do with having both on his or her bookshelf. 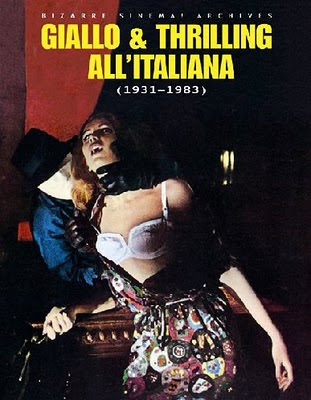 The book has four sections: An introductory overview, a filmography, a recent interview with Dario Argento, and a bibliography.

The interview and introduction don’t say anything particularly new, though in the latter case this is because there is only so much that can be said with the same basic facts. To wit: The literary giallo dates back to 1929 and the first publications by Mondadori. The giallo film, in the form we normally understand it, emerged 30 years later, with Mario Bava’s The Girl Who Knew Too Much and Blood and Black Lace. The form then reached its height of popularity in the early 1970s with Dario Argento’s The Bird with the Crystal Plumage and its successors.

The filmography section is the largest. Whereas Luther-Smith’s book is organised by title – a structure that sometimes causes difficulties with AKA titles – Giallo & Thrilling All’Italiana is arranged chronologically.

Films from the 1930s through to the 1950s are only given credits, likely reflecting difficulties in actually accessing them. Films from the 1960s onwards are also given a review/overview, ranging in length from a sentence to a paragraph, and two ratings, the first pertaining to the overall quality of the film as a giallo and the second to its sexy / kinky value.

The reader will likely disagree with some of the authors’ ratings, although they seem mostly fair and consistent. Blood and Black Lace, The Bird with the Crystal Plumage, Deep Red and The House with the Windows that Laughed are among the five-star films, What Have You Done to Solange, Don't Torture a Duckling and Who Saw Her Die the four-star films.

On balance, Luther-Smith’s book is probably the better one for those new to the giallo on account of featuring somewhat longer and more detailed discussions of the core group of films (those by Bava, Argento, Martino, Lenzi, Fulci etc.) with both synopsis and review and being originally written in English rather than translated, sometimes awkwardly, from the Italian.

Giallo & Thrilling All’Italiana, however, is probably the better for those venturing further afield, particularly into earlier, minor and crossover releases.

To give but one example, there is nothing about the 1960 film Chiamate 22-22 tenente Sheridan (the big-screen version of a then popular Italian TV detective series set in San Francisco) in Luther-Smith’s book.

The book is also superior when it comes to its bibliography, in that this includes giallo novels adapted for the screen along with fumetti and cineromanzi derived from films. (I had never realised before that Fernando Di Leo’s The Boys Who Killed and Duccio Tessari’s Death Occurred Last Night are adaptations of Giorgio Scerbanenco novels and feature the same detective character.)

Disappointingly the interior illustrations are only in monochrome. They are also somewhat awkwardly placed, usually with a gap of a few pages between the text and the images related to it. For instance, Bloody Pit of Horror is discussed on page 26 but the stills from it do not appear until page 32.
Posted by K H Brown at 17:18

Did you order the book directly from the publisher or is there another way to obtain it? Glittering Images doesn't accept paypal if I'm correct...

I ordered the book from bloodbuster.com