Though not to be confused with Paul Schrader’s 1979 film of the same name, this 1977 British oddity is worth comparing to its US counterpart for the way doing so highlights the differences in attitude and approach between the films and the two countries here. 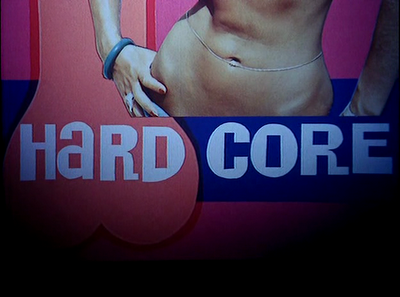 In 1970s Britain, meanwhile, there was no real stigma attached to the X certificate – Schrader’s Hardcore was released as an X – but an almost absolute proscription on the production and distribution of hardcore material.

This puts James Kenelm Clarke’s vehicle for Fiona Richmond, one of the pre-eminent British sex stars of the time, in a curious position: It could use the title Hardcore, but not present Richmond or anyone else in anything beyond softcore footage.

Indeed, it’s approximately 23 minutes in before we get any full frontal (female) nudity, in a scene which also allows for the incorporation of some obligatory pseudo-lesbian frolics. 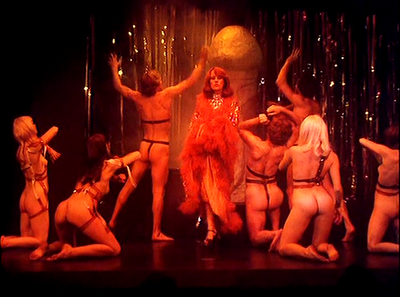 If this non-hardcore approach implies a bait and switch it is one that the filmmakers seem to have anticipated. Within the film within the film Richmond is repeatedly asked by a documentary filmmaker to explain, to define, what hardcore is. She never does so, thus neatly sidestepping any truth-in-advertising issues. Must be some other hardcore you, the desperate, lonely, dirty-Mac wearing cliché, were thinking of and looking for. (Doubtless, however, many in this target audience also knew just where to get ‘the real thing’ denied them here.)

While today Britain is more liberal in some ways, in others things have moved in the other direction. I doubt that if the film were to be made today it would include a family album type shot of a pre-pubescent topless Richmond for fear of attracting the paedophile demographic. An episode in which a supposedly teenage Richmond has sex with her teacher would likewise likely be unacceptable for similar reasons; certainly it could not be played for laughs. 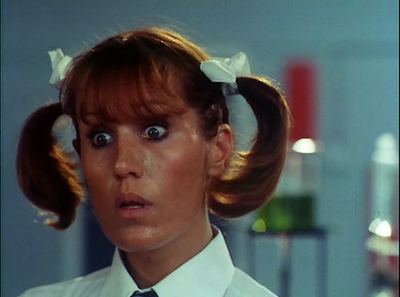 The past, as they say, is a different country.

Yet, to trot out another cliché, the more things change the more they stay the same.

Witness another episode in which Richmond appears on a television programme to debate the subjects of sex and censorship with the obligatory Mary Whitehouse stand-in, here named Norma Blackhurst.

Richmond – or her scriptwriters – first draw a comparison between appetites for sex and food, thus attempting to naturalise what the puritanical Blackhurst denies as unnatural.

They then manage to draw Blackhurst into using the kind of ‘foul’ language that she had asserted never to use, leading to dialogue that is as much bleeps as actual words. 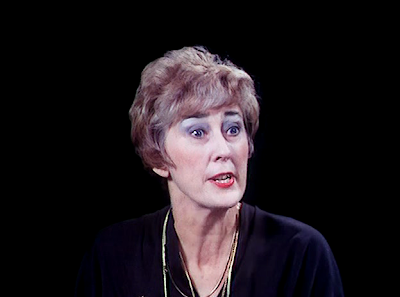 The impartial presenter – whom Richmond later has sex with, alongside less well-known, actual hardcore starlet Heather Deeley – contributes to the debate by attacking that familiar chink in the pro-censorship campaigner’s armour, their knowing something is wrong without actually reading, looking at or listening to it: “How can you pass fair comment if you’ve only glanced at it?”

Today the denial of the Whitehouse types – take a bow the renamed National Viewers and Listeners Assocation, Mediawatch – remains the same, even if the TV station would no longer bother bleeping the words, instead just prefacing the program with a strong language warning. But this kind of thing inevitably doesn’t satisfy the Mediawatch bluenoses. (I refrain from linking to Mediawatch for the obvious reason. Why link to an enemy?)

If the filmmakers critique here was to be expected, what was perhaps less predictable were the way in which the film deals with the softcore magazine for which Richmond worked and which was published by her partner, Paul Raymond. (Raymond was, by most accounts, also a silent partner on this film.) 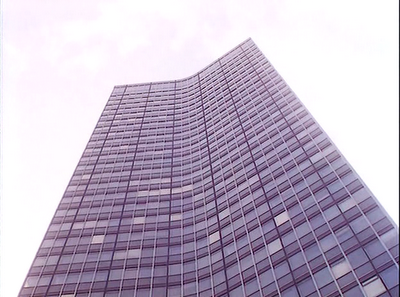 Raymond Towers? (Phallic double entendre intentional, given much of the film's dialogue)

Men Only’s editor is presented in less than flattering terms, while the other staffer we see as a lecherous Dick Randall alike who is always groping the models’ breasts. When Richmond, who works for the magazine both here and in real life, suggests the possibility of a feature that would involve her screwing in a balloon over the Alps, the idea goes down like a lead zeppelin: “Have you thought of the cost?!”

Of course such self-critique remains at a base level: You admit that what you are doing is shit, but keep on doing it as long as someone is willing to pay for this selfsame shit.

There’s not much to be said about James Kenelm Clarke’s direction, other than that is better than might be expected: Functional and efficient, it’s not shit.

His music is another matter entirely. The man, who worked as James Clarke in the Library Music scene of the time, proves to have some serious grooves going on. (Hardcore’s music has been released on CD, along with that for Expose and Let’s Get Laid, both also starring Richmond.)
Posted by K H Brown at 17:21