This is one of those films that’s bad in almost every way – the exceptions being Gerard Schurmann’s beautiful score and the nice animated titles – but which is nevertheless so endearing that it’s certain to win over all but the most hard-hearted viewer.

Made under the auspices of Herman Cohen under the working title of I Was a Teenage Gorilla, the plot sees the famous scientist Dr Decker return unexpectedly from Africa a year after his plane went down, equipped with a new way of growing plants and animals to giant size and accompanied by a chimpanzee, Konga.

Note the discrepancy: We have an original title referring to a Gorilla but that Konga – who may have been a teenager in ape years for all I know – is a chimpanzee. It’s a discrepancy that can be explained away on the grounds that, first, a gorilla would have been rather more difficult to control on set and, second, that gorilla suits are easier to come by than chimpanzee ones. 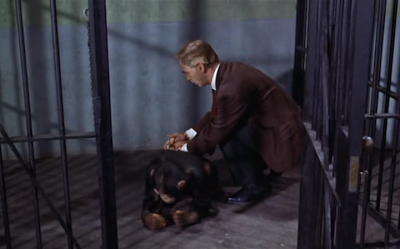 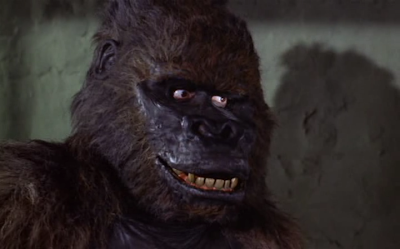 Indeed, one of Cohen’s earlier ventures was Bela Lugosi Meets a Brooklyn Gorilla, whose man in the ape suit, Steve Calvert, actually made a career out of such roles, also appearing in The Bride of the Gorilla and The Bride and the Beast amongst others.

Another gorilla man, George Barrows, would later appear in Cohen’s follow-up to Konga, Black Zoo. Apparently Cohen here hired one of Barrows’ gorilla suits, which was then donned by another actor, Paul Stockman. The suit got damaged, encouraging Barrows to make sure that he was hired to wear it next time round.

Anyway, Decker is welcomed back by his assistant Margaret. Unfortunately he’s not as in love with her as she is with him and instead prefers co-ed Sandra Banks, who already has a boyfriend. This rivalry, along with an academic one featuring the dean of the college, is of course nothing a trained chimpanzee grown to giant gorilla size can’t deal with...

Besides Konga’s eventual suitmation rampage through the streets of London, tearing down buildings as if they were made of cardboard – probably because they were – and throwing people around as if they were dolls – probably because they are – other highlights include some decidedly phallic and vaginal carnivorous plants and an unfortunate cat whom the doctor is forced to shoot before it turns into a tiger after it drinks some of his miracle-grow formula. 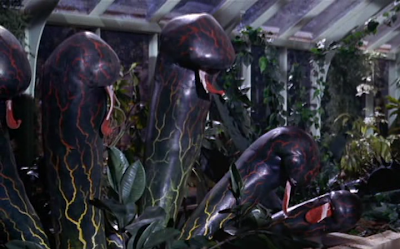 Some of the plants... 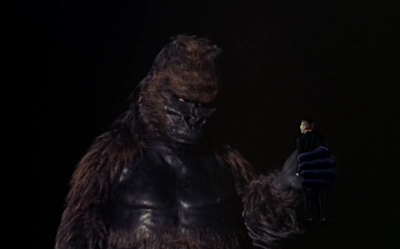 Konga and a puny human

Though he was something of the go to man for any British horror film which couldn’t secure the services of Christopher Lee or Peter Cushing, Michael Gough, who plays Decker, also had his own distinct approach to the material. Whereas Lee would voice his derision at bad parts and dialogue and whereas Cushing approached each and every role with the same seriousness, believing that if he couldn’t take it seriously his audience would not, Gough always seemed to enjoy hamming things up, a bit like a British Vincent Prince, and Invariably playing the same smug, superior, self-satisfied and shouty character each time.

I wondered if the Decker name is a reference to Dr Cyclops’s Albert Dekker, especially since that film also sees its mad scientist experiment with size alteration, albeit miniaturisation.
Posted by K H Brown at 18:26

Contains perhaps one of the greaest ever lines of dialogue: