Downtrodden, diffident and slightly disabled, middle-aged accountant Renzo Dominici (Franco Nero) is always the last to leave the bank where he works at night. Everyone else thinks it is just foolish dedication, with no-one suspecting that he is in fact a considerably younger man who keeps in shape and is just waiting for the right moment to rob the place before making off for a new life in the sun. 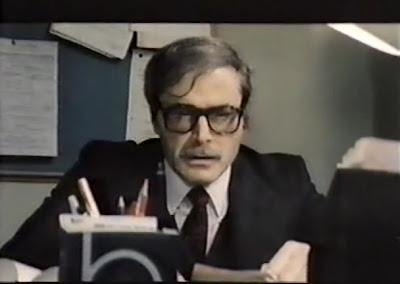 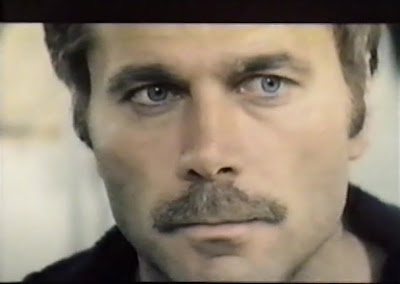 With an unusually large amount of money being kept over the holiday weekend, that time has come.

While the robbery itself goes largely as Renzo had planned, as does his attempt to manufacture the perfect alibi by way of being elsewhere as his unrecognisable blue eyed alter-ego holds up the place and deliberately flashes his distinctive blue eyes to mislead his co-workers, he also drops a cigarette lighter and forgets that his cufflinks are visible. 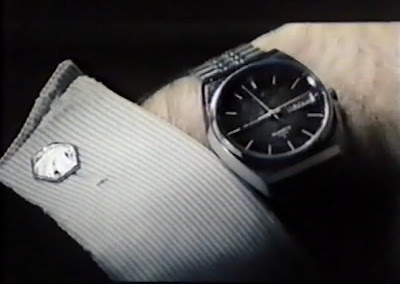 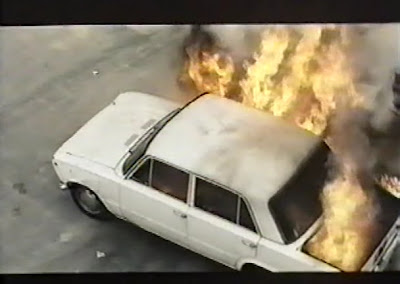 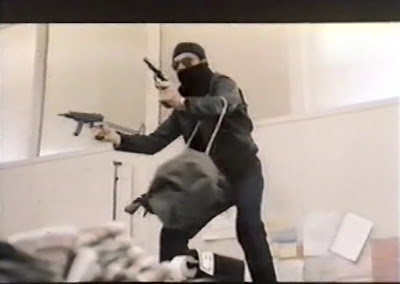 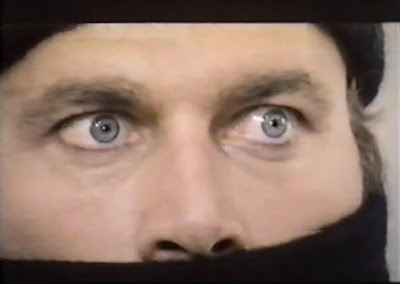 ... leave them something to remember you by... 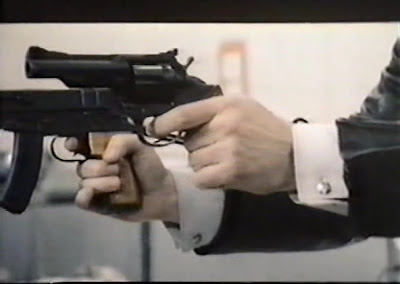 These little details lead the office canteen’s borderline nymphomaniac pastry chef Stella (Dalila Di Lazarro) and a grasping security guard to suspect that something is not quite right about their colleague, while elsewhere gay hustler and petty thief Ricky develops certain suspicions that the blue eyed man who frequents the Turkish baths where he works might be the bandit... 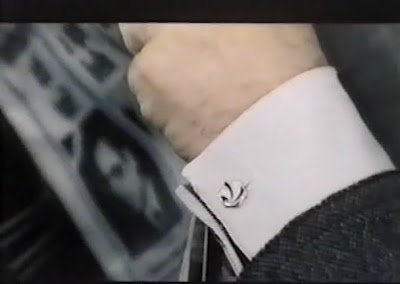 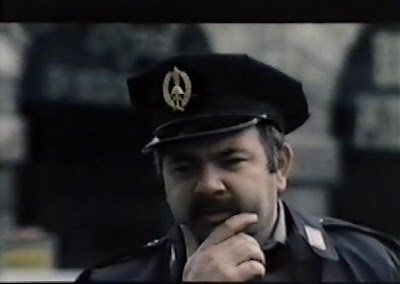 Where have I seen those cufflinks before?

The Blue Eyed Bandit's writer-director Alfredo Giannetti was primarily known for his work in the latter capacity – he had earlier won an Oscar for his contribution to Pietro Germi's Divorce Italian Style - with a certain lack of visual style evident in his approach.

While good at building character and place through an attention to little details, the more attentive viewer may also feel slightly let down by the way in which he later returns to some of these selfsame details with that excessive obviousness that denies the value of paying attention.
Here we can note, for example, that the distinctive cufflink worn by Nero qua Renzo are casually introduced as a seemingly non-signifying detail within a cutaway as he checks his watch before the robbery to later be similarly indicentally visible during it and thus later to become the object of meaningful close-up and zoom-in as the security guard notices Renzo wearing them.

Such misgivings aside, however, Giannetti's approach works insofar as it gives Nero plenty of scope to develop his character(s) and generally showcase his acting abilities – watching the opening scenes prior to the revelation that it is Nero in the role you could be forgiving for thinking that Enrico Maria Salerno is making an uncredited appearance as Renzo – without succumbing to obvious grandstanding or schticks. When he takes out the insole that makes him limp and the brown-eyed contact lenses concealed behind Renzo's thick, heavy spectacles you can easily believe that he had been wearing these props for the past several hours to help him get into the part.

One does also wonder, however, if more might have been made of the homosexual subtext to the character and whether this might have strengthened the whole. There's the hint of something about the character's double life, the way he visits the sauna as himself, yet runs from Ricky's pick-up attempt without really articulating why when combined with his heartfelt voice-off to his senile mother, whom he regularly visits incognito at a nursing home – “Why don't you die so I can live my life the way I want to”– that feels a bit, well, queer, but also the sense of a reluctance on someone's part to really push this angle. 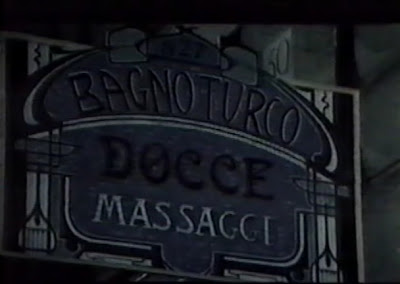 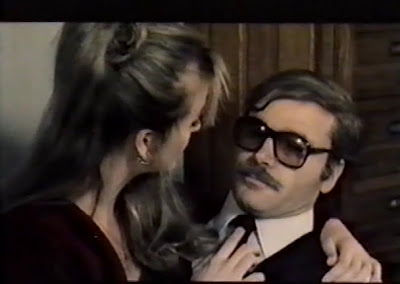 Could there be another reason why Renzo is uncomfortable with Stella's attentions?

This said, one could well imagine that to make the character overtly homosexual would have made him less sympathetic for mainstream audiences in 1980 were concerned, too much attention here easily leading to jokes about the Blue Eyed Arse Bandit to the detriment of everything else.

As it is all concerned have done all they can to make us root for Renzo, whether presenting everyone else as just as bad or worse, his avoidance of violence except as a last resort – this must be one of the few Italian crime films of the period where rapine doesn't degenerate into shooting – or just because we want to see the archetypal little man win one over the system.

Ennio Morricone's uncharacteristic soundtrack, with its jazz shuffle and waltz themes, sightly reminiscent of a big(ger) band version of Take Five, is quirky but reasonably effective – a description that might, on reflection, apply to The Blue Eyed Bandit as a whole...

I watched the film via the Dutch subtitled, English dubbed VHS; there was a torrent of the film in circulation a few months ago.
Posted by K H Brown at 22:02

Interesting review - haven't seen the film as yet but would like to, as a Nero fan. The trailer on YouTube does make a point of Renzo's disquiet around Dalila Di Lazzaro's character...though the casual observer might think he's just uncomfortable with her being so upfront about things!