A man with the unlikely name of Mr Shamrock goes into a hotel, orders a J&B (by name) and looks around, noticing a woman with a distinctive pin. Before you can say “handkerchief code”, he's picked her up and they're off to his room for some satantic themed sex games, she wearing nothing but a nun's wimple and he a devil's outfit, complete with pitchfork – although it doesn't stay on for long, disappearing as if by magic as he goes down on her. 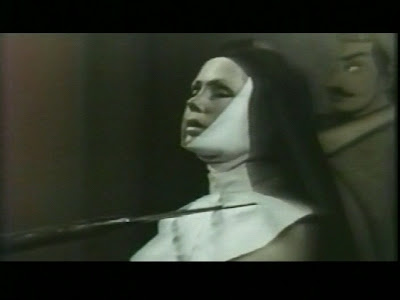 Who says nuns have no fun? 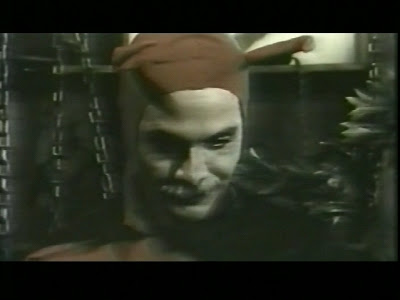 Lanzieri advises Cortesi to go to the police but, wary of his indiscretions being made public, Cortesi is in favour of paying up this time. Lanzieri telephones Luisa to let her know her husband's decision and, for reasons of her own, sneaks away with blackmail photos and letter and goes to the police.

Luisa tells Inspector De Sanctis (Antony Steffen) that she and her husband are both free to have whatever relationships they want and that they are in the process of divorcing anyway – so revenge is not a motive. 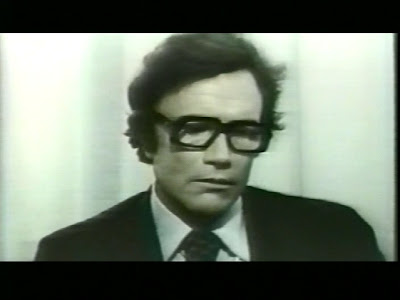 A tired-looking Steffen, a long way away not only from his westerns of a decade before but also the likes of The Night Evelyn Came out of the Grave from earlier in the 1970s 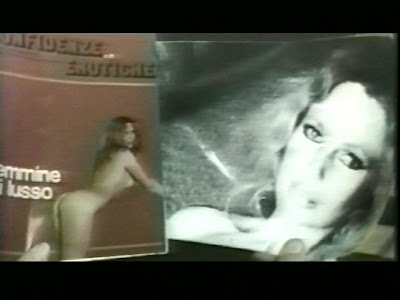 Do you think it's the same woman? 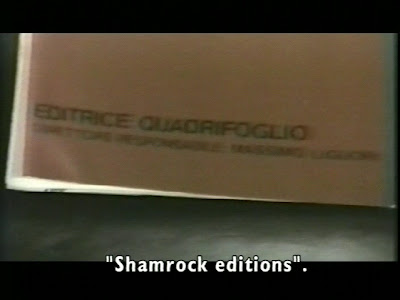 Could this be a clue? 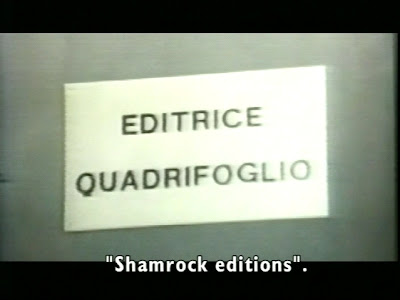 Loredana rebuffs the advances of Willy – talk about obvious names – telling him to come back when he has more money and leaves. Cutaways to an extreme close up of an eye tell us that she is not long for this world and, sure enough, everything goes white as someone then strikes her from behind. It makes a change from black, I suppose, and also allows for a nice dissolve between scenes as we then see De Sanctis and his men finding her car and body at the bottom of a white stone quarry. (Or, at least, it all seems to be white in the Luminous Film and Video Wurks sourced version I watched, whose visual qualities add an extra layer of illicit scuzziness to the whole experience.)

With this avenue of investigation now closed, Luisa decides to go undercover at the Play Motel. Following a likely-looking couple to their room, she enters the office oddly located adjacent to it and, sure enough, finds it has a one-way mirror through which she can observe their games – he dressed as a gladiator type with whip and she playing at being a wild beast, although they soon also get down to business. Meanwhile, a black-clad figure advances along the corridor whilst the intrusion of the camera clicking atop the porno-funk scoring indicates seems to suggest either that Luisa is one of the blackmailers, that the opposite adjacent room is also occupied by them, or that no-one was really paying much attention to such details, presumably figuring that their audience wouldn't either. I suspect it was probably the third case, although since Luisa is then dispatched by the black-clad figure – who dons black leather gloves before garotting her – the second is perhaps a possibility.

While the killer takes Luisa's body to his car park another couple of guests arrive at the desk. While the man (Ray Lovelock) is settling accounts the woman decides to wait for him in their car, prompting the hotel clerk – whom we already knew to be in on things – to surreptitiously signal to his collegue via a buzzer.

As they couple drive away, oblivious to the body dumped in their boot, they argue.

Roberto wants to know why they had to go to play motel to make love – is he being set up as the next victim? – and says the time they spend there could have cost him an acting job. “Big deal, considering the great role the director assigned you” is Patrizia's reply. It's somewhat ironic given that one wonders what Lovelock and Steffen are doing here, along with director Roy Garret / Mario Gariazzo himself. 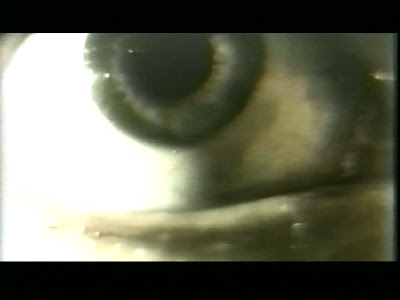 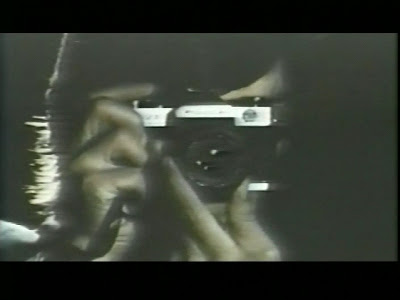 Sure enough their car then gets a flat tyre, prompting the discovery of Luisa's body and the couple, to belatedly get involved with the case as classic giallo amateur sleuths when, observing those in attendance at Luisa's funeral, De Sanctis notices the incongruous presence of an old enemy, Liguori, from his days in the vice squad and needs someone the pimp won't recognise to go undercover at the Play Motel...

They find Liguori and company setting up a tycoon's wife, but for some reason – read, the film-makers need more sleazy contrivances – this isn't enough evidence yet to act, so Patrizia goes to the photography studio pretending to be an aspiring actress / model / whatever and from feeling awkward and modest in front of the camera to seasoned professional in a couple of minutes – either a great actress or to the manner born – whilst the scene goes on far beyond any narrative purpose it had. 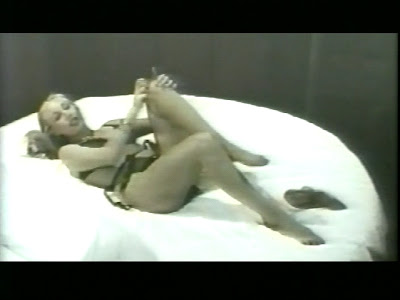 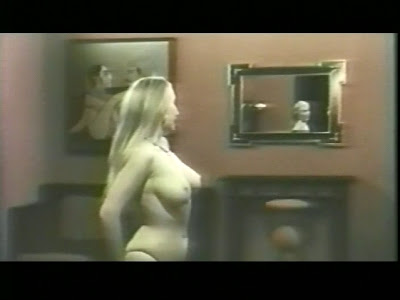 The mirror has two faces 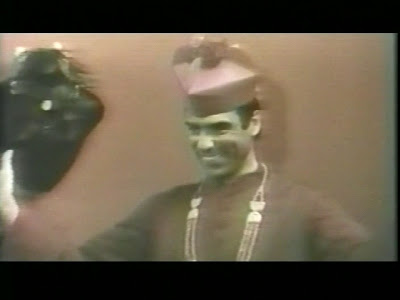 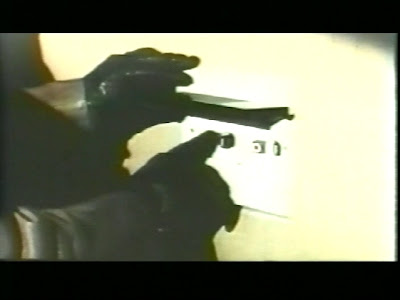 The difference between a good and a bad giallo that emerges is, however, not so much to do with the balance between narrative and non-narrative scenes, but whether the latter have their own raison d'etre as exercises in style over substance or even style as substance. Needless to say those in Play Motel fail on both counts through their lowest common denominator raincoater audience apirations – or, more precisely, the lack thereof. 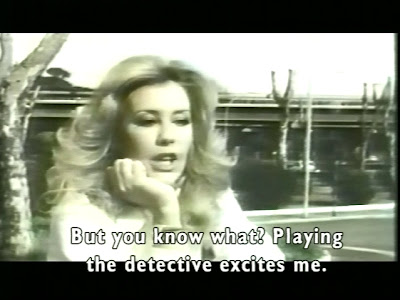 A familiar giallo sentiment, though this is no Bird with the Crystal Plumage or Cat o' Nine Tails 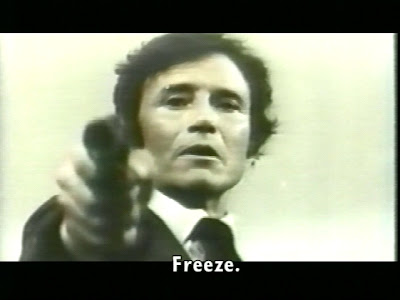 Steffen in “go ahead punk, make my day” mode

As the non-diegetic music and attempts at style kick in, it is again hard to tell what the filmmakers' editorial perspective is in all this, other than a having their cake and eating it hypocritical one – albeit with a similar attitude perhaps manifest in one's own viewing the film with those “guilty pleasure” and “so bad its good” aesthetics perhaps too often covering for a multitude of sins.

One thing Play Motel does have going for it is a modicum of insight into those who would undoubteldy want films of its ilk banned were they ever to appear on the wider cultural radar – note the identify of the figure finally revealed to be behind the whole operaration, or the the family-values respectable bourgeois type who celebrates news of his upcoming dinner with the cardinal by a visit to the motel.

Overall, however, this is a sad and dispiriting example of the giallo in decline.
Posted by K H Brown at 11:44

Where can I get english subs for this?