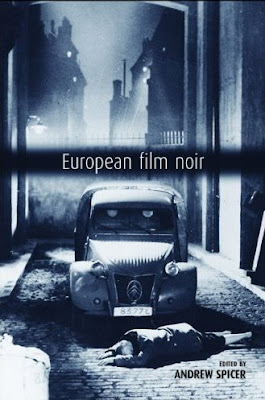 This book examines the history of film noir in five European national cinemas, those of France, Britain, Germany, Spain and Italy. Each country and tradition gets two chapters, the first in each case covering classical noir and the second contemporary neo-noir, with the exception of Italy, given only one chapter for reasons that say a lot about the limited success of the volume as a whole as far as I was concerned.

While there is a lot of interesting detail in the individual chapters with discussion of little-known films and movements that are to be welcomed, a recurring sense I had throughout was that of authors trying to force recalcitrant national cinema texts into Hollywood specific noir frameworks or else producing loose, all encompassing and thus somewhat meaningless redefinitions of noir to suit.

Consider, for example, the opening remarks of Robert Murphy chapter on British noir:

“As film noir is a critical category constructed to deal with a specific group of Hollywood films, it would be surprising to find its characteristic traits fully mirrored in British films. But if one defines noir in terms of films that reveal the underbelly of society, expose baser emotions, concentrate on melodramatic events and represent the world as turbulent and often unjust, than [sic] a substantial proportion of British cinema falls within its scope.” (p. 84)

Thus, by bringing in a combination of violent popular entertainments, Victorian stage melodrama, German Expressionism, French Poetic Realism and American detective fiction he is able to present the Tod Slaughter and Edgar Wallace films of the 1930s in proto noir terms. I don't know about you, but I can't see Slaughter taking much inspiration from Marcel Carné, period.

“There is no such thing as Spanish film noir. At least there is none to speak of until after the death of General Franco in 1975. During the forty years of the fascist dictatorship film noir was a bête noire, unable to show its face for fear of reprisals on its perpetrators [...] Except, as this chapter will argue, film noir in the Spain of the dictatorship was never more insidious and, even by its absence, was never more relevant.” (p. 185)

What we thus really seem to have are a variety of alternate crime cinema traditions – the Spanish policíacas, the French polar, the Italian giallo etc. that while engaging with noir and more particularly neo-noir at certain points, also exhibit as much if not more difference, but which sadly lack the name recognition value and cultural prestige to be considered worthy of serious consideration in their own terms. (Call it the magic of the marketplace.)

This is a picture that that also applies,unfortunately, in the case of Mary Wood's chapter on Italian film noir – tellingly introduced as “noir or giallo?” – as our own special area of interest.

There she first comments on the regrettable marginalisation of popular filone in discussions of the nation's cinema, noting for instance the way in which Fabio Giovannini's literary-based definition of noir and giallo fail to work in the case of Dario Argento, only to then emphasise the most important cinematic giallo tradition to be the giallo politico of leftist auteurs like Francesco Rosi.

Again, it is not that one has anything Wood's argument per se, more that it seems to offer a counter-hegemonic view of Italian cinema to only then snatch it away back from us once more. Yet, crucially, it is not about replacing discussion of Rosi with discussion of Argento. That does not got far enough, since it still sets auteur over filone and risks reifying the form. Rather, we need a more extensive, exhaustive investigation that ideally explores all the different currents of giallo cinema, including what almost was and might have been.

One interesting point that Wood makes in this regard – and one which is borne out by some of my own screenshots here and titles like La Ragazza dal pigiama giallo and La Casa del tappeto giallo – is the symbolic significance of the colour yellow, “the use of saturated yellow tones on film to connote hidden realities and to introduce the intertextual frame of generic conventions into the text.” (236).

If we're looking for a reason why the giallo film took a good 20 years after its noir counterpart to really emerge and why its greatest period of success came after colour had replaced black and white it's a tantalising starting point.

Likewise, might it offer a reason why this particular type of crime cinema should have peaked its Italy just as neo-noir was emerging elsewhere – a reason that, in turn, throw some light on why commentators who note the significance of a Klute fail to see its indebtedness to The Bird with the Crystal Plumage...
Posted by K H Brown at 16:30