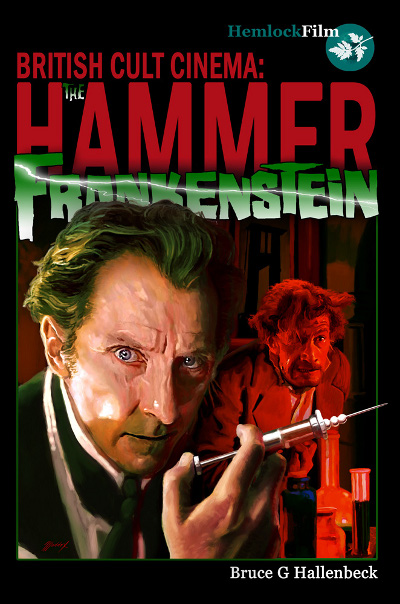 This new book from Bruce Hallenbeck, published by the UK’s Hemlock, follows on from the same author’s The Hammer Vampire.

If the chronology and complexity of producing works on the two foremost Hammer franchises seems a bit back-to-front, given that the studio’s first vampire film followed its first Frankenstein film, and more challenging, in that there was greater variation amongst the vampire films, it perhaps made commercial sense as vampire films were more popular at the time and, if Underworld and Twilight are considered, more popular today.

The Hammer Frankenstein begins with a brief foreword by Veronica Carlson, who is distinguished by being the only female lead to appear in two of the studio’s Frankenstein productions – Frankenstein Must Be Destroyed (1969) and The Horror of Frankenstein (1970).

Following this Hammer scholar Denis Meikle provides a general introduction to the Gothic as a literary genre and the place of Mary Shelley’s source novel within it.

Prior to discussing Hammer’s Frankenstein, however, Hallenbeck first of all devotes a chapter to the story’s pre-Hammer film history, from the Edison Company’s 1910 short through to the Monster Rallies and inevitable encounter with Abbott and Costello in the 1940s. Here, as the author indicates, the Whale/Karloff films are the most important, establishing the definitive look of the monster and that he, rather than his creator, was given primacy. (Subsequently the author does the same with a chapter on the post-Hammer Frankenstein film.)

Both these points were to prove crucial when it came to The Curse of Frankenstein. For, as is well-known from more general histories of the studio, Hammer found themselves with a basic source that was now out of copyright alongside certain aspects which were Universal’s intellectual property, most notably the look of the monster. Hammer’s response, of course, was to both give the monster a new look and to shift the focus from the creation to his creation.

It is through this chapter that the strengths and, to a far lesser extent, the weaknesses of Hallenbeck’s approach come through. Taking the positives first he expertly draws together and selects from the existing and ever-expanding literature (the aforementioned Meikle, Richard Klemensen’s long-running Little Shoppe of Horrors fanzine, Dr Wayne Kinsey’s Bray and Elstree Years volumes, Marcus Hearn’s various ‘official’ studies; Jimmy Sangster’s autobiography, etc., etc.). Hallenbeck also skilfully addresses various facets of the film’s production, distribution, reception, and influence, placing each in their specific and general contexts. In so doing he also crucially manages to give his own critical perspective upon the film. I would argue that it is this that is so vital when dealing with something as well known as the Hammer Frankensteins. This in turn relates to the main failing of the book, if it can be called a failing, namely the extreme difficulty of bringing something new to bear without spending ever greater and less productive amounts of time in the archives or lazily invoking and applying capital-T type Theory.

Against the former – “Do I contradict myself? / Very well then I contradict myself, / (I am large, I contain multitudes.)” to cite Walt Whitman – it should also be considered that the various reproductions of (often annotated or crossed out) key pages from scripts are a delight.

Hallenbeck’s next chapter, on the abortive US television series attempted in between Curse of Frankenstein and its sequel, is perhaps more interesting for the Hammer aficionado. This is partly because its subject is less familiar, partly because ideas first mooted here would be Frankensteined and given new life in some of the later films.

The third and fourth chapters, on The Revenge of Frankenstein and The Evil of Frankenstein, prove similarly strong. Hallenbeck adjudges Revenge superior to its predecessor as a sequel and steers a course between the Scylla and Charibdis of the US/pro-Universal and UK/pro-Hammer camps with regard to the latter, the only entry in the main cycle to be directed by someone other than Terence Fisher.

Turning to Frankenstein Created Woman, Hallenbeck usefully brings out how Fisher’s return was combined with stylistic and thematic innovations, in the director’s modish use of the hand held-camera and the hitherto scientific-materialist Frankenstein now experimenting with the transplantation of the soul. He also notes how the lab sets were less impressive than those of the preceding film, nicely illustrating how low-budget filmmaking is always a creative compromise.

This is also the case when it comes to the final Hammer Frankenstein, where the enclosed spaces of the insane asylum in which Frankenstein now lives and works help connote the sense of diminishing returns that, ironically, echoed the studio’s fortunes (or, rather, lack thereof) at the time.