The author of Teenage Wasteland J.A. Kerswell, has run the excellent Hysteria Lives website for many years. That's a reason to encourage you – i.e. cult film fans – to buy this book. For, in the unlikely event that you're unawares of it, Hysteria Lives is an excellent resource on obscure slasher type films and Kerswell is one of those who deserves to get something back from our community. 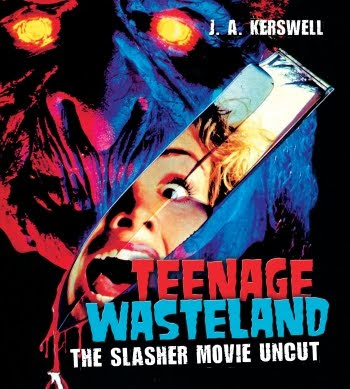 Within the book, the author shows his in-depth knowledge of the subgenre by referencing not just the obvious titles and film historical points, but also such obscurities as the David Hess directed To All a Goodnight (1980) and the Swedish models-meet-a-maniac entry Blood Tracks (1985).

He starts with the Theatre du Grand Guignol and progresses through silent and classic horror, onto proto-slashers of the 1950s, 1960s and early 1970s, taking in the German krimi film and the Italian giallo en route.

Beginning with 1978's Halloween, he then examines the slasher “golden age” of 1978 to 1984 – or Halloween to A Nightmare on Elm Street – on a year-by-year basis, before turning to international and north American developments in the interregnum period before Scream and the rise of the postmodern slasher film.

Crucially, Kerswell also recognises that the self-referential slasher parody was not invented in the late 1990s, but only brought into the mainstream by it.

Teenage Wasteland is attractively put together, with an embossed cover; plenty of illustrative stills and, posters and is even on coloured rather than white paper, with different chapters in different colours (the giallo chapter is, naturally, yellow) and good use of design elements such as pull quotes and boxed facts/trivia.

My main criticism is that I wanted more that was off the beaten track. This is, for me, one of the delights of the Hysteria Lives site: It's watching a film like Derek Ford's Sex Express and looking for further information, and coming across Kerswell's review of it, or reading about the Hugo Stiglitz vehicle Cemetery of Terror on his site and adding it to your 'to see' list.

The difficulty, I suppose, is that broader one between doing a website, where you are not really constrained by space, print costs, considerations of target audience and so on, and a book, where these factors come into play.

After all, your average Waterstones / Amazon customer isn't going to know or care who a Derek Ford is, whereas they will (still) recognise the names John Carpenter and Wes Craven.

Still, give the young slasher fan Teenage Wasteland and, once they get past Michael, Freddy and Jason, they will have plenty of useful places to go next. For myself, meanwhile, it's adding To All a Goodnight and Blood Tracks to that ever-expanding to watch list.
Posted by K H Brown at 22:34