The Art of Hammer

This new book from Titan presents a lavishly illustrated guide to the art of Hammer film posters from the days of Exclusive in the early 1950s – examples of work from the 1930s are understandably hardest to come by – through to the company’s last theatrical release at the time of printing, 1979’s The Lady Vanishes. 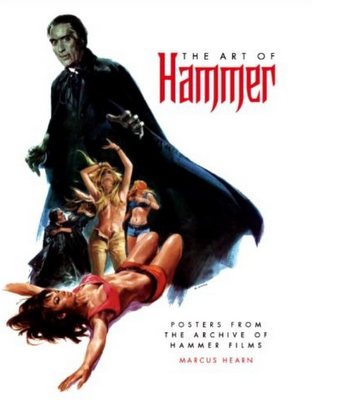 All told more than 300 posters are reproduced, with the designs on display drawn from the UK, US and various other places around the world. France, Belgium and Italy are particularly well represented, though there are also a number of posters from Poland, Japan and Australia as well.

Though primarily something to browse through and admire, an introductory essay usefully identifies some of the main names amongst the company’s British artists. These include the likes of Bill Wiggins, who worked on the founding trinity of The Curse of Frankenstein, Dracula and The Mummy in the late 1950s, and Tom Chantrell, responsible for many of the company’s most iconic UK posters of the 1960s. (The prolific Chantrell is probably most famous for doing the UK Star Wars poster, which as author Marcus Hearn notes, was the only one to feature Peter Cushing.)

The descriptions accompanying individual posters also highlight points of wider interest, like the increasing use of DayGlo inks in the mid-1960s; the controversy over the original UK The Camp on Blood Island poster with its monstrous looking Japanese soldier and “Jap War Crimes Exposed” strapline; the Warhol inspired pop-art leanings of certain US artists; and the existence of folded and rolled versions of the UK Dracula Has Risen from the Grave poster, with the latter being given away to fans and thus more readily available and presumably carrying a lower price premium.

Also worth noting are the frequent differences in the translated titles, graphic elements and emphases of the posters prepared by national distributors and those of Hammer for the domestic market. For instance, the Danish Brides of Dracula poster came from actor David Peel’s personal collection and was apparently the only one to give him higher billing than Peter Cushing, whilst in Italy Hands of the Ripper was distributed as Barbara: The Monster of London.

Such examples also highlight the rarity value of many of the posters reproduced, even for the Hammer fan such as myself: While trawls on Ebay have certainly made many of those present more familiar than they would have been even ten years ago, I had never seen the likes of the Polish One Million Years BC or the Romanian The Hound of the Baskervilles posters, and doubt that many outwith these territories would have done so until now.

Recommended for fans of the studio, though those fixated solely on its horror output should note that just as much weight is given – correctly in my opinion – to showcasing the diversity of its releases, and anyone with an interest in cinema ephemera.
Posted by K H Brown at 17:05

Looking forward to getting this interesting book!