“We will need a lot more hemp before we're through”

Thus sayeth Pag, Yor's sidekick, as they build a raft. But the line could equally be uttered by the viewer in light of the likelihood that a viewing of Yor, The Hunter from the Future will be enhanced by your being in an somewhat altered state of mind.

For, even more so than other Italian sword and sorcery / post apocalyptic / science fiction entries this is the kind of film that it is impossible to keep a straight face while watching.

The film was a co-production between France, Italy and Turkey – with the locales and most of the supporting cast coming from the last, along with a Tarkan-like trash aesthetic – and originally took the form of a four-hour TV series which, like director Antonio Margheriti's science-fiction work in the sixties, was then edited down for theatrical release.

While it's difficult to imagine anyone except the masochistic volunteering to sit through more than 90 minutes of Yor and company, it's also possible that the piece's narrative weaknesses wouldn't be quite so baldly exposed in a longer version. 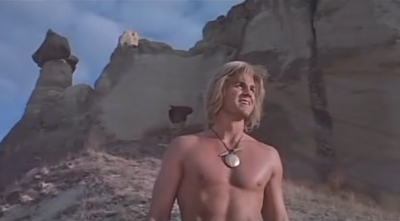 Yor and his world, apparently acquired through incidental / accidental genocide

As it is what we get here are a succession of all too similar episodic, comic-book derived scenarios: Yor encounters a people, learns a new clue as to his mysterious past, and quickly precipitates the destruction of this people like some one-man Aryan genocide machine.

The pattern begins with Pag and Ka-Laa's people: having rescued them from a dinosaur, Yor is invited back to their village for a feast. The tribal elder notices Yor's distinctive medallion and mentions that a sorceress in the poisoned desert lands bears an identical one. There's a spot of interpretive dance, establishing that Ka-Laa has her eye on Yor, after which a bunch of ape men attack. Yor, Pag and Ka-Laa escape, with Pag getting Yor out of a tight spot for the first of many times, leaving the ape men to kill all the elderly, children and men and take the women of breeding age prisoner. (It seems that the humans and ape men's homes are within easy walking distance of one another, begging the question as to why this had never happened before.) 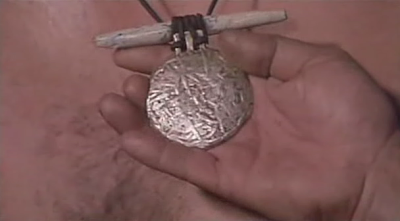 Then Ka-Laa is captured by the ape-men. As luck and coincidence – read poor writing – would have it a passing giant bat provides Yor with a convenient hang-glider so he can cross the chasm to the ape-men's cave. After a spot of fighting Yor then breaks open a dam, flooding the caverns and kill some of the ape men and the rest of Pag and Ka-Laa's people. 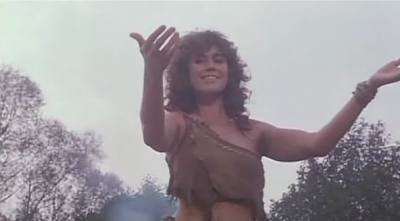 Ka-Laa invites Yor / the spectator to join her

Next Yor heads into the desert lands, where he wipes out the tribe of mutants that dwell therein and takes the sorceress, Roa, with him, leading to some jealousy on Ka-Laa's part before the rest of the ape-men show up and conveniently kill Roa.

Yor's wanderings then them to the ocean front, where yet another tribe gets all but wiped out after a firebird – i.e. space ship / aeroplane – attacks from the sky. The survivors give Yor their most prized possession, a boat, in order that he can seek out the mysterious island from whence the firebird came and fulfil his destiny...

As Pag and Ka-Laa the talismanic Alan Collins / Luciano Pigozzi and the beautiful Corinne Clery are eminently watchable, but also overshadow Reb Brown's Yor with his surfer hairdo and goofy expressions – despite his Flash Gordon-esque theme tune (“Yor's world – he's the man”). 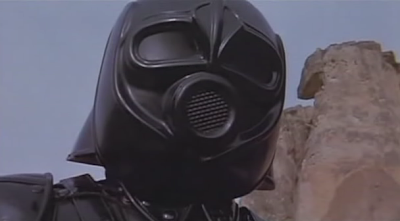 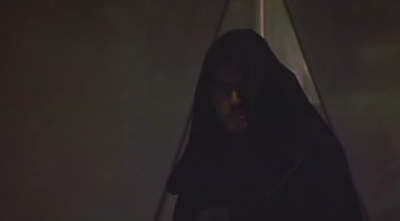 Can we say Star Wars?

Star of the show, however, is the inimitable John Steiner's with his over-the-top caped master villain Overlord (sic) and army of Darth Vader-alike robots borrowed from Aldo Lado's The Humanoid, on which Margheriti did special effects duty.

In the end, however, this is a film whose sheer specialness really needs to be experienced for oneself.
Posted by K H Brown at 12:08