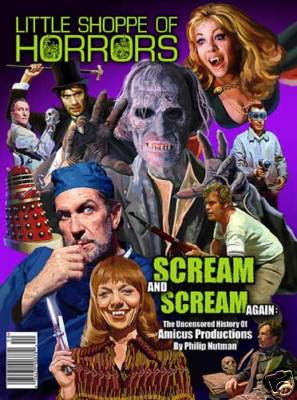 Amicus, along with Tigon, has always been the also-ran of British horror, one of the companies that wasn’t Hammer. Such a label is however unfair to Amicus and thus their two key men, Milton Subotsky (1921-1992) and Max Rosenberg (1914-2004), on at least two counts.

First, it ignores their role in actually establishing the English Gothic, by virtue of planting the seed of what would eventually become The Curse of Frankenstein. Second, it fails to distinguish between their approach and those of their competitors, of recognising the relatively genteel nature of Amicus’s style against Tigon’s preference for shock horror.

This issue of the long-running magazine Little Shoppe of Horrors presents the Tigon story on a film-by-film and period-by-period basis, from the first collaborations between Subotsky and Rosenberg, through to the eventual – and sadly acrimonious – dissolution of their partnership and beyond, to perform a function comparable to the likes of Dennis Meikle or Wayne Kinsey or Marcus Hearn’s respective Hammer histories.

While Dark Side publishers Stray Cat had put out a book about Amicus in 2000, it was less than satisfactory for a number of reasons, as explicated by author Philip Nutman in his introduction – an introduction which also indicates the extremely long gestation of his own study, one dating back to the time when Amicus were still making films!

The first issue with the Stray Cat book was that its primary author, Jonathan Sothcott, took his name off the manuscript after it was drastically edited without his input.

The second, was that it was produced with the co-operation of Rosenberg, still alive at the time, but not the by then dead Subotsky.

Indeed, it also represents one of the reasons why Nutman’s manuscript itself has not been published, albeit with repeated updates and additions, until now. For, apparently thinking that it would present the Subotsky side of the story too much, Rosenberg had repeatedly threatened litigation during his lifetime.

The crucial thing here, as one reads through the 80,000 words of text in the densely packed, profusely illustrated 90-odd pages, is that Nutman plays fair to both men. Subotsky emerges as someone who was simply too naive and nice for the world of independent and exploitation film production and who thus needed a more worldly partner in Rosenberg. They were, as Nutman summarises, yin and yang figures, each complementing the other’s strengths and helping compensate for his weaknesses.

Moreover, if it was Rosenberg’s betrayal that eventually led to the breakup of the company against the harsh backdrop of the British film industry circa 1975, he also seems in turn been to have been manipulated somewhat by others’ shadow plays. (Of note here, but sadly unexplored due to Rosenberg’s reticence to say much about it later in his life, was his youthful involvement in progressive politics in the 1930s and 40s.)

Returning to happier times and the yin and yan motif, Nutman identifies karma as the Amicus equivalent to the Manicheanism of Hammer’s key auteur, Terence Fisher. In Fisher good and evil simply are, with the former invariably triumphing over the latter. By contrast in the universe of Subotsky – as the partner who took the more hands on role in filmmaking, Rosenberg handling the business side of things – is one where evil is more of a mundane and mendacious nature and where, most of the time, it ends up defeating itself. It’s not an absolute formula, insofar as some of the victims of Amicus’s horrors don’t do anything obviously wrong, but does work heuristically. (There are also, after all, non Fisher Hammer films that express a different moral universe.)

Away from such David Pirie or Peter Hutchings style thematic interpretations, Nutman also succeeds in producing a work which will prove extremely useful as a reference guide (which one of those anthology films featured that story with that actor being the perennial question here?); for fans of trivia (the impressive main set in The Skull first saw service, albeit briefly, in Darling); as a source of quotes from the two men and figures like Freddie Francis, and for anyone just wanting to know more about the history of British horror and independent film production in the period from the mid-1950s to mid-1970s.

The cover paintings are beautiful, clearly labours of love in keeping with the text itself and the rest of the magazine.
Posted by K H Brown at 21:52